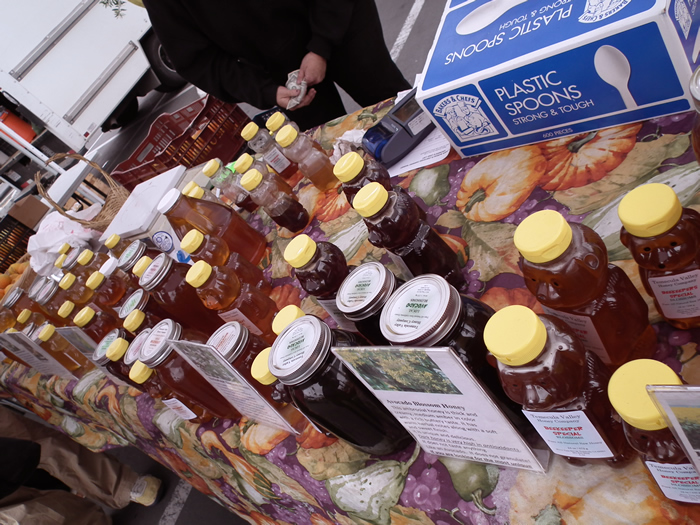 Honey is an amazing food with a rich history of folklore, legends, religions, and mythology. Its historic cultural footprint is global. Honey is frequently a symbol for sweetness of any kind. In some parts of Greece it was formerly a custom for the bride to dip her finger in honey and make the sign of the cross before entering her new home (to ensure sweetness in her married life and relation to her mother-in-law). In pop culture honey derived terms describe a sweet or lovable person. Even the less “culturally sweet” badasses of history had a high esteem for honey. Like the Vikings, who made a fermented drink out of it and called it mead. I’m assuming fermenting it makes it safe for badasses…

Today, the push for backyard beekeeping is also on the rise as honey can be considered the most readily available “local food”, and bees have been referred to as “backyard chickens”. Many people are beginning to do this, and from what I hear it’s a lot of fun. Much like indoor worm farming for home made compost.

In many cultures (old and new) honey has been considered a food as much as it is a medicine. Organic and/or wild raw honey (heating destroys its sensitive nutritive, enzyme, and protein balance) is an excellent source of concentrated nutrients. Honey is rich in phytonutrients (that offer healing benefits and disease protection) chiefly because of its anti-bacterial, anti-viral, and anti-fungal properties. It is also a loaded source of antioxidants, probiotics, and enzymes.
Russian research on honey has indicated that raw, unprocessed honey is nature’s richest source of live healing enzymes, and that honey increases mental alertness, and even IQ.

It is a universally healing food, and recent research is indicating that it can improve sleep by fueling the liver for glucose metabolism during sleep and before, during and post-exercise. In a presentation by Mike McInnes entitled “The Role of Honey in Restorative Sleep”, McInnes stated that honey is an ideal food for accomplishing liver fueling because of its nearly 1:1 ratio of fructose to glucose. It’s fructose that “unlocks” the enzyme from the hepatocyte nucleus that’s necessary for the incorporation of glucose into glycogen in the liver. An adequate glycogen store in the liver is essential for brain fuel during the night fast and prolonged exercise. Without sufficient glycogen the brain triggers the release of stress hormones (adrenalin and cortisol) to convert muscle protein into glucose.
Basically it helps you sleep efficiently. I would even assume that this will help you loose weight because it could curb morning hunger (your body is not starved during the nights fast).
To quote the Report to the Officers and Board of Directors of the Committee for the Promotion of Honey and Health:

Repeated metabolic stress from cortisol produced in excess when there are less than optimal liver glycogen stores during sleep, leads over time, to impaired glucose metabolism, insulin resistance, diabetes and increased risk for cardiovascular disease, hypertension, obesity, osteoporosis, some forms of cancer, and several neuro-degenerative conditions. All are conditions associated with increased oxidative stress.
Not only does honey insure adequate glycogen stores in the liver, but also may play a significant role in reducing oxidative stress via the antioxidants, minerals and other bioactive principles it contains. “Honey is an intelligent food, an informed food”, McInnes stated, “and must be differentiated from other sweeteners.”

The different types of flowers from which the bees forage nectar strongly influence the properties of honey. Different varieties of honey possess a large amount of viable lactobacilli (6 species) and bifidobacteria (4 species).
The quality of the honey is also influenced by the quality of the surroundings, the health of the bees, and how well their caretaker tended them. Lactobacilli not only deliver protective and beneficial benefits to humans but also the bees, and was not found in the bees’ honey stomach during the winter months when bees under investigation were fed sucrose. This indicated that certain bee-feeding practices not only degrade the quality of honey but also may have dangerous and unwanted effects on the bees. Honey is, after all, food made by bees to support all their needs. So it is important to get honey from a source that you know respects its bees. Most commercial beekeepers treat bees with chemicals such as fumigation, smoking out the hives, spraying toxic nicotine-based pesticides on the plants/trees from which the bees gather pollen, anti-fungus, and antibiotics medicines (the later is also known to destroy beneficial bacteria I would assume that the natural ecology of the bees immune system, and stomach suffers because of the loss of healthful bacteria in the bees bodies). The bees immune system is weakened by such treatments, as well as the bees being fed sugars (such as corn syrup), instead of their honey. A combination of these issues have been speculated as a viable culprit for colony collapse, along with the stress commercial bees must endure by being trucked around (to transport them to fields that must be pollinated), the sudden changes of climate bees experience during transportation, increasing the size of the bees to increase honey production, etc…

In summary, if the bees are not treated well the quality of the honey isn’t good.
Honey is very healthy. Bees are essential for the environment (more so than researching artificial means of pollinating crops). Getting honey from a good bee-fair-trade source promotes and supports happy bees, fair-trade beekeepers, and the environment. So have a spoonful!

If you live in Orange County I recommend Ray’s Ranch of Temecula. The farm offers it’s honey at the farmers markets in the area, and the owner sells it personally. She’s literally a talking-walking-encyclopedia and reads like a book with her unbelievable breadth of knowledge in all things bee, farming, and natural. It’s worth going to the markets just to pay her a visit and listen to her talk. 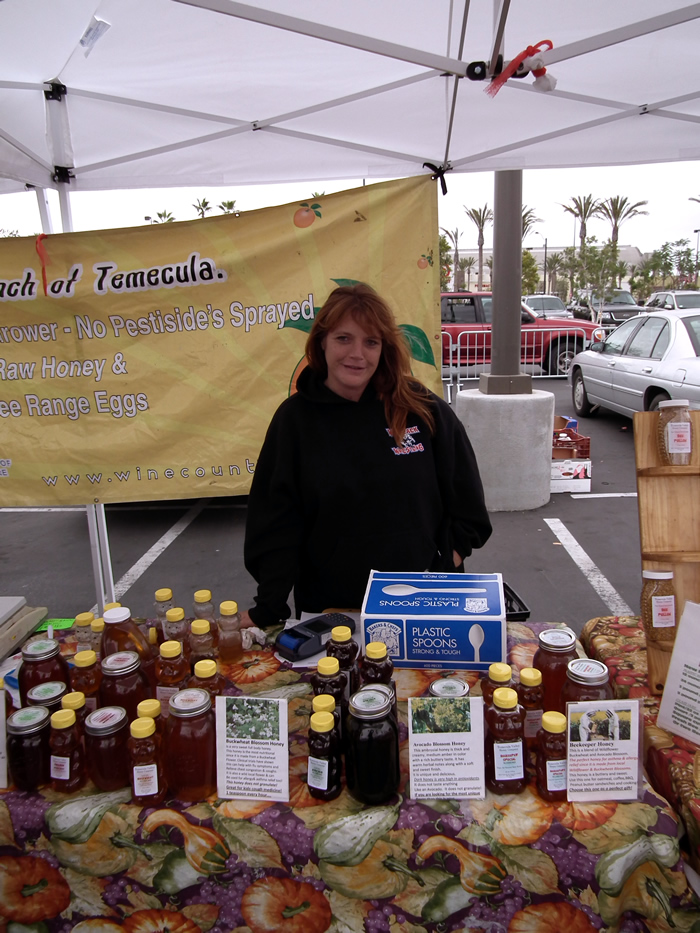 The farm also sells produce grown with optimal love ranging from dates, pomegranates, persimmons, oranges, to squash and cucumbers. They also sell a couple very organic animal products which you can say is “beyond free range” since their animals are allowed to actually roam freely, and often amok, helping themselves to any and all surrounding vegetation. Including that which the farm sells.
They keep goats (which need extra supervision since goats are known to eat your clothes off if you’re not watching) from whom they sell raw goats milk, and raw goats kefir.
Along with goat keeping they also keep chickens which roam about freely wherever they will, and eat freely from the nourishing vegetation. The eggs are sold the day they are gathered and are said to be very rich. She does not wash her eggs so the natural anti-biotic protective coating on the egg (placed there during the laying process from the chicken) is still there and they could stay unrefrigerated for weeks. Remember that eggs in nature are not privy to refrigerators and they don’t go bad in a nest. Washing an egg removes the protective coating which causes an egg to “go bad”. During commercial egg production (organic as well) eggs are washed in synthetic chemicals which make their way into the egg (an egg’s shell is much like human skin, with pores). Organic eggs are washed in chemicals such as Chlorine (sodium hypochlorate). Chlorine can interact with organic materials to form highly toxic compounds called DBPs (Disinfection Byproducts), which can be carcinogenic and mutagenic. Eggs are best bought directly from a farmer that gathered them the day they where sold, and preferably did not wash them (washing or not, refrigeration is still recommended).
True free range products (note that it is a marketing term and commercial free-range is often a sad joke) are not nutritionally impacted by subjecting an animal to an unnatural environment. An animal is, after all, a complex biological organism and it’s body retains toxins, suffers under environmental toxins and other factors, suffers malnourishment, etc… just as much as the human body will. A malnourished or poorly nourished animal can not produce a nourishing, let alone very healthful, product.

Because of Ray’s Ranch of Temecula’s respect for their animals, bees, and vegetation their products are of the freshest, and richest quality. It’s hard to come close to the honey they offer. Tasting each turns into something akin to wine tasting, where you can get lost in the deep flavors and smells.
Ray’s Ranch of Temecula is apparently most noted for its honey. The ranch is located in a quality pollinating area, so the bees are very happy and kept very busy. They sell a variety of fresh raw honeys such as sage honey, avocado honey (the darkest and richest one), mixed flower, true clover (many clover honeys in stores are often stretched with syrup), buckwheat, and bee products like honeycomb in sage honey and fresh pollen. 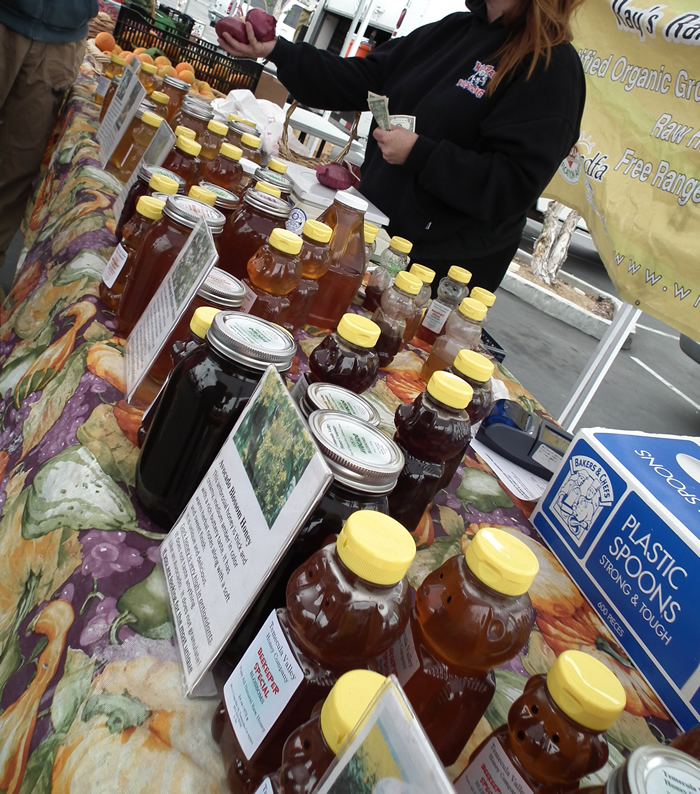 Honey – More than Just a Sweetener

The Honey Revolution – Restoring the Health of Future Generations

These statements have not been evaluated by the Food and Drug Administration.
This blog is not intended to diagnose, treat, cure or prevent any disease.