Lats year at GDC I participated in a micro-talk set about alternative paths to indie development and success.

A friend of mine has a hard time watching videos because English wasn’t her first language, and has been bugging me to publish the transcript since I gave it.
So I’m publishing it here in case others are interested in reading it instead of watching.

My talk was basically about how money isn’t everything, and that the people you influence with your work are also a valuable way of measuring success. For example, how many lives it has changed, what type of difference it has made to the people that engaged with it… Not everything makes money, and money doesn’t always quantify value…

It’s not exactly the kind of thing you want to say at a conference like GDC (the speaker review and youtube comments demonstrated that), but given the abusive labor practices, and other problems we’re facing, they’re probably important points to bring up.

As a VERY IMPORTANT FYI, I have bad speech dyslexia, and it’s especially pronounced when I’m nervous, so I prefer to read for structured messages like this one. I say this because a few people complained about my following a script (speaker comments were that I “seemed angry and detached”).
I’m not capable of presenting meaningful and structured messages without reading.
Depending on how serious the dyslexia bouts are, speaking can be painfully impossible for me.
Fantastic Arcade is probably the only event where I feel comfortable enough for this not to be debilitating. The audience is so wonderful and supportive there.

Quite a few people thanked me for saying this, and told me that they really valued this, so I’m fairly proud of it and my “performance”.

Here’s the video on YouTube if you want to watch it. 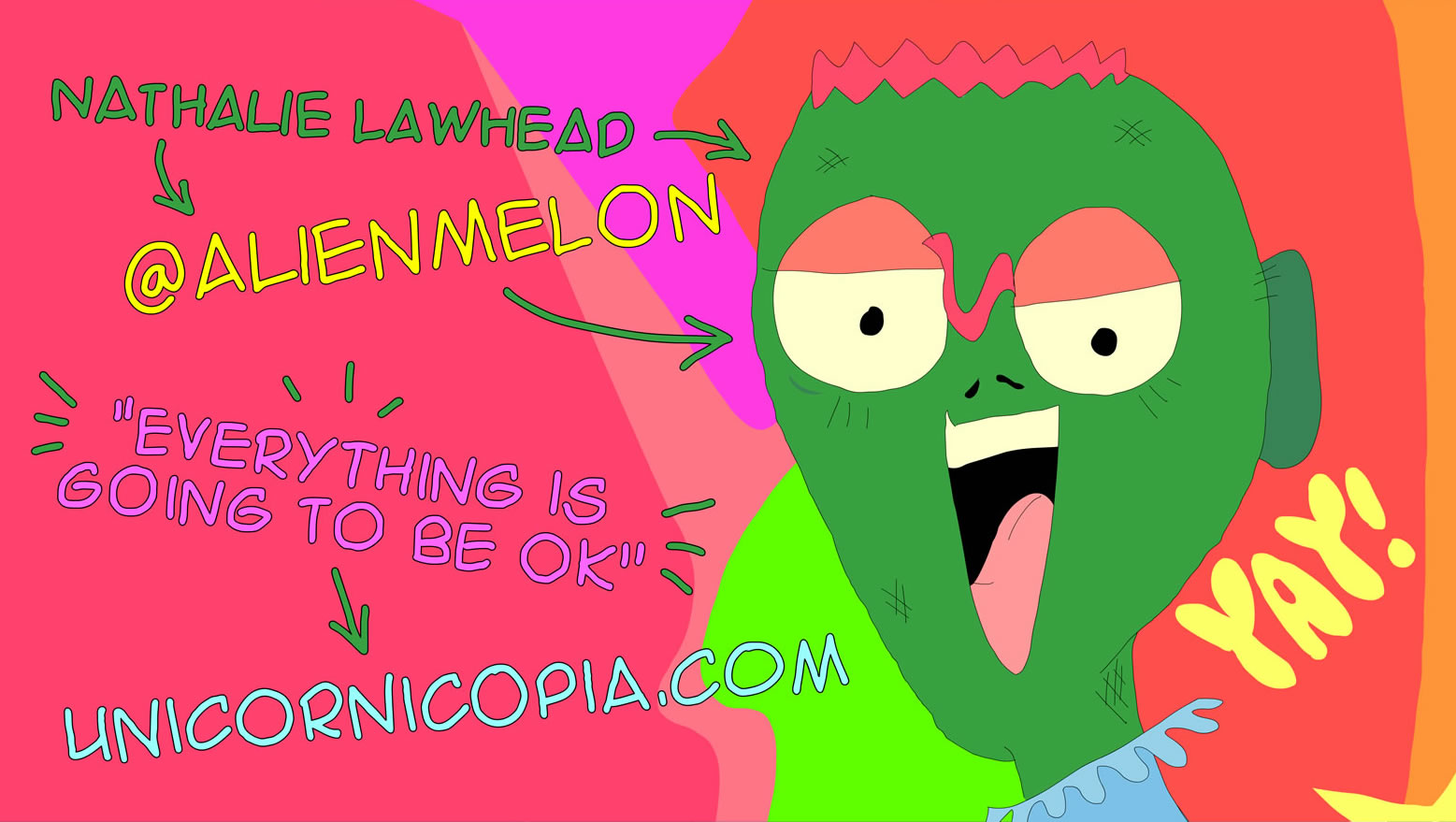 Hi, I’m alienmelon, or Nathalie Lawhead, outside of the internet.
I make art that people call games.

I started doing this in the late 90’s, early 2000’s. At that time it was considered net-art, but my interest in art on computers has always been more complex than that.

My most recent project is “Everything is going to be OK“. 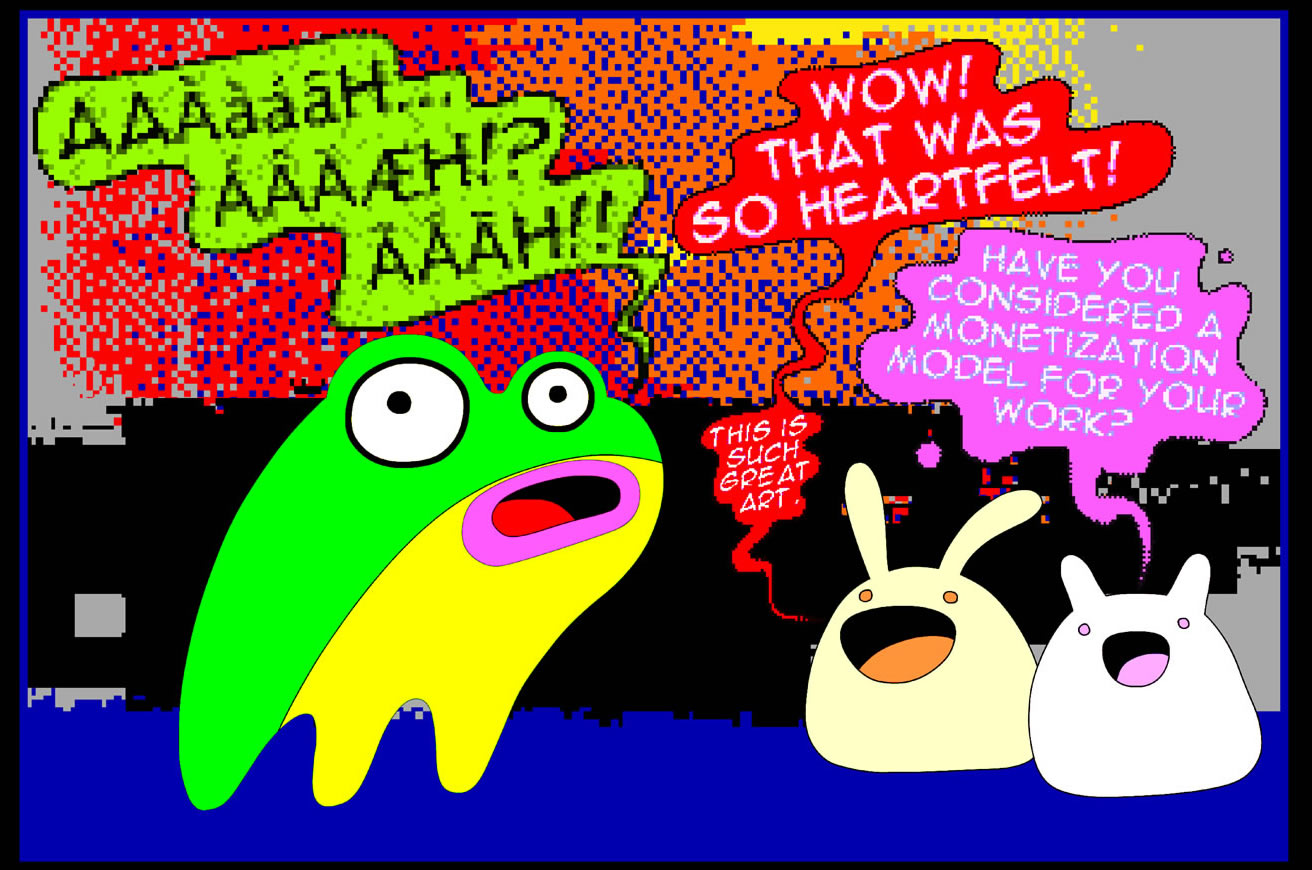 As you can imagine this sort of work isn’t exactly financially sustainable. It doesn’t pay for itself. People do support it, and sometimes pay with the Pay What You Want Option, but I largely pay for making this out of my own pocket.

The pattern my career has taken over the years is to do contracting work, mostly web development, to pay for making this.
I live as meagerly as possible so that all my resources can go into this.
This is my passion. It’s something I have to do.
I view myself as an artist, and making this is my drive.

The conversations of business, and financial success, surrounding my art have been a strong point of contention through-ought the time that I have been doing this.
To me it’s not about the money.
To everyone else it should be, otherwise I am a failure as a functional member of society.

Good work is often measured against how much money it has made in order to be considered good. 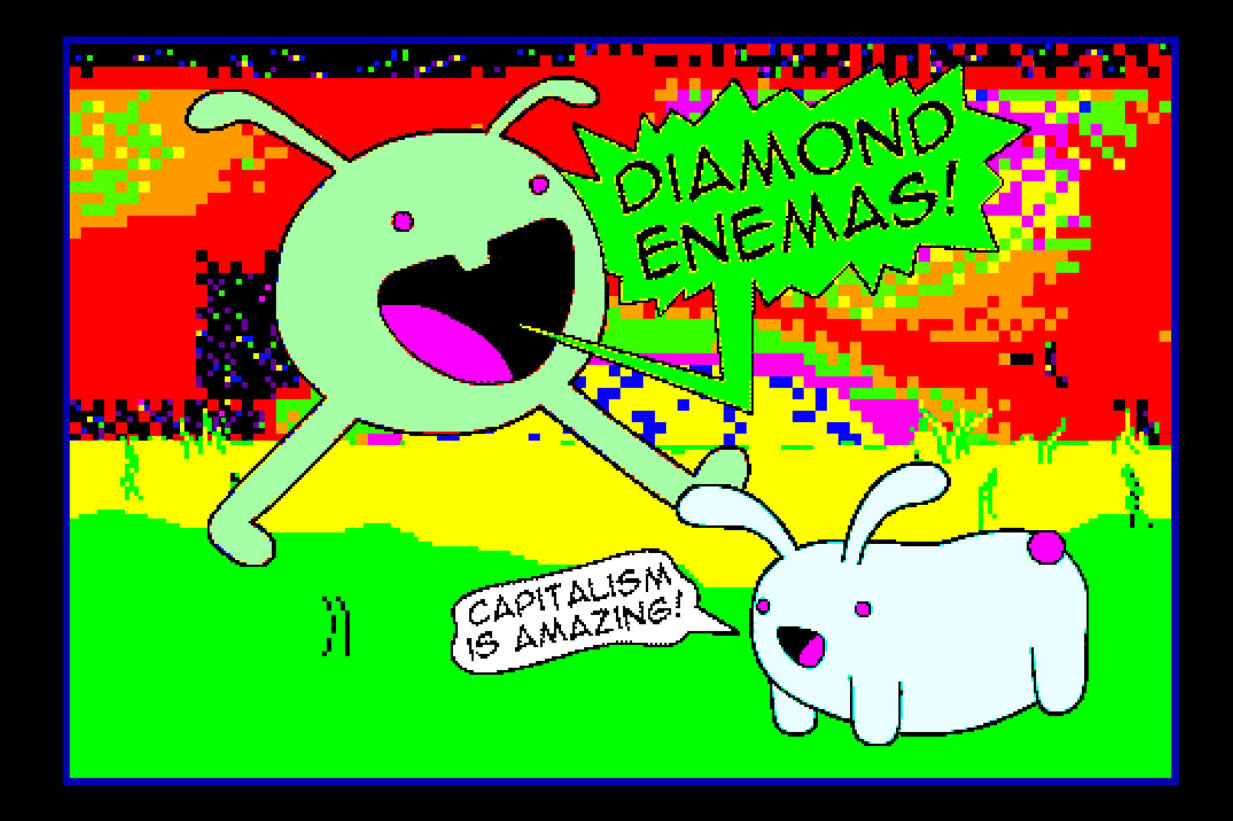 That said, as you can imagine, I’m not a business success,
but I am going to discuss my own personal measurement for success, and the success of my art.

I very much believe that some of the important things in life can’t be quantified by monetary value, and art is one of those.

To me art is about dissent, raising questions, pointing at the beauty of life, or making the darkness in life tolerable.
It’s uniquely expressing views and giving a voice to topics that need to be expressed. Sometimes these topics aren’t popular.

There’s a comfort zone of acceptable, or successful content that people are willing to consume, and I feel like art is about challenging that comfort zone and pushing for more.
Art like this doesn’t sell like entertainment does.
Most art relies on grants, or external support to exist.

For example, my grandfather was a popular sculptor in Slovenia.
His work was strongly anti-capitalist.
Most of his best was socialist inspired commentary about, for example, rich people putting poor people into meat grinders in order to make meals for the rich upper class.
Poor people carrying crosses up a hill with rich people depicted as devils in top-hats mocking them… and so on.
As you can imagine his work would sometimes get him in trouble.

This was true for many artists coming from his background.
Art raised dissent.
On the other hand, this dissent wasn’t a suitable financial model.
But this is why our society needs art.
Art is a conduit for social change. 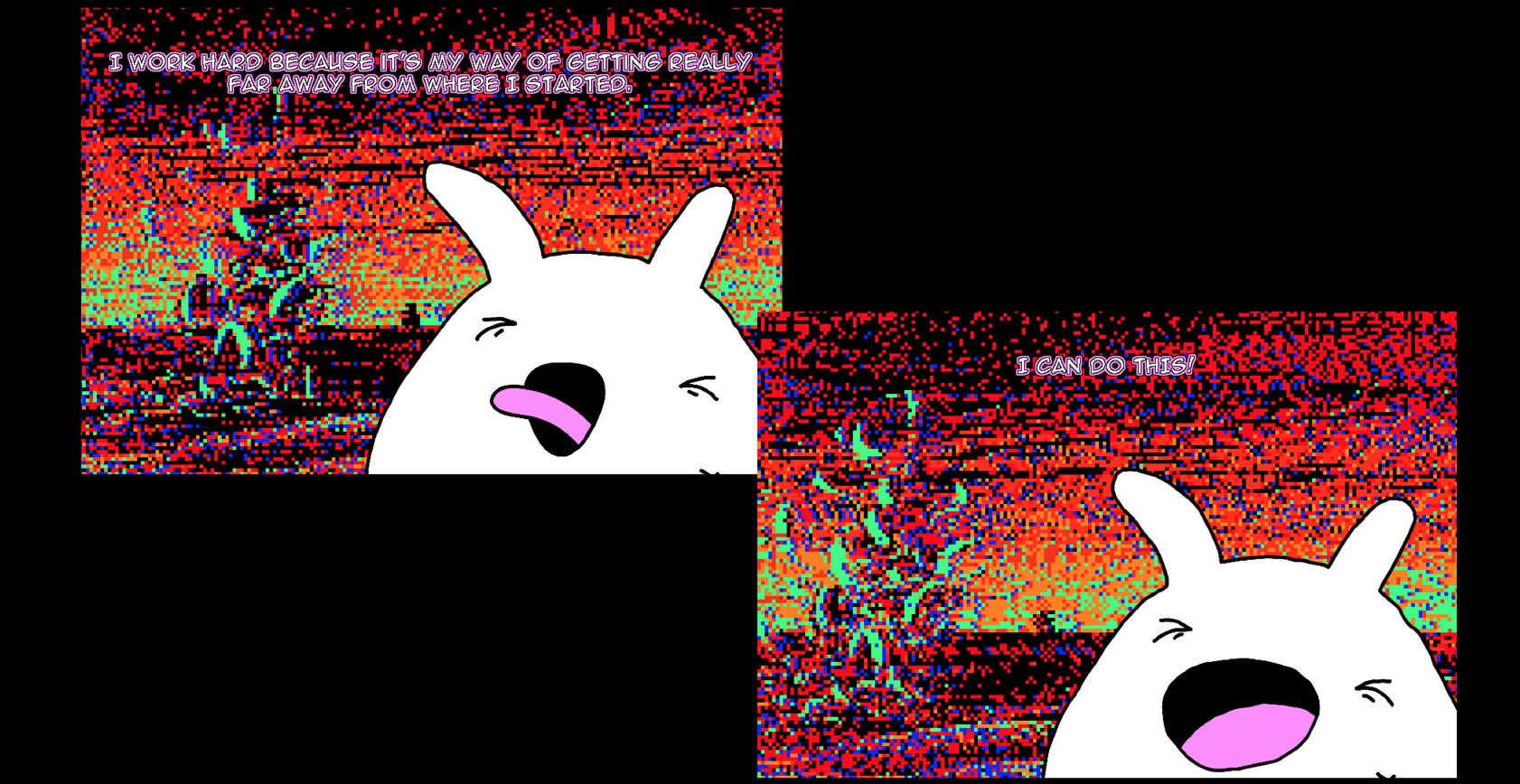 Despite the obvious financial, or social, setbacks artists will make art anyway.
This is not sustainable for me, but making art matters to me because art is vital for the health of a society.

So here is an interesting challenge worth consideration…
Art like this will often not be recognized in the historic timeframe that it is made in, and for.
It will often be laughed at, but these struggles can lead to social change and inspire others to work outside of established comfort zones. 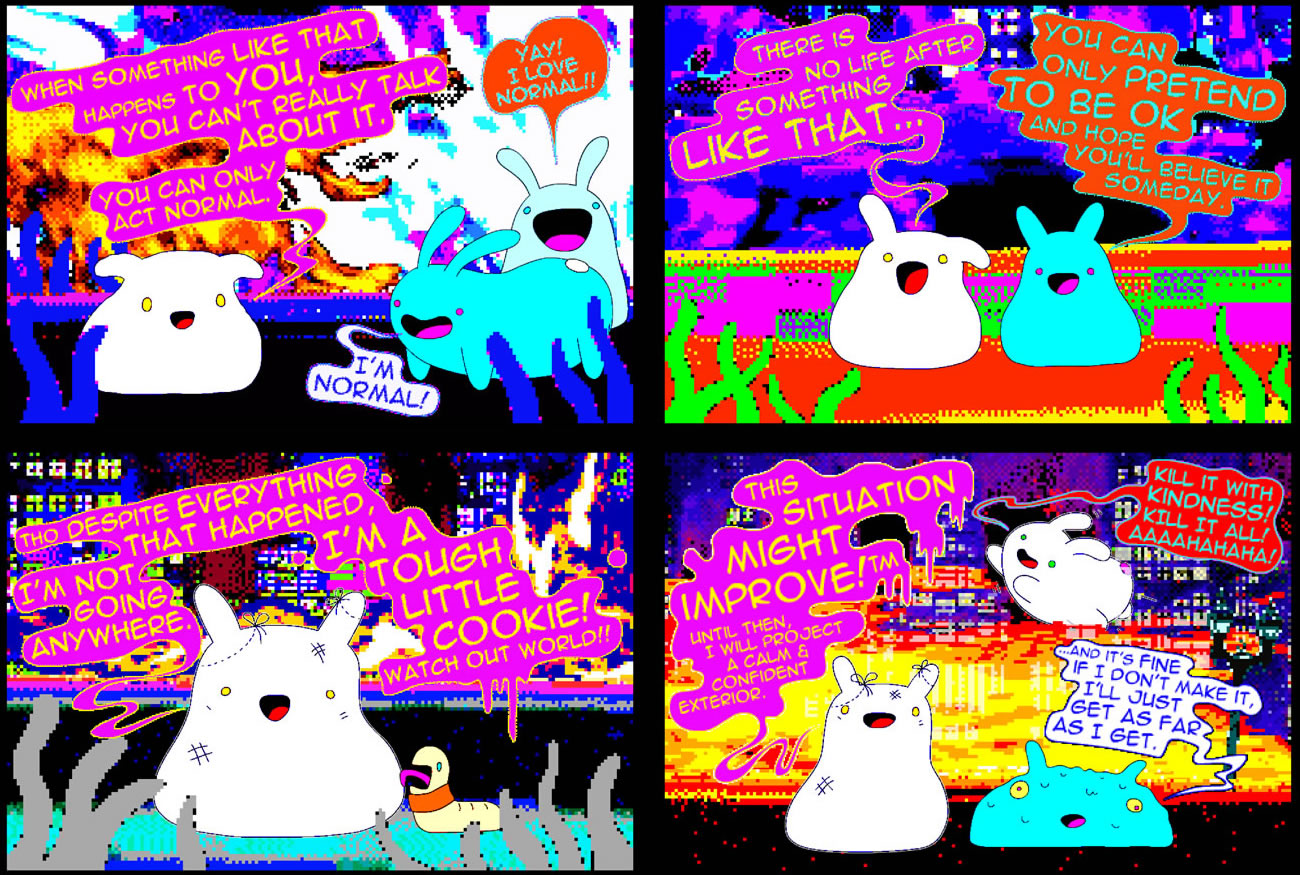 Some messages are too political, too edgy, too controversial, but need to be said anyway.
It’s difficult to weigh money as a metric for success against art like this.

The going stereotype is that many artists die in poverty.
What we laugh at today ends up being the misunderstood genius of tomorrow, who’s work, after death, makes money.
Where they a failure while alive?
Can we recognize this work, while it’s socially relevant?
Did sales define their art’s value?

You cannot place a price on things like dissent. Yet artistic dissent is a critical component to the health of a society and things like this improve life.

Here I don’t think money can define value.
For example, you cannot financially measure sentimental value.
One item might be priceless to one individual, and to everyone else it is trash.

Applying a price on some things may even diminish their value because it does not take into account things like human impact, social impact, sentimental value, or personal worth… 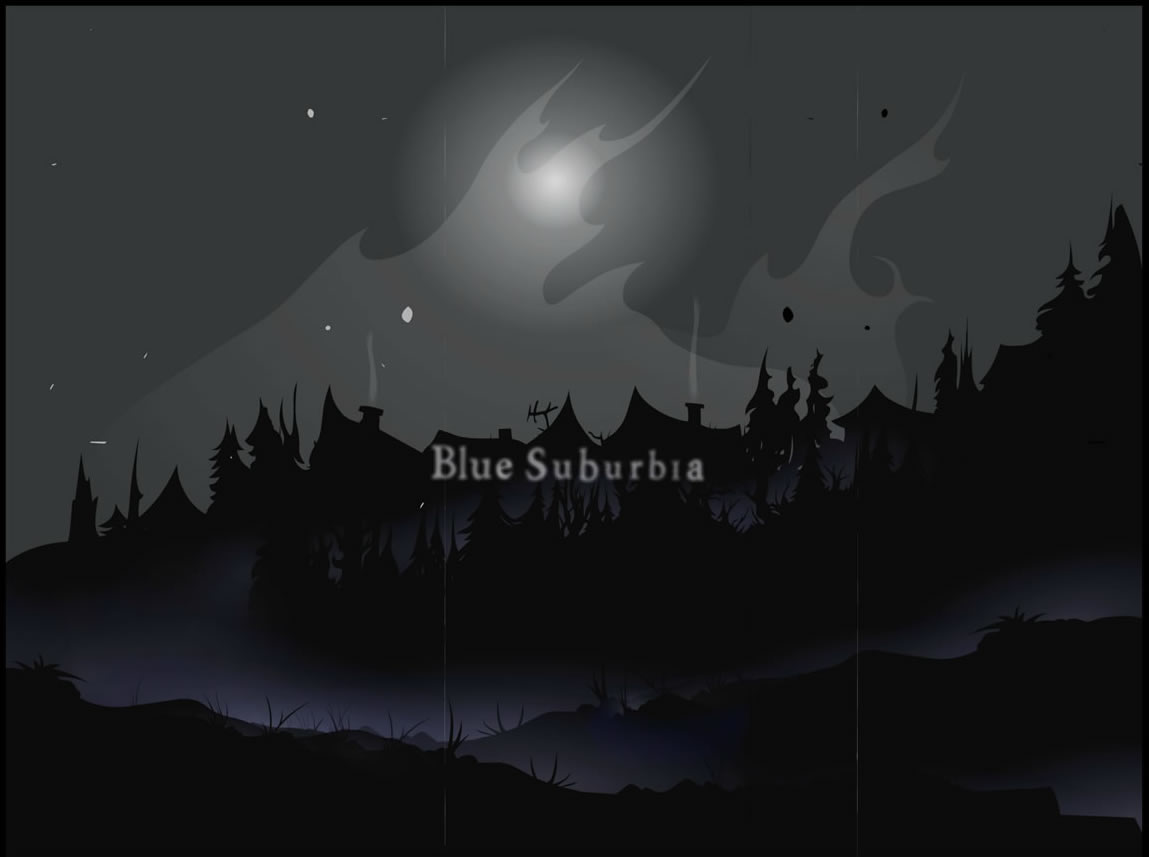 My first project was released in 1999. It was political commentary about poverty, war, homelessness, and refugees.
Most of it was presented as interactive literature.
A combination of an animated feature that you interact with, and “experience” the writing in.
You unravel messages as you interact.
Over the years I have received what feels like thousands of messages from people saying that it has helped them, touched them, changed their life, made them want to pursue a creative career, and often helped them through some serious dark times.
I used to get about a message everyday, because the project had a stylized email form that fit one of the environments.

I’ve also received a handful of messages from people that said that it saved their life.

If you make work that speaks to a deeper human condition, and admits a type of brokenness in our society, I feel like it’s a message of solidarity for others that are undergoing the same.
Many of these emails where very personal. There is something about art that gets people to open up and examine their lives.
Art like this makes people feel less alone. The topics might be dark, but the fact that it admits this darkness speaks to a type of hope.
Even when admitting hopelessness, that admission gives people hope. Like I said, It speaks tremendously to solidarity.

It was a lot to take in at the time, but at the same time it showed me how important it is to make this stuff.

One conversation that I still think about sometimes was a kid in Japan that emailed me thanking me for this project.
They said that they where inspired to make a virtual simulation to help their friends stop self-harming.
Their idea was that if they could do it in a virtual environment, they wouldn’t do it in real life.

On the surface this is very grim, but this was a real problem that they wanted to fix.
This is exactly what art is suited for. Addressing issues that you won’t be able to address in any other capacity, especially in consumer entertainment.
It’s about challenging social stigma, and talking about things we don’t talk about.

It was a very personal conversation, but this is exactly the value measurement that I quantify art against. 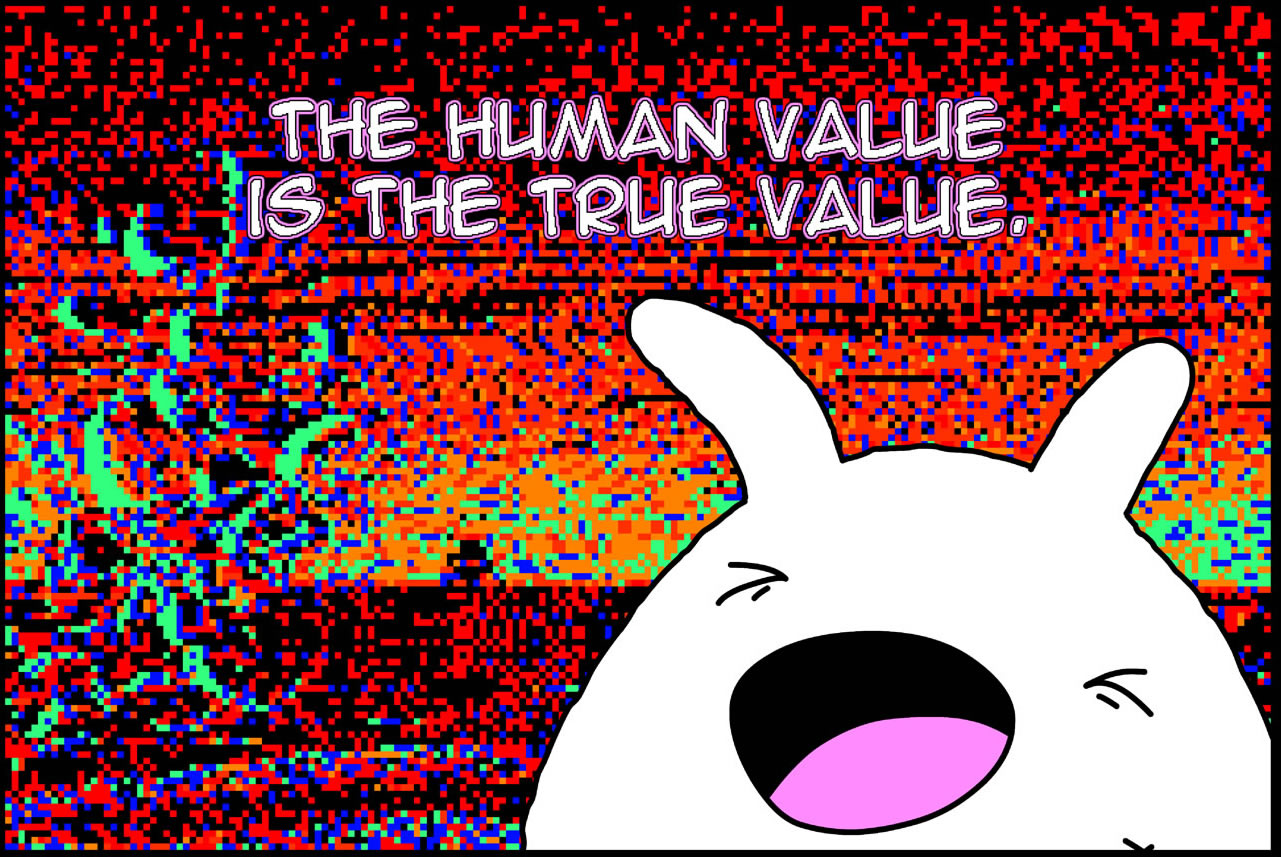 The human value is the true value here.

My peers would criticize me for throwing my talents away on social criticism in my art.
For example, why does something this beautiful have to be so depressing, anti-capitalist, heavy handed, have this kind of message…
At the time, in these commercial circles, it was really uncool to talk about social injustice, poverty, war, and so on…

This was a very commercial crowd. They were, by popular standards, very successful in their business.
Why risk appearing opinionated, and controversially so, if you can make money?

Challenging things is risky, but it is exactly this risk that makes art so valuable. 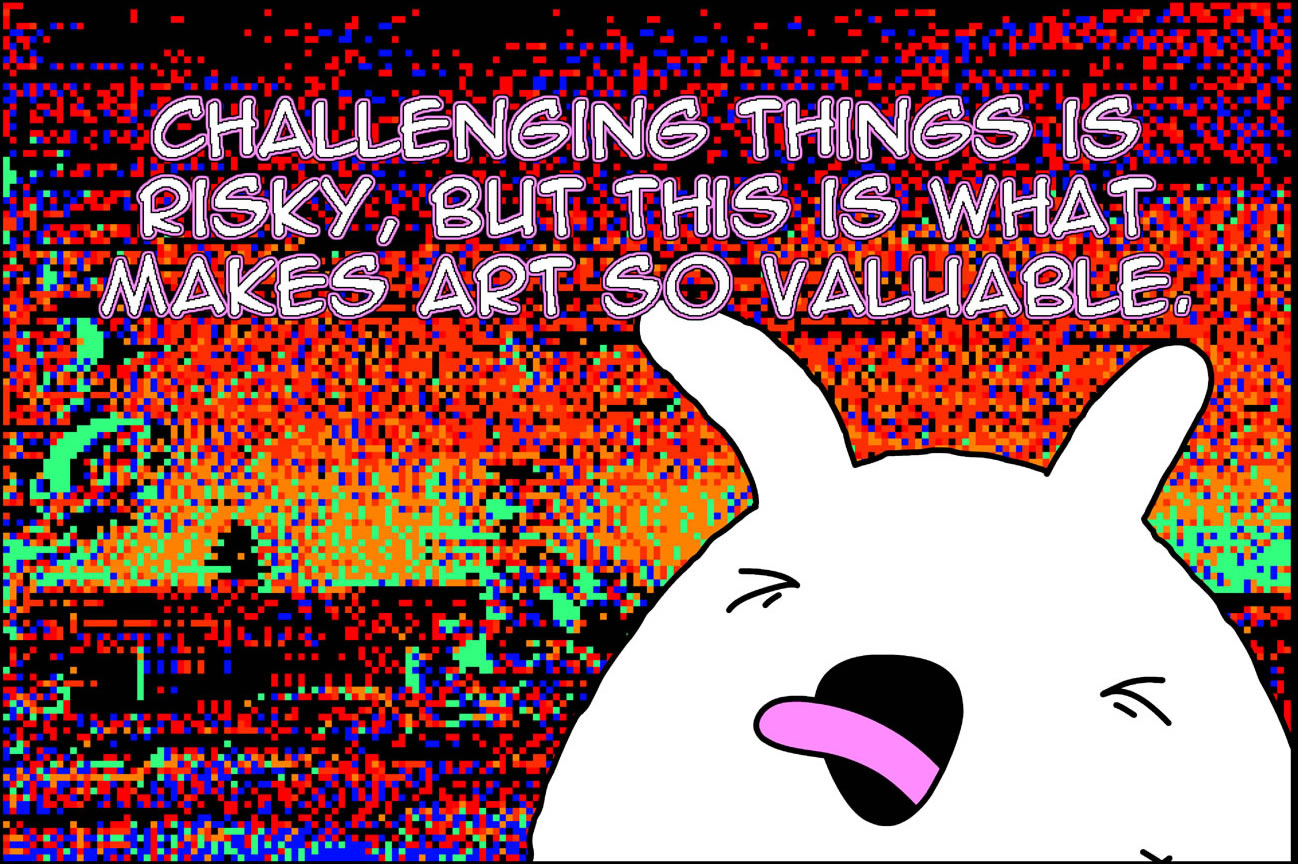 So it was an interesting contrast.
To my peers I was a failure and waste of talent, to people that played this, I changed their lives.
So how do you place value on this?

If I quit pursuing this art, I would be a successful creative professional.
If I pursue this art, then I am socially viewed as lacking ambition, or wasting my talent.
How our culture dictates value has always fascinated me.
If we didn’t measure value by money, then I feel like art would matter more.

Money serves a purpose but it isn’t the end all defining factor of success.

To me, lives touched, people influenced, making the world better is what matters.
As artists we have a social responsibility to do that. 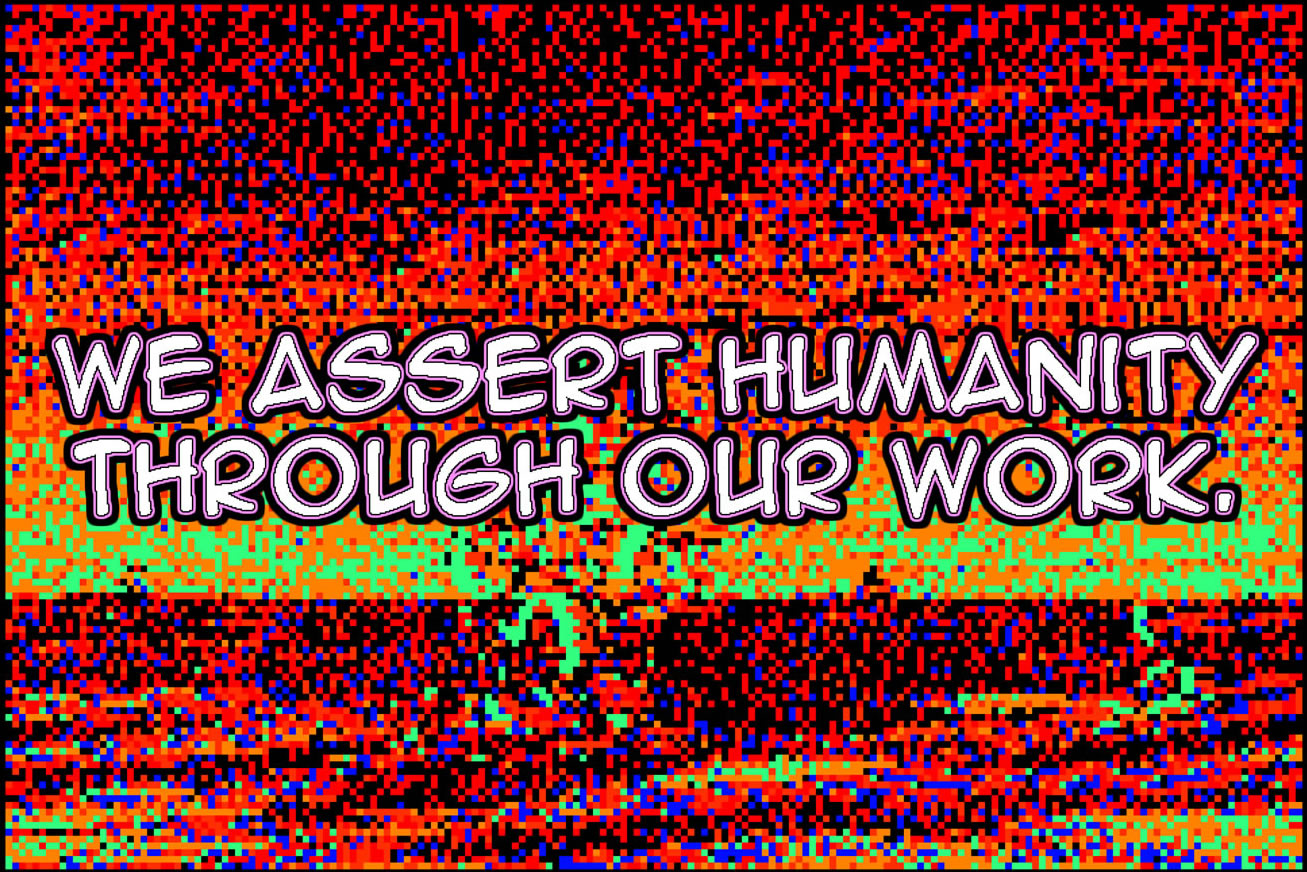 I realize how cheesy that sounds, but this is why I do it.
I believe artists should exercise their talents in a way that will make the world better, bring social change, or challenge people to be better.

We assert humanity through our work.

There is something valuable to be learned from art, and artistic dissent, in regards to how we measure: business success, financial success, or even entertainment success.

The bigger picture here being how we can help society, and benefit those around us through our work. 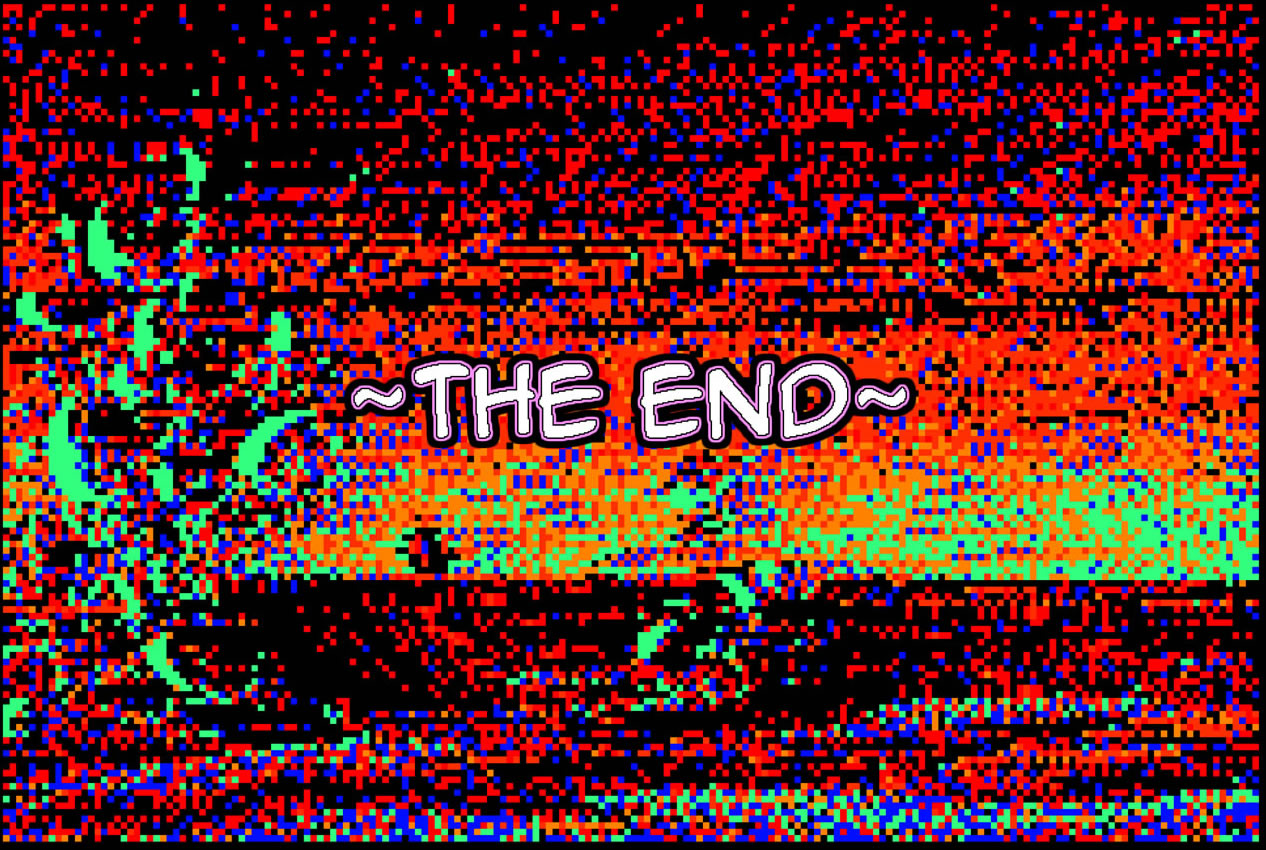