The newest update for the Electric Zine Maker is out! This marks the one year anniversary of the Zine Maker… It’s one year old. They grow up so fast!

You can download it on itch here, or GameJolt here.

I’m really proud of this one. It’s a tools update, but it feels like a major milestone because It Got Done.

I took a step back from the Zine Maker, earlier this year, to build the story world for it. That’s the ARG that I’ve been talking about. You can check out the itch page for it here, and play it.
When I first launched the Zine Maker I said that I wanted to make something of a story, or a game, surrounding it. Like it exists in a fantasy realm, and you’re using this tool from this fictional digital space. So that ARG is that. I’ll be building on it more too as I build on the Zine Maker.
The purpose of the Electric Zine Maker has always been to be a cute little thing that exists to cheer people on as they create. I feel like it existing in a fantasy realm will help that. There’s lots of space now to make it even cuter! 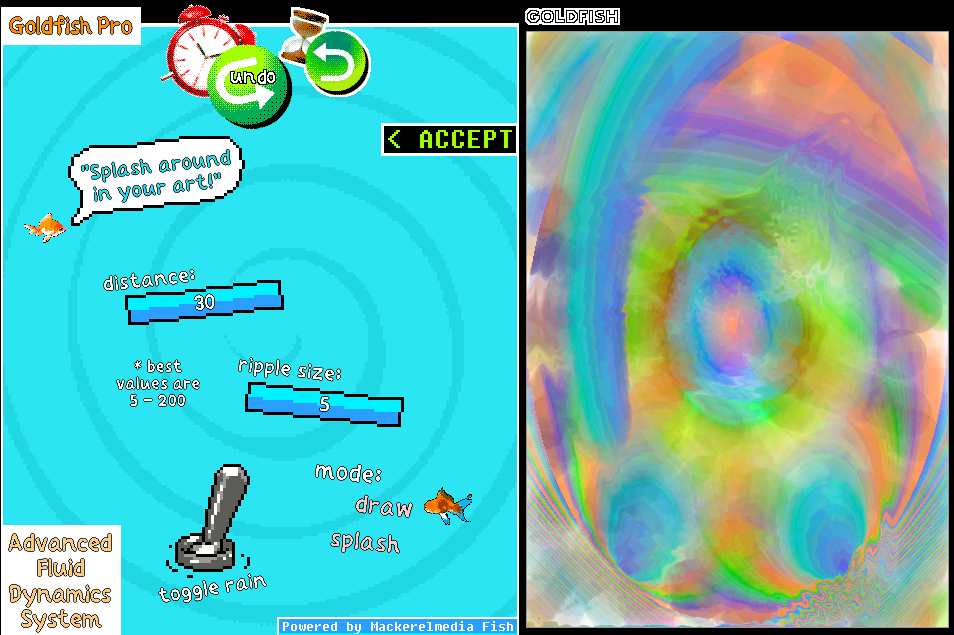 This new Electric Zine Maker update features four new tools, and a bunch of bug fixes. It also links directly to Jeremy Oduber’s HTML5 Template for the Electric Zine Maker. I’m really happy that someone took the time to make this. It’s a beautiful job, and really cool that I’m able to finally link to it so that people can find it.

The new tools are really fun. One involves submerging your art in water and splashing around in it. It’s possibly useless, but it’s actually kind of fun to act like a kid stomping in rain puddles. This tool is more of a joke (like the Scream Into The Void feature).
The tool that I’m most proud of is the Animated Gif brush. With it you can import an animated gif and paint with the animation…

I wrote a devlog about all this here. You can go read that for more detail.

I’m really happy to also be able to officially announce that the Electric Zine Maker got a grant to support its open source initiative! Thanks to the sponsorship in part by the Clinic for Open Source Arts (COSA) at the University of Denver, I’ll be open sourcing the tools.
That’s my next thing that I’ll be investing time in. You should get some early github releases soon…ish, and I’ll write a proper blog post about the direction and philosophy that will drive it… when all that is ready.
Like I said in my devlog, I built this never thinking that anyone will see the spaghetti mess that the code is. Since that is now a reality, I’m going to take the time to clean it up and do it right so that it can be a usable resource to folks.

On my mind lately has been the growing flack I’m getting for the inaccessibility, or disability concerns (the hateful stuff, not the actually nicely phrased ones, thank you for your feedback).
The positive feedback in regards to the Electric Zine Maker’s UI largely eclipses the negativity, but I feel like it’s important to talk about this before it spirals out of control more.

Last August, right after I came out with this story, some angry person on Twitter noticed my Tweet about the Zine Maker and then noticed some of the comments complaining about the flashy colors in the animated gif. She took to yelling at me for “hurting people” and chewed me out for being anti-disability, with some threatening legal talk sprinkled on it.
My sister saw how this was fucking me up and decided to follow up with the people that complained about the flashy colors. All but one didn’t even use the Electric Zine Maker. They just didn’t like the animated gif… so none of the people that complained in this case (including the threatening person) even used the Zine Maker.
Since then I guess the rumor that I “hate disabled people” because my itch pages are too colorful, the comment section spins (therefore I am anti-UX), and the Zine Maker features weird animated UI… started to propagate more.

I would like to make clear that I do not hate disabled people. The intention of my work has never been to hurt anyone. It exists for a very specific reason, and is for very specific people that have a taste for this type of experimentation. It’s important that weird things exist too.
I don’t feel like repeating myself here. I wrote a thread about all this, which you should really read if you’re invested in yelling at me for this.

ok look everyone
my work is fucking FREE
i make very little if anything from it
i am NOT a public service
the weird ass UI, colors, the fact that it's this different, and what you view as “inaccessible”,
is important to me
(read this whole thread please before yelling at me more) pic.twitter.com/Qp1Maz2y74

Computer culture is incredibly exclusive to just commercialism. It’s oriented around The Consumer, and it’s impossible to step out of line without it being “a thing”. This makes it very conservative. The fact that something might stand out from the norm often means it’s more controversial than it really is (the same can kind of be said for games). I think a big issue here is that people expect it to fit within “normal” (standards created by corporations that inform current design trends).
My work is not that, and has never been.
Usability and UX don’t just fit that one mold normalized by large commercial entities. Good usability is something that should serve per-case, depending on the goals of the creator.
A lot of work has gone into making the Zine Maker usable, and approachable, for the use case it is intended for. It’s optimized to work on older machines (this is rarely ever done!), it’s made to be visually disarming (something you can’t take serious, and something that lowers expectations and therefore mitigates creative pressure), it is meant to be appealing to children (while keeping adults in mind) so that is the reason for the bright cute color choices… all these things are UX design and usability.
Not everything can be Photoshop. For the purpose that the Electric Zine Maker is trying to fill (a toy that’s built around casual creation), Photoshop isn’t “usable” or friendly. There is a clear need for art tools that are anti-utilitarian. The Zine Maker is not meant to encourage commercial professional creation.
It’s a space to explore creativity in.

There are viable accessibility needs that have been brought up, which I do take to heart. The UI does need an overhaul to make it accessible to those folks BUT (and this is an important point) I am only one person working on this. I’m stretched very thin. If I have to choose between features, I will probably choose the one that’s easier to do (for now) since there’s so much that needs to get done.
I can’t promise or make guarantees toward the audience that is asking for this. I just don’t have the resources to make a thing that pleases everyone.
Even when it comes to other indie devs, they often have a lot of help, a publisher, and resources, to make these things happen. I don’t have any of that.

There’s often a point that gets raised that “if you can’t do it right, then don’t do it at all, because it’s alienating people”. I think it’s important to step back and really consider what you are saying with that. This sort of thinking is in line with gatekeeping, where the only people that end up having a “right” to make things are larger entities or more privileged devs. It’s basically telling smaller folks, who are poorer, who are just artists exploring a certain topic, that they should not exist. This argument in itself comes from tremendous privilege. Technology is a democracy that everyone has a right to be part of. Somehow we’re slowly settling on the mentality that only an elite few (people with advantages and money) are allowed to participate. This is really harsh. Under these circumstances you will likely not even have an Electric Zine Maker that you’ll want to use and also complain about. You’ll only have things like Photoshop.

UI design is a complicated thing to do right, especially for experimental circumstances. Some may see a bright goofy mess, but the way this has been designed is structured to convey a message.
For example, the slider in the drawing UI is intentionally “loose” to make the thing feel like a kitschy kid’s toy.

A UI design overhaul has always been part of the plan, but that is something that will get done once the other things in the Zine Maker are finished. UI is something that’s best done when everything else is figured out, otherwise it’s just too much work to constantly change it.

Ideally I would implement themes. This is something I really want to do, but can only get done at the very end. This way people can make their own UI for the Zine Maker and share those. This will also fix the issue of what people expect from it. You can do it yourself! This totally fits in the DIY culture part of it… That said, this is in no way in the near future.

Ok, that’s my update for now. Thank you everyone for your support and enthusiasm for it! I’m so happy that it’s meant this much to folks!