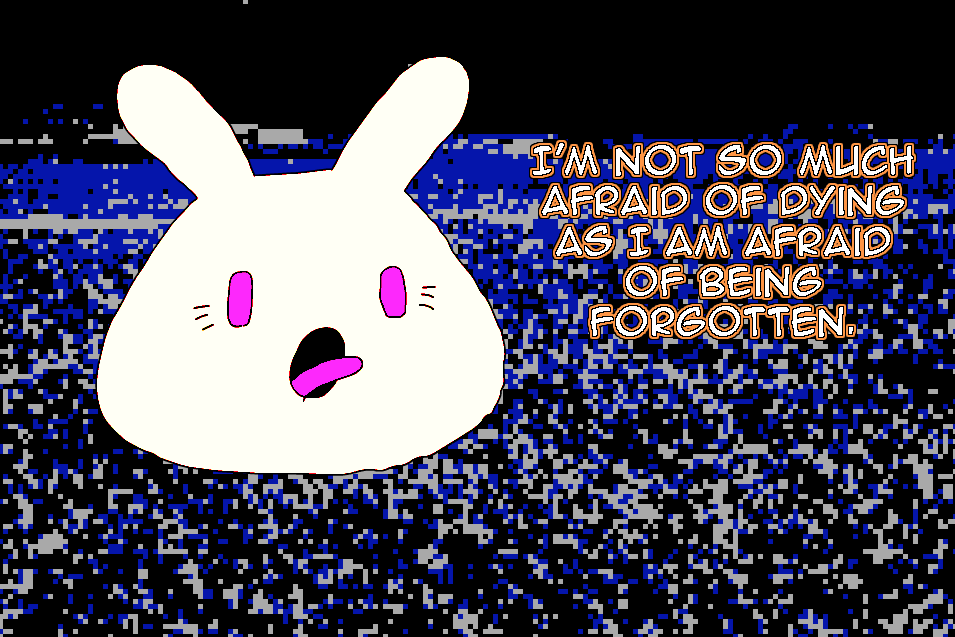 I’ve been totally avoiding watching Lets Plays of my work. It’s funny, but I used to like seeing people exaggeratedly yell “what the fuck” at my stuff, but after a while it kind of gets to me.
I don’t know why. I guess it’s kind of hard seeing something you put so much into being reduced to a joke?
A friend was looking up videos on something I made and I found myself fighting the urge to leave the room so that I wouldn’t have to listen to what the Lets Player was saying. I know that’s a bit over sensitive (admittedly I’m going through a bit of a burnout), but it’s kind of a strange change. I guess I don’t have the patience to understand the culture anymore…
I kind of understand why some developers hate the label “weird” for their games. It’s been feeling like a cheep and easy label to slap on something because you are too lazy to “look deeper” or understand what this different experience is. Like “weird” is more dismissive than an actual description of something.
I’m really serious about “games as art” but the longer I spend in games, the hardest thing to put up with are the players… or people outside of the “developer” circle. I guess you would call that the consumers?
If I’m serious about it being art, there’s a lot of fighting that has to be done to shed the baggage that the medium being seen as “consumer entertainment” has.
The idea that we have to run from one “weird what the fuck” thing to consume/play to the next, without really putting aside a space for it (like art requires), where we admire and appreciate it as part of a greater history… is really hard.
I don’t like how much of an easily played through, laughed at, tossed aside, then moved on from vibe it all has.
I mean, I did sculpting… some of my stuff was in a regional museum… I forget what the term is (it’s late sorry). What struck me about watching people look at the work was that people really took time to look at the work.
There was a space for it, and a conversation around it. People took time to understand it. I would almost go so far as to say they respected it. The same for the painting, and poetry that I did a long time ago. Games are harshly different in that sense.
There is work done on carving out that space, but it feels like a struggle that’s really being pushed against.
I get pretty worried whenever I hear that some journalist or critic is leaving. I feel like those people are very critical for how far the medium has come in terms of that “respect”.
Geez, if it wasn’t for them then I would have to go back to my “weird freak” art corner and be doomed to obscurity… and laughed at… Hmm… such an artistic fate.
But I mean, on a serious note, if it were not for someone like Leigh Alexander writing about the “Electric Love Potato” I honestly don’t think anyone would care. Same goes for Rock Paper Shotgun, or Warpdoor when they mention my games… There was a long period (before I really pushed hard on getting noticed) where I released work and nobody cared. The people that did play it usually thought it was freaky, weird, or were convinced that I had mental problems. Games have a lot of baggage. Calling your art a “game” is kind of dooming it to be weighed down by that.
Different games need a space, and people willing to look at them critically.
It’s funny, but this is all why I find it so much easier not to call what I’m making now a “game”. It’s “interactive art”, an “interactive experience”, or just “experience”… Pick anything but game, and I feel like a lot of that pressure goes away. I’m ok with others calling it “game”, but if I do it gets kind of scary.

I don’t know… things on my mind lately.

Maybe I’m being more dramatic about this than usual because I’m kind of struggling right now. Hmm… indie is hard. Who would have thought.
I’ll be so grateful when/if I manage to push through “Everything Is Going To Be OK“!
It’s come so far!
It’s so big!
I CAN DO IT!
I’m dealing a lot with the realities, and resurgence, of sexism. It’s a constant reality. Keeps me up at night. Good times! Tho I should probably be used to that by now. I really need to come to a point where I am more determined than depressed.
It’s a special turning point where you stop being victimized and start being a scary bitch. I want to be a scary bitch. It’s on my todo list.
I’m really worried that maybe I should have hidden the fact that a woman “did these games” and kept closer to my alias. Maybe I wouldn’t struggle so much? I have no indication that indie games are like that. They have been a total opposite to what I’m used to (super supportive, welcoming, and willing to talk about these issues), but part of me realizes that outside of the protective indie game circle I’m not going to succeed… on the other hand I don’t really care. When I started at this, with Tetrageddon, I decided that I’m going to get as far as I can. It’s a good goal!

I had an empowering talk with a woman in film. We talked about sexism. She basically pointed out how sad of a compromise it is when women de-feminize their name (make it sound like a guy name) for the sake of their work being taken seriously. What struck me was how she made it sound like a creative compromise. That was really profound.
I spend so much time being a good creative anarchist and making stuff that fights definition. I am OK with being misunderstood, but I’m afraid of people knowing a woman did that? It doesn’t make sense. It really is a creative compromise, so I’m not going to do that.

On the upside I have plenty of inspiration to draw from for “Everything Is Going To Be OK“. So maybe all this is an ideal setup for making a game that is basically about being super thrilled about having a hard time… sarcastically… and begrudgingly… but thrilled nonetheless. 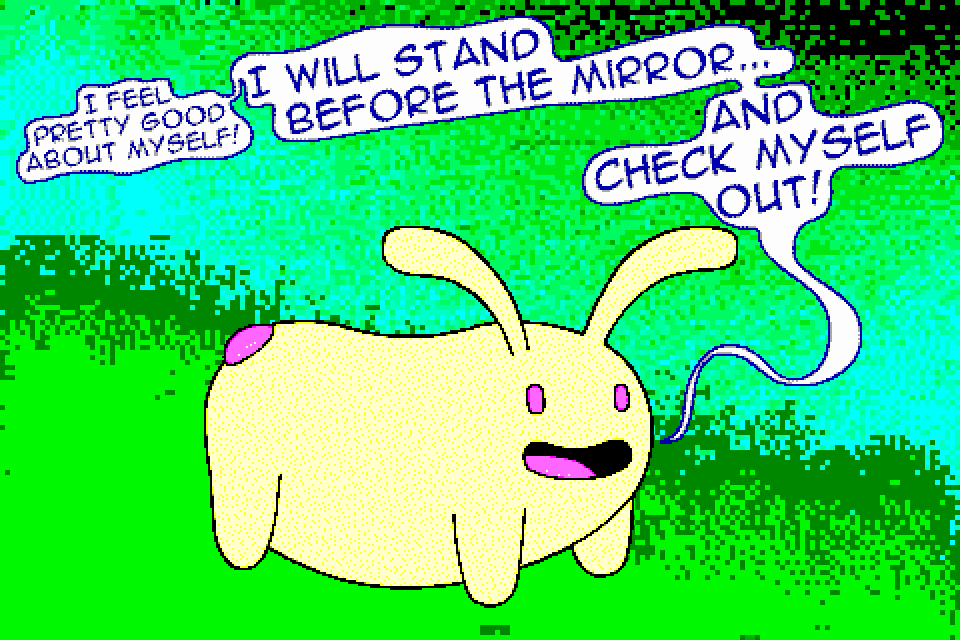 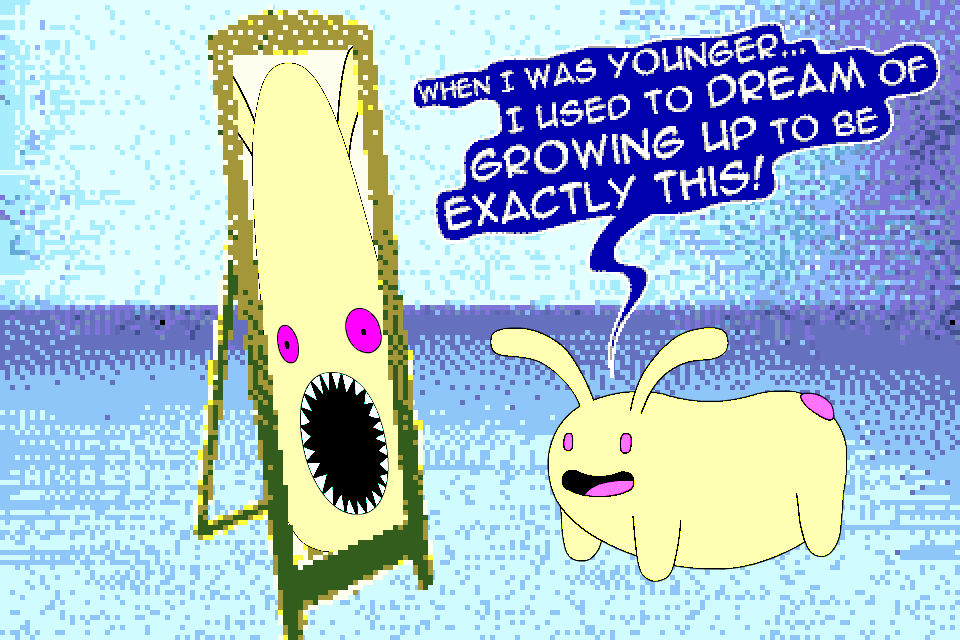 In other news I just released this little project: 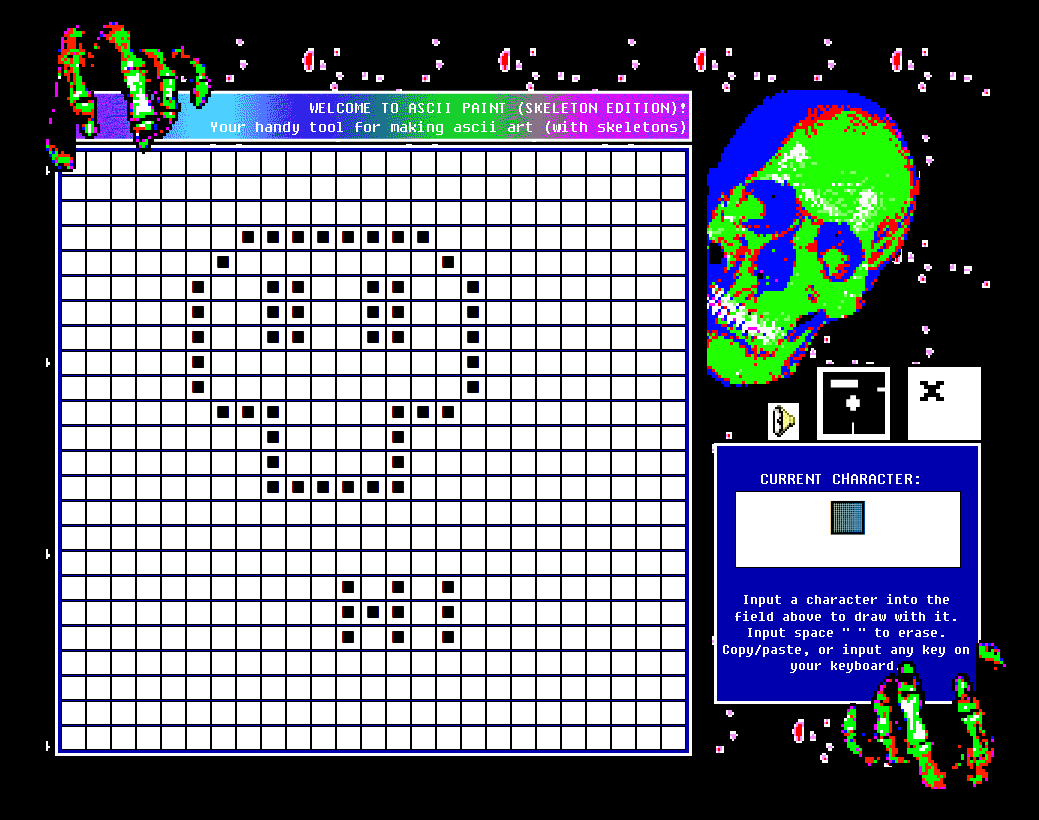 “ASCII PAINT (SKELETON EDITION) is skeletonware that allows you to paint ASCII art by filling in a very accessible ASCII grid. No prior knowledge of ASCII art is needed! Easily chose what characters you would like to “draw” with, and create ASCII art quickly and efficiently. It’s as easy as copy & paste!”

It’s really cute, and I’ve had this post-it-note todo on my monitor for a while, so I’m happy to be able to peel it off and finally fold it into an origami frog. This is what I do with all my post it notes. Behold, my todo’s: 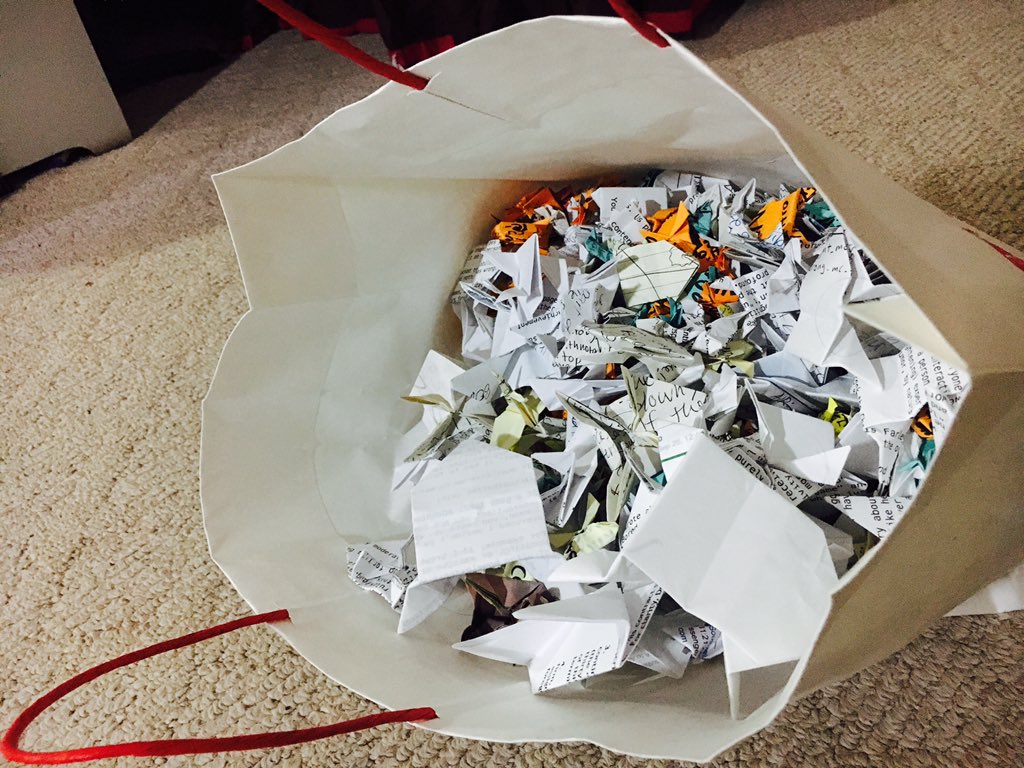 Oh ya! I still have to make another desktop assistant/pet. I’ve promised to make a skeleton one… but I’m super drawn back into the electric love potato direction… Potatoes, again!? We’ll see… Hmm…