Seems like I just fell off the airplane and hit the ground running with crunch. Amazing news is that I’m giving myself < blinktag > one < /blinktag > month to finish this “Desktop version of Tetrageddon Games”. I really need a better name for that, it doesn’t do the project justice. :)
I have a couple more features/areas to put in before I feel like it’s good enough.
I’m very excited about this because… there! I have it! A solid, honest to god deadline…
Although more time would be nice, but that’s a trap I will not fall into!

So GDC was pretty amazing for me. I was able to attend because Anatomically Incorrect Dinosaurs made it into the Mild Rumpus selection. Also, Dinosaurs and FROGGY (It’s Hungry!) where shown at the GameJolt booth.
Totally awesome! 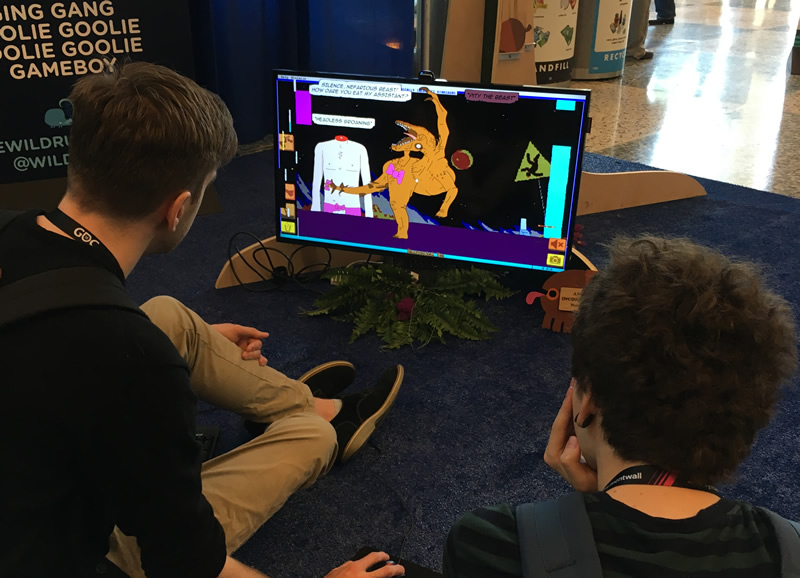 I basically just hung around and talked to people, friends, a cat, etc… That cat was cool. 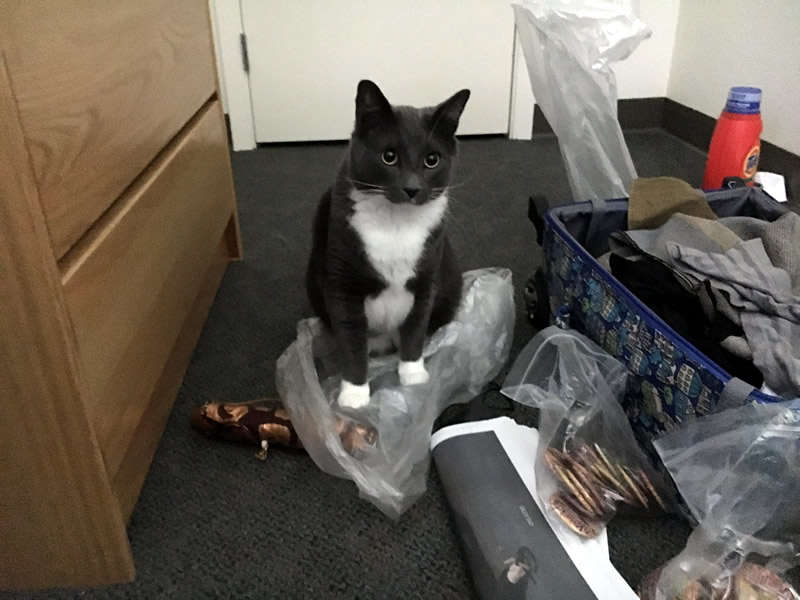 The GameJolt party was my first ever GDC party, so that was a nice one to have as a first. The people are so sweet. It’s pretty amazing to meet them in person and then feel the full impact of how much they really care about “weird games”. The passion is contagious.

The one thing that really stands out, and I feel like it stands out enough I could write an entire post about it, maybe even a book, is that I was FINALLY able to meet Kristin Henry in person.
We had known each-other online for about ten years now. Although I’m probably skimming a few years off the top for the sake of a whole number.

Kristin is everything I wish I where. She is… like… the holy grail of technical achievement. I mean, she could build an operating system. I’m pretty convinced of that.
She is a full-stack engineer and Master of Computer Science (both the term AND degree). She has a BS in anthropology, and thought she would be a forensic scientist. She also has a BS in biology with emphasis in bio chemistry… see I took notes. She’s a total scientist. She used to do radioactive shit!
The list is a long one, and when I came back my inner geek was freaking out for having someone like that as a friend. I mean, she totally liked Anatomically Incorrect Dinosaurs. So now I can put a little sticker thing on it saying “Approved by a REAL Scientist!”
At the end of the evening I felt like I wanted her to be my sister. Although her personality is so outgoing, disarming, and cheerful, that I’m sure anyone would feel like that about her. She’s an amazing person.
You can see her work here: http://kristinhenry.dunked.com/

In a perfect world she would be just as well known as Richard Stallman or John Carmack, and have no trouble finding work.
In that perfect world she could run any programming department, or work at NASA.
At the moment she is struggling to find work… because… well… it’s not a perfect world… and sexism.

The thing about knowing her is that we basically come from the same “web background”. Our experiences of working in tech are pretty much identical. It was amazing to talk about all our stories and laugh our asses off.
We talked about how the “early web conferences” basically had a quota on how many women where allowed to speak, and how men disliked women speakers… so you get the idea.
It was also a great confirmation for me to know that not only my work was stolen by male peers, and then that (stolen) work ended up being very popular. The same happened to her as well.
We where in the same book together too. Exchanging our stories behind our chapters was amazingly heroic. She was giving birth and surviving that, I was so poor I couldn’t afford food and woke up with ice in my hair.
We where also the only two names excluded from the Amazon store listing, when the book mattered. Although you can chock that up to error, but I was often told that no one would take serious technical books written by women.
I make this sound all very depressing but it was so heroic. I would not want to have had it any other way. That’s a lot of ass kicking!

I had always thought it was “just me” and my “bad luck”. I’ve never had a job where I didn’t have to fight for payment in the end. I’ve had to use a male name, and a friend to “pretend to be guy-me” just to get work.
I’ve gotten so used to being looked up and down on my way to the desk, or other instances where my own safety was too much of a concern… Meeting her was a complete confirmation that it’s not just me, and I’m not crazy.
Looking back I feel like we survived something historic. Things have really come a long way, and we are awesome for still being here! In tech!
In all my cases of attending these game conferences I have not encountered any of that. Even if I did I would probably not notice because it would not be at the same volume that I am used to.
If you would have told the “old me” (years ago) that I would be interviewed by male journalists, and that male peers would openly admit that I am talented/technical, or that male peers would be excited about actually collaborating with me on projects, I simply would not have believed it. There was never anything good about me being a “girl”. Now there is. It is happening! :)
I remember the first instance of being at E3 and this guy was totally blown away by my work, and we chatted tech. I talked tech with a guy!
He ended the conversation along the lines of “I would never want to explain anything to someone that did all that…” Like I was actually someone you could learn from, let alone equal.
The experience nearly knocked me off my feet.
So today all this is happening and I feel like I’m a hero for having fought through all that, let alone for still being here.

I pretty much lost count of all the times I’ve wanted suicide because of it. So I spent this weekend in a general state of euphoria because I didn’t “go that far” with my desperations.
I say this because, if you’re in the same boat, somehow it does get better. I’m not sure how it gets better, but it does. Often my solace was to tell myself that “it can’t rain forever”. If you fight through something like that you end up being so happy you did.

Things are changing. Girls, DON’T GIVE UP!
And guys, thank you for listening!

Update as of recent: Kristin got a job! Victory! There is hope! A small degree of order has been restored to the galaxy even! 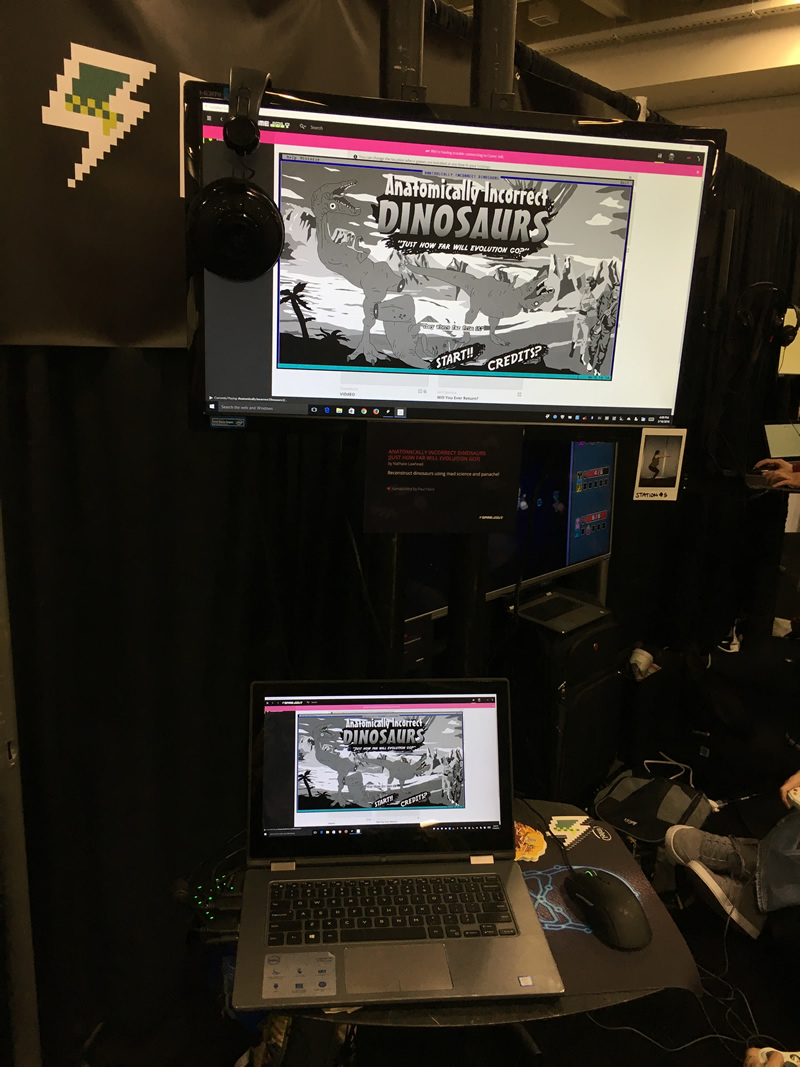