This week I had the amazing opportunity to attend Fantastic Arcade. Two of my games where there this time. It continues to stay my favorite game event. For one, there is more booze there than your liver knows what to do with, and the people are so beautiful.

I loved being able to meet the people behind some of my favorite games… like dog opera (oik os), Proteus, or Off-Peak… even the Kingdom of Loathing folks! As you can expect, I had plenty of “omg play it cool” moments. :)
It’s pretty overwhelming, but I guess I feel like that because games (especially weirder or alternative ones) mean so much to me as an art form. You meet artists you look up to and that ends up being a very inspiring experience.

They asked me earlier this year if I wanted to make a game for one of their cabinets. As usual I said “no”. Mostly because I had just released Armagad (also Tetrageddon Games) and was SUPER burned out.
Later Rachel asked me and I was up for it.
Totally happy I did because I found out that I LOVE making 2 player games.

For those interested, the game is called F2OGGY, and you can get it here.
Oh, pretty cool news too! It made an appearance on Giant Bomb’s Unprofessional Fridays!

Then I was invited to give a talk there.
Of course I said “no”… This time because I was so into the game I was making (F2OGGY) and didn’t want anything to cut into production for that. 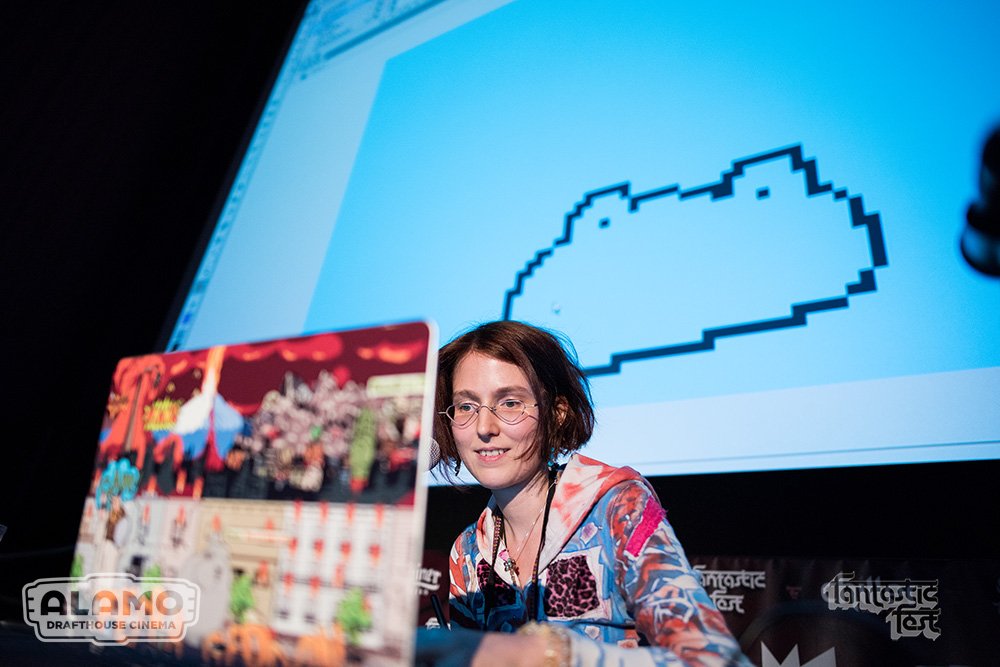 What happens when @alienmelon collaborates with the FA audience to make and ship a Flash game on stage? Pure. Magic. https://t.co/W6ejEakEdJ https://t.co/1CQNwtVPvK

I eventually agreed to do a talk, but had nothing prepared.
Because… you know… talks need slides and interesting things to say… maybe a retrospect… and graphs. Every talk needs at least one graph.

Ok, so I decided I could make a game and have the crowd make suggestions. If anything I could shoot down ideas and be a dictator. That’s ok, it’s my talk. I can be the devil.

Although, on a serious note, I was pretty terrified. I make Flash games (out of love for the technology), and here I was going to make a Flash game in-front of what I assumed are mostly Unity devs, and live program before what I assume are all very competent/great programmers. It’s pretty intimidating. 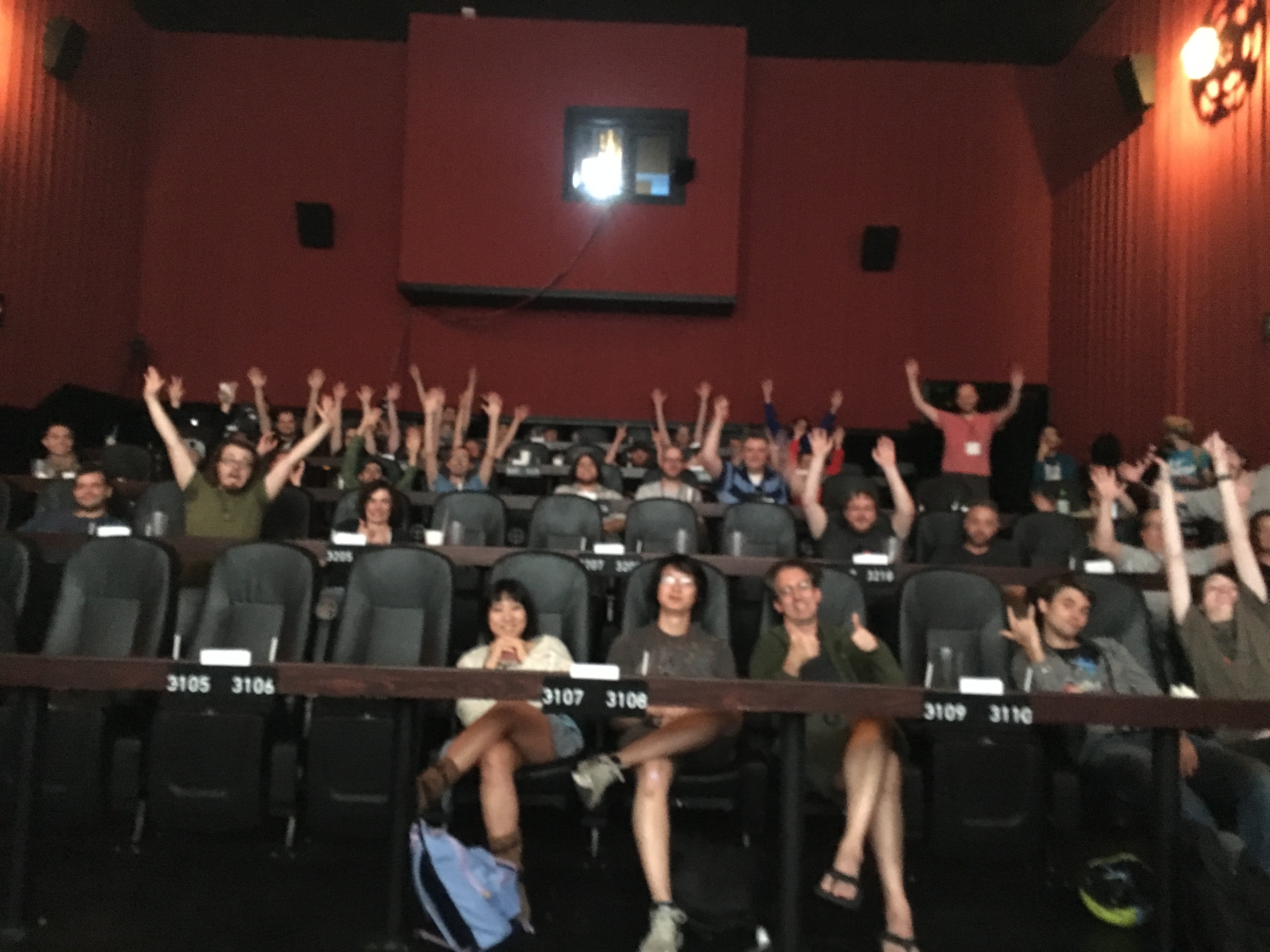 It ended up working out really well! I tried taking all the suggestions, people where laughing, and live-debugging my “quick n’ dirty” programming with me. Plenty of laughing was happening.
The game was based on this Pippin Bar tweet:

I, and the audience, created and shipped a game.

the game @alienmelon made during her Fantastic Arcade session is live & playable right now! https://t.co/XPShDr8JAl

So these shenanigans reached an all time high during the award ceremony. Apparently, during the voting, there where so many write-ins for Blockblockblock that it had to be “taken seriously” (for lack of a better term). It won Runner Up for Audience Award… The audience won an audience award!
Or the audience voted for itself?
Can they do that?

It was pretty hilarious. As soon as the game name was mentioned everyone was chanting “block, block, block”.

Epic shenanigans! I feel proud of what we’ve accomplished.

Although, to be honest, Fantastic Arcade has a lot of epic shenanigans going on…

i think something is weird with my billy bass?? pic.twitter.com/bxxPxCPE3t

If you want to see the talk… erm… I mean live crowd-sourced game-jam, you can view the recording here:

This was a thoroughly thrilling experience.

Oh, and yes! Like all indiedevs, I have a retrospective!

I’m not too sure how all this good stuff ended up happening to me. I wrote that Post GDC Writeup where I described how absolutely euphoric I was about not giving into suicidal depression because of hopelessly abusive experiences, and I feel like that again. It’s so crazy to look back and think there was a point in my life where I thought everything was going to “end here”, or I was just “hate-able”, and the only thing I could ever get was ostracization.
It’s good to be persistent no mater how dark the situation!
A big turning point for me, and how I viewed my experiences was being able to meet the amazing Kristin Henry. We shared our experiences, and it was the first time since I can remember where I just felt human. I guess these things are like being a “frog in hot water”. You don’t notice how bad it is until it’s just… well… bad.
I was given the chance to write a Fireside post about some of this (GameJolt’s “blog”). It was a pretty tremendous personal victory! lol I honestly don’t think I would have been able to share my experiences if it weren’t for meeting Kristin.
Hate, prejudices, or going through abusive situations, is an interesting thing where you feel like you are deserving of it and “weird” for speaking up. I think I’ve come to the point where I see how important it is to speak up, and share your personal experiences (constructively), because there are so many others going through it. Everybody feels alone.
I guess I call sharing this stuff a personal victory, because it shows me how, if I would have given up, I (and my work/story) would never have seen the light of day.
I think a lot about other artists who may have ended up never being known (amazing things lost) because of similar experiences.

Although maybe if things “worked out” for me professionally, and I did end up working at a company, I wouldn’t have decided to go out on my own and end up making all this awesome totally cool award winning art :D

IndieCade is happening close to my birthday, and it’s like the best birthday thing ever.