So here is an update! I was recently invited to give a talk at Screenshake. This is an event in Belgium. They held their first ever Belgium Game Awards, and it was such a privilege to be part of this. The people there are pretty amazing, and fun. I had no idea Belgium had so many talented game creators.
The award show itself was probably the sweetest award show I’ve ever attended. Lots of friends/friendly people, very personable crowd… I loved it. 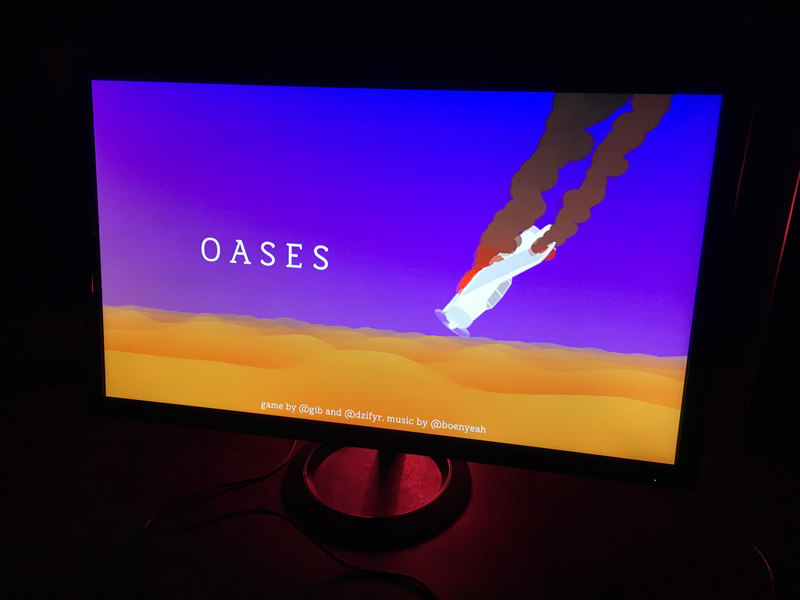 Oasis was one of my favorite games. You should look it up. 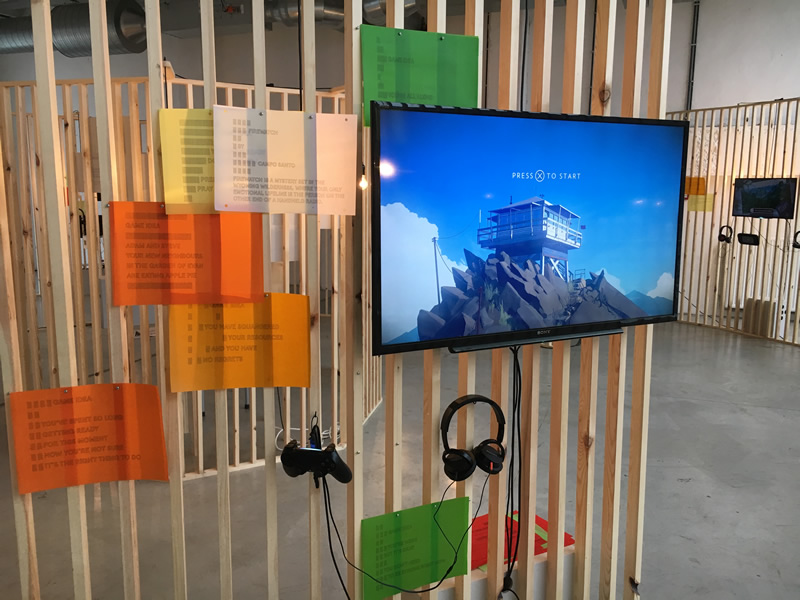 I thought the game exhibition space was presented very interestingly. Sort of like a transparent game maze. 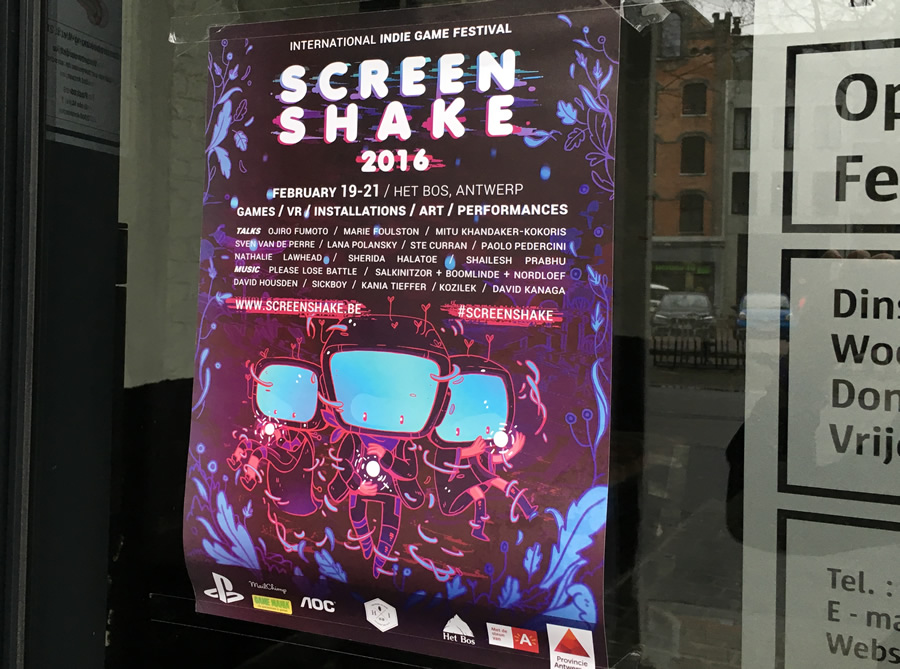 My talk was a morning one (started at 11 AM). I thought no one comes to those, so I was pretty set on having just me and some hung over dude sitting somewhere in the back. Easy. I can do that! 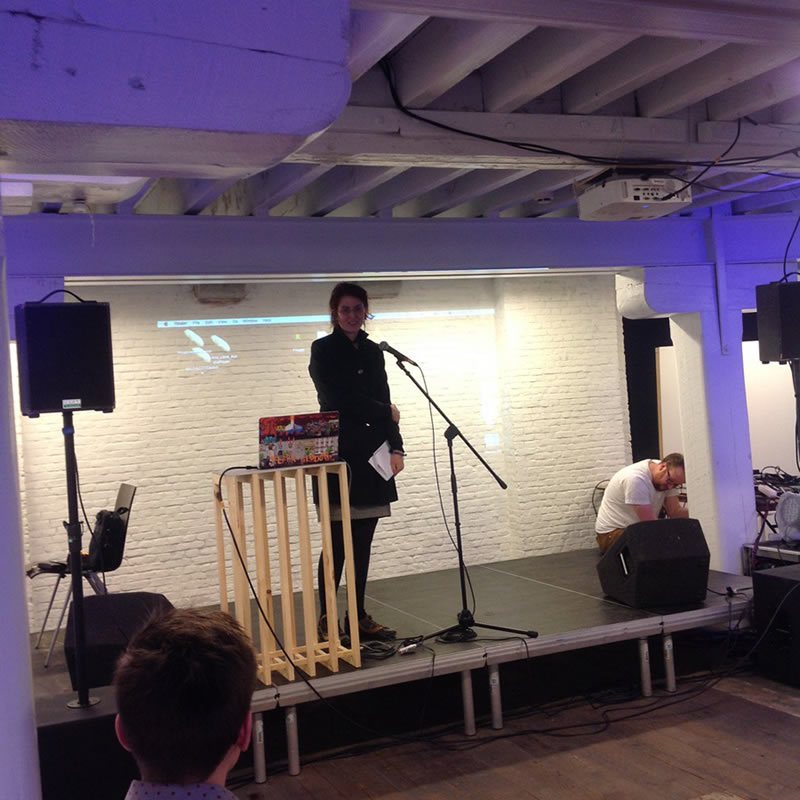 Turns out there where quite a few people in the room.

It was my second talk, so you can imagine I was pretty nervous… Even vomited afterward. No wait! It’s not like that. It was a tactical covert vomit. No one was the wiser… Although I wasn’t feeling well so it probably wasn’t because I was nervous.
I kept hoping I would not vomit on stage. You know that’s a pretty mortifying thought, but on the bright side I could turn that into a performance art piece. Like…

“This is what the internet does to people!”
*vomits*
“This is what I think about the internet!”
*interpretive dance around the vomit*
*done dancing, act solemn*
*people don’t know if they should clap or not. it wasn’t a really good dance*
*one brave soul starts to hesitantly clap. the rest follow*

It’s good to have a back up plan. This was my backup plan.

I think the talk went well. People liked it. Geekster.be mentioned it as “the best speaker (according to Yorick)”. Here: http://www.geekster.be/screenshake-2016/
I also got compliments afterward. It felt good. I’ve never considered public speaking (since I get nervous around people — more of a “behind the scenes person”), but this has changed my mind a lot about it.

At #screenshake Nathalie Lawhead delivered one of my favorite talks of the weekend! @ Felix Pakhuis https://t.co/1e3WgQNwNc

A few people also asked if it was recorded, and will be posted online somewhere. Unfortunately there where technical difficulties so this was one of the two talks that didn’t record.
I re-recorded it and posted it here so those that missed it can see it:

The syncing is thrown off toward the middle/end but I think it’s good enough. The commentary is what matters. 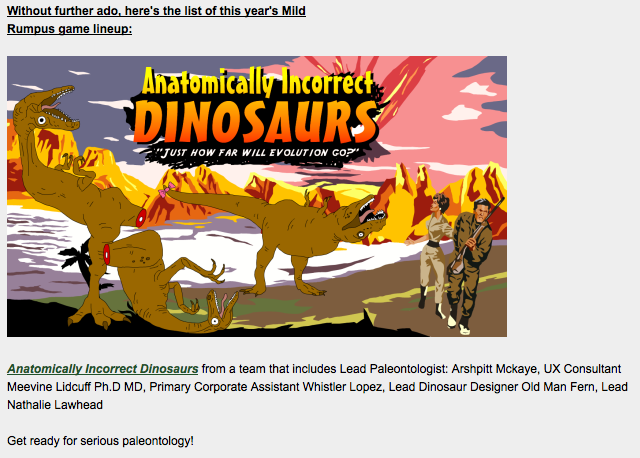 I’ve also gotten the amazing news that my game “Anatomically Incorrect Dinosaurs” will be shown at Mild Rumpus this GDC!
Here’s the announcement on Gamasutra:
Stop by Mild Rumpus at GDC 2016 and play some charming indie games
I make mention of Gamasutra here because I think it’s hilarious that the “bogus cast names” are on this official publication. I’m thinking of doing this for all my games from now on. Like a lengthy silly list of UX Consultants and the like, then my name is there at the bottom like “special thanks to Nathalie”.
Good plan! Great shenanigans.

I’m going to GDC!
If anyone wants to hang out, or meet up message me on Twitter.

A Rant (The Story of a Blanket)

I would be remiss if I didn’t end this with a long rant about flying, and flight security.

Whenever (every-time) I fly outside the US I somehow manage to get pulled over, or get in trouble. You know… the “extended” security treatment.
I don’t know what it is. Do I look frightening? Do I look like someone that will frighten the children? Am I the reason the babies are crying on the flight?

Somehow I always put my foot in my mouth, or say something that triggers that extra note on my passport or ticket.
I have lots of stories too…

Like, one time I was trying to get into Canada (one of the many times, and many instances). I spent all day in the “back room”… you know the one with the other freaky looking ungainly figures such as myself, being cross examined. They decided I was not a fit to enter the country that time, so they had security escort me out, made sure I bought a ticket far away from Canada (to the US), and then the security guy escorted me to the gate (waiting for my flight). He asked me if he had to stay and watch me. I said no. He still hovered around the area, and made sure the flight crew understood that I had to get on that flight. They made sure too.
That was one time.
Other times, what I consider better times, I spend a lot of time in the back rooms with the metal tables and reflective windows… answering questions. I answer one, the guy leaves, and like 20 minutes later comes back and I answer another. You can spend an entire day doing this.

So you get it. Something ALWAYS happens.
This time, trying to leave Belgium, I thought it went so smooth. I actually got INTO the airport with no problem. I honestly thought that I no longer looked frightening to airport staff.
The plot thickens…

The lady at the counter asked me a bunch of standard questions.
What brought me to Belgium? I told her I was speaking at this event.
Where I stayed? I told her at a hostel.
What kind of event? I told her it was a game festival.
“Ah…” not so impressed “Gamers…” and she put a special sticker on my passport. Maybe she translated that as crazy-belgium-drug-sex-party-with-video-games-2016… I don’t know. Probably accurate, but I missed that part of the show.

I didn’t think anything of it until I was pulled aside to be given the extended search by the gate… and then I had to sit in a special quarantined off section of chairs to wait.
I guess this is to give you plenty of time to think about your life, and your actions. Also, I never understood why they want you to turn on your computer and look at it. Are they expecting to be greeted with a giant countdown timer?
I feel like security checks at airports will keep escalating to the point where they give mandatory colonics. You know, just to make sure shit bombs are not a problem. You never know. Passengers are crazy.

So, I don’t know… I must look like a bad ass motherfucker. In fact, I’m probably such a burly and muscular monstrosity that, when the flight attendants ask me what I want to drink, I’ll say “muscle milk.”

I was pretty fed up. As an act of subtle passive aggression I kept the blanket.
It felt good.
I’m pretty certain that they are OK with people keeping the blankets, but I’d like to believe that there is a stewardess out there deeply and sadly missing this blanket. Also, all the flight crew just want it to come home. The airliner has prepared a funeral for it (even if they never found the body). The stewardess can’t help but think it’s still alive, against all odds. It’s out there somewhere, and can’t come home.
I’d also like to think that next time I fly Delta there will be a monument to this blanked at every gate, and I’ll just pass by it feeling nothing…
Although this is not a perfect world, and I’m sure no one cares. Flying is as big of a capitalist business as any, so they probably just put another blanket on the seat, to replace this one. They don’t care. This blanket is in the same boat as I am. We’re bros now. 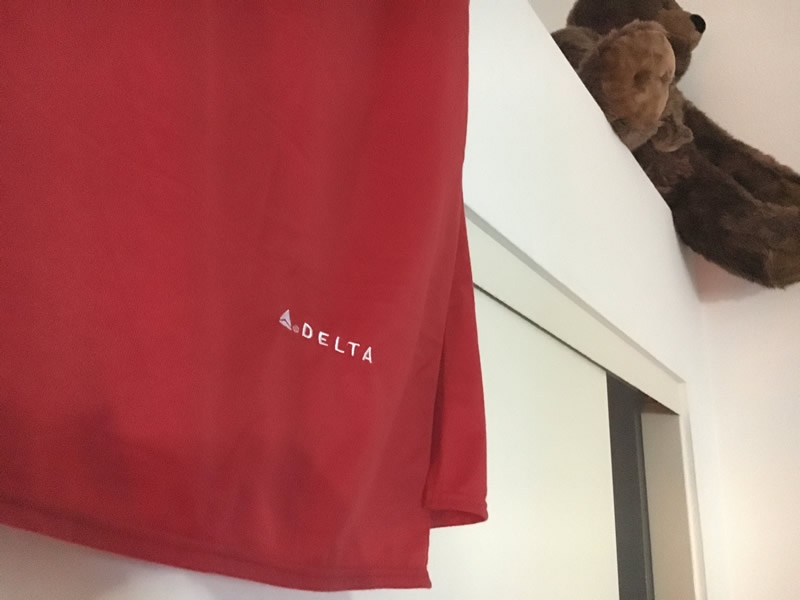