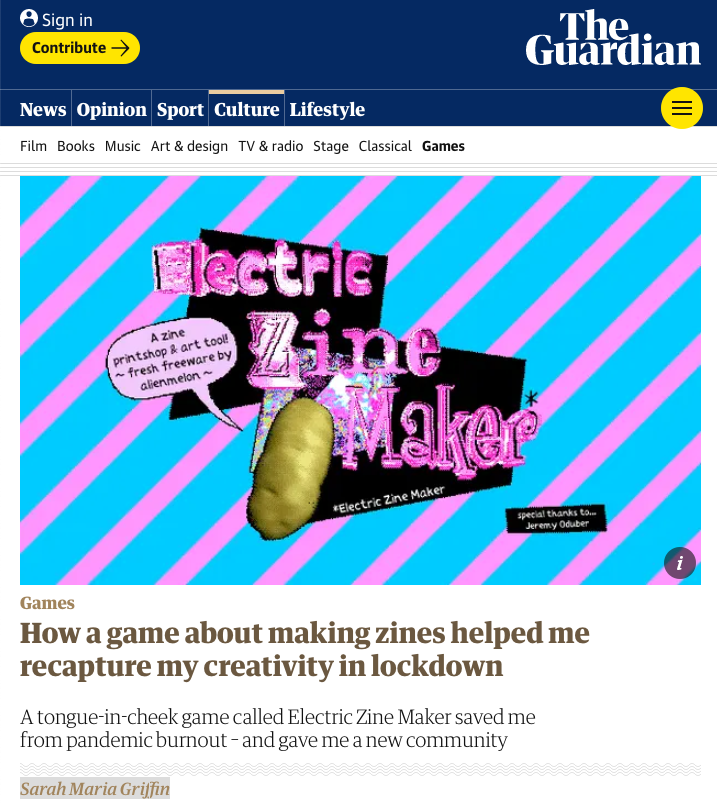 Yesterday, The Guardian published this really beautiful story by Sarah Griffin on how her using the Electric Zine Maker recaptured her creativity during lockdown.
The article is just beautiful. To myself, it’s tremendously encouraging that I made something that helped people… It’s also so much more than that.
It’s kind of like a very touching account of zine culture, and captures why zine culture is so special.

“Last year, I sent almost 2,000 envelopes full of zines to people who wanted to read them. Something else happened, too: people I didn’t know sent zines back to me. Their children made black-out poetry from encyclopaedia descriptions of birds. They wrote about their favorite television shows, or their struggles in lockdown. They folded the pages, stapled them, and put them in the post. These were intimate envelopes: tiny pieces of people’s lives, distributed with intention to a select few. Slowly, zine by zine, my burnout began to heal. It was fun: something I think I had forgotten how to have.”

– How a game about making zines helped me recapture my creativity in lockdown, by Sarah Maria Griffin

It’s tremendous to hear how something you made helped someone else make things, and they reached other people with what they made.

I feel like I’m still new to zine culture. I first seriously dove into it with my game “Everything is going to be OK” which I called an “interactive zine”. It kind of introduced me to how strong of a community zine making is.
Making software for that, has renewed a lot of love for games and software development. The idea of celebrating imperfection, that “rough and quick” is actually great, that people want small and personal art… It’s such a strong thing to bring back to software.
I wrote about that in my last post on what zine culture has taught me about software and games…

“When you go to these zine events the first thing that strikes you is how non-commercial, feminist, queer, anarchist, socialist… it is. All that’s at the forefront. It absolutely is political.
Bellow all that is this underlying spirit of sharing art made for the sake of making art. The message, the politics… is something to be proud of. The imperfections are what make it so desirable.
It reminds me of why I got into making software, or even care about making games.
All art is fundamentally political. It’s impossible to separate art from the artist, or art from the environment it was made under. If you look at zine culture, it’s something you really get a sense of.
I think maybe if we viewed software making, and indie game making, the same way as zines are viewed, it would end up being really beautiful.
There was something grounding about seeing people seek out DIY art that’s as politically charged as it is imperfect.”

– The inspired brilliance of Katelabs, a foray into glitch tools, and what zine culture has taught me about games & software dev…

But what I think is particularly touching about working on the Electric Zine Maker has been hearing how much it helped other people. There REALLY is a need for software that’s silly, rough, weird, cute, different… and it really does help dismantle writers block!
Professional tools are often counterproductive toward creativity (too much pressure), and I think software from smaller devs can be kind of like medicine for that.
I wrote a lot about the world of tools by small devs. There are plenty of correlations between that and zine culture. I think these types of communities can really inspire eachother. It reminded me of why I love doing what I do.

I made the Electric Zine Maker in hopes that it would serve as an introductory tool into the world of zine making. Like you tinker with it, and eventually you start finding your own voice and ways of making zines… like a stepping stone.
It’s started to grow into more tho. People are seriously spending time with it.
It feels like a responsibility.

I have gotten a lot of good feedback about the UI design. How using it has been like, and aspects of it that don’t really serve the vision. For example, someone said that it can be overwhelming and the “information overload” can be hard to work in, so it’s kind of counterproductive for what the tool is supposed to be. Electric Zine Maker should be disarming and easy… I think I’m going to prioritize the UI redesign now. It seems like the responsible thing to do at this point. 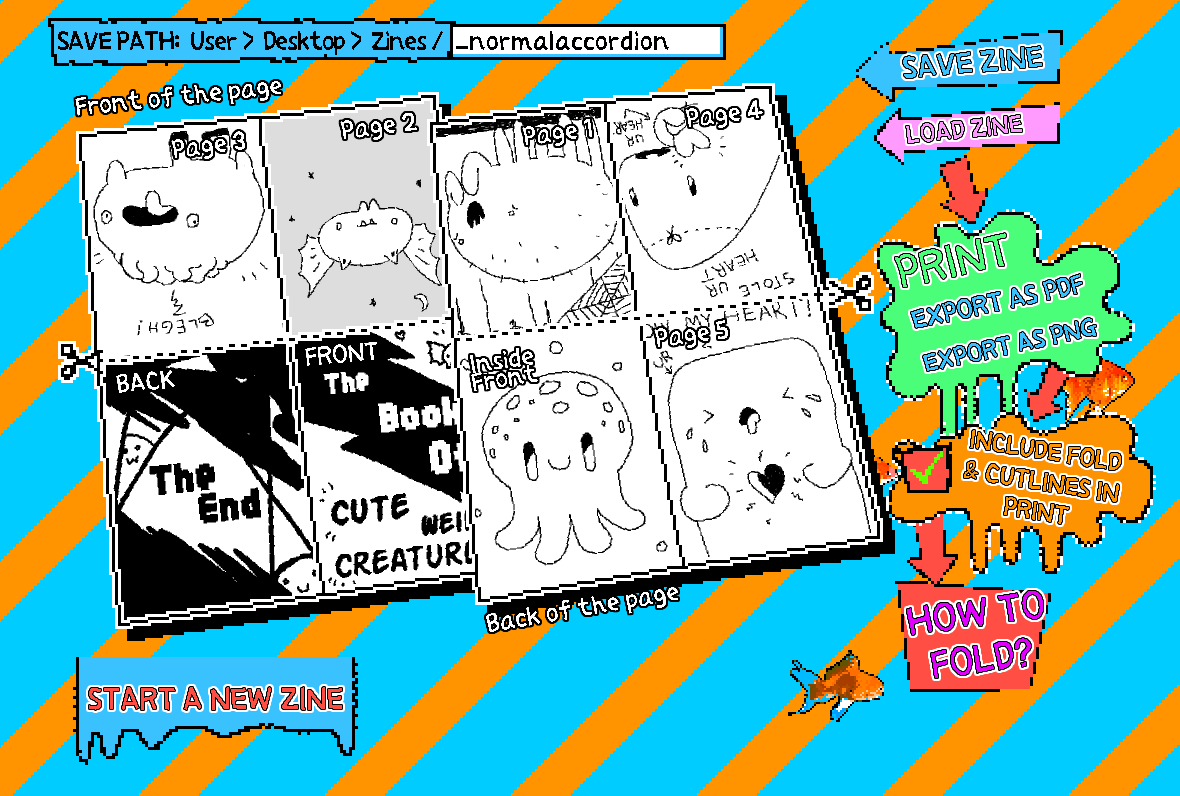 UI and UX design is a misunderstood field that I think has been very “invaded” by language and use-cases from larger corporations. I think it helps to look at experimental work as separate from that, and try to invent your own UI and UX language that will fit within that more experimental creative direction. I absolutely refuse to accept that UI and UX work has to be boring or monotone. There’s room for things that are unique and different. I’d like to find that space for the Electric Zine Maker.

The program grew a lot. Initially it was going to be just a black and white drawing tool with very basic image and text capabilities. At that time the UI made sense. For what it lacked in features the UI made up for by being loud and exciting.
I want to keep the playful, silly, exciting aspect, but re-approach it so it fits with how much it grew. It should definitely be accessible to more people.

For this, I’m going to study physical toy design. I think “toy” is a concept that should be built on. Creativity is play. It would be amazing if the UI reinforces that much more elegantly than it currently does.
Yes, the itch page will get a redesign too. I’m going to make it look more like the official website.

So that’s the future direction of it. I’m going to redesign the UI going forward!

I just released an update for it the other day that adds a bunch of new templates.
These include Accordion zines, quarter zines (comics), and fancy zines that are more interactive.
I go over all that in the devlog here…

“I find all this exciting because it feels like beautiful ways of making literature AND toys with paper. I’d like the Electric Zine Maker to offer more of that. I think it will make it much more special.”

I’ll be adding many more templates and treat the template system with the same care that I gave to adding all the wacky tools.
I think it would be beautiful if you can make really cute and strange toy-like things with it too. There’s a lot of cute stuff you can do with a single sheet of paper that lends itself to literature and story telling. Electric Zine Maker should definitely open the doors to that for people (much more than it does already).

I’m writing this coming down from a bunch of troubleshooting and bug testing. Lol I stayed up all night trying to figure out why it’s breaking in weird ways for a small handful of people. There’s a pretty critical bug that affects a tiny percentage of Windows users which prevents saving (I have no real idea why yet), and one person on macOS reported the drawing tool disappearing entirely. I’m not able to recreate any of these on any of my systems (or friend’s systems)… so yeah. Before all the fancy UI stuff is going to get done, I’m releasing an update that’s going to address these weird bugs… I hope.

Since the Electric Zine Maker has gotten a lot more support, like a grant and a residency, I’m able to do more for it. Working on it feels less like a battle to “hold in there”, so I’m excited to say that re-inventing the UI is a possibility now!
I’m getting a new Windows laptop too, and I’ll finally be able to dual boot Linux! Maybe I can try experimenting with a Linux version too. :D

I’m going to be doing a little work on my blog too. This blog was started in 2004. At first it syndicated writing, then I used it to post stupid memes, and eventually it got hacked a bunch of times. None (not much, if any) of it is deleted, so you could probably still find that stuff if you dig hard enough.
As a result of getting hacked much of my writing was vandalized (pre-2012). Like the poetry, recipes, a book that ended up in one of my games but I never properly vetted… I didn’t ever take the time to properly clean all that up.
It’s been kind of bugging me lately since my writing is starting to matter more to people.
Lol one of the times I got hacked (not a personal attack, just a dumb exploit) this site got plastered with Viagra ads. That was one instance that I actually thought really funny. xD
I guess it goes to show that you should just not buy Viagra over the internet, ever, even if it’s from people you think you can trust. They might have gotten hacked. Please don’t ever buy Viagra from me. Ok? Ok!
In general I’m going to put aside some time to clean up all my writing. 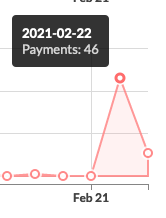 If you haven’t read it yet, here’s some good writing I put out recently…

The inspired brilliance of Katelabs, a foray into glitch tools, and what zine culture has taught me about games & software dev…