Last night in the AM’s Monkey Fortunetell was finally published to Google Play. The game is FREE.

As a side note, I only tested this on my Nexus, and now received some feedback that it’s laggy on some devices so updates will be on their way soon. 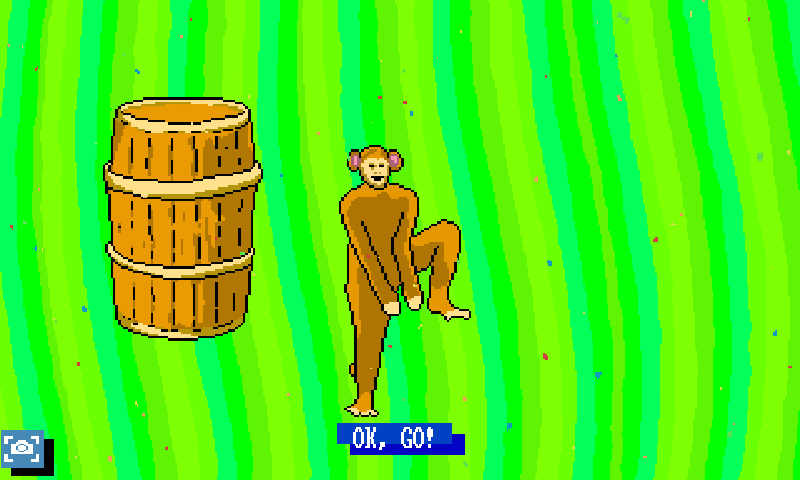 If you follow me on Twitter then you’re probably aware that the game had a fairly puzzling setback. I published it the night before (also in the AM’s) and it immediately received a suspension notice for violation of the Impersonation or Deceptive Behavior provision of the Content Policy.

“Impersonation or Deceptive Behavior: Don’t pretend to be someone else, and don’t represent that your app is authorized by or produced by another company or organization if that is not the case. Products or the ads they contain also must not mimic functionality or warnings from the operating system or other apps. Products must not contain false or misleading information in any content, title, icon, description, or screenshots. Developers must not divert users or provide links to any other site that mimics or passes itself off as another app or service. Apps must not have names or icons that appear confusingly similar to existing products, or to apps supplied with the device (such as Camera, Gallery or Messaging).”

Interesting… Google’s approval and checking process is automatic (from what I know). It’s a system, and (unlike Apple) not human. The difference between the two amuses me. Google is a machine bureaucracy. Apple is lawyer bureaucracy. They make a wonderful couple. I often wonder what children they would have. This would also make awesome inspiration for some post-apocalyptic dystopian game, but I digress…

I really have no idea why the game triggered this. I assume a number of reasons.
For example the description…

But the identical thing (down to the dot) is on the App Store, and Apple didn’t bat an eye.
Interestingly enough Monkey Fortunetell was not rejected once! This surprised me, because the game has a number of things that could warrant a rejection. Like “exhibit bugs”, or “simulated errors” which means I thought the glitch art would certainly warrant at least one rejection. I got a lot of hassle for Haxed By Megahurtz having a blue screen of death level (that got the game rejected once, among the many times it got rejected).
The App Store is very inconsistent. I’ve gotten some approval-process-reviews that where very hard-core in laying down the law on me, and others I had no issues with (like in Monkey Fortunetell’s case).

So it surprised me when Google Play reared its version of rejection upon me.
Like I said, I assumed it was the silly app description that must have conflicted with some scenario (or however Google Skynet AI works).

But I do silly descriptions and funny “What’s New” there all the time.
For example, for the change logs I’ve gotten into the habit of imitating star-ship engineering:

It’s behavior I can’t part with. I mean, what’s the development world come to if you can’t LARP Star Trek at work. Even if it’s “Deceptive Behavior”.

But perhaps I look at this too lightly. Perhaps it is a perfect illustration that robots, AI, The Google, do not understand humor. Perhaps *cue epic music* I am witnessing the beginnings of a future where humor is the only thing that sets us apart, and actually SAVES us. A future where humor will become a code language that humans use to fly under the radar of the watchful robot overlords as humanity fights to regain its freedom. *end epic music*

So I went through the appeals process. It turned out to be nothing at all!

The appeals process involves uploading a document proving that I am the author (did not steal it).
Basically (I assumed again) they needed proof that I am not a robot spam overload there to pollute their good store with rip-off games.
I wrote a note stating my name, giving a link to the game on the App Store, and providing links to articles like Kill Screen, and Rock Paper Shotgun where I am mentioned in association with the game. It was a shot in the dark, but it was (apparently) exactly what they needed.
Then I was asked to provide an argument of why my account should be re-instated. I said I was a net artist and game developer, gave links to articles where my work was featured, proving that my work is good (the assumption was that they wanted proof as to me being a serious human developer), and kindly asking them to ask me if they need anything else, then ending it by thanking them for their time.
Very polite.

That’s right! Google is still more human than machine, and the humans came to my rescue.
If that doesn’t melt your heart you must be machine.

Solo mobile dev is a very challenging thing not because of the development part, but simply because of circumventing all the errors, revocations, certificates, appeals, approvals, updates, and the financial investment is quite steep when you factor everything in.
After that you have to deal with users and their review scores, and keeping a very easy to anger audience happy (one that also expects hard work to be free).
The App Store is over a hundred dollars a year (after taxes) and just succeeding enough there so it pays for itself (just the App Store fee) is rocket science at best. You have to be there full time, promoting, and using all sorts of tricks (which I won’t get into now) to make it just work.
It’s not a place that’s very welcoming to indies (by that I mean smaller, or one person teams). I realize I should, and could, put more effort into it (if I wanted it to succeed), but spread out between all the other aspects of development one of me is not enough.

For now my games are fun extensions of the desktop version. People ask if I have stuff on mobile, and are delighted to hear ‘yes’. At the moment that’s enough for me, and I’ll support it for as long as I can.

Tetrageddon & Steam: I’d love to get my games on Steam (I’ve started seriously considering this), but I need to wait a bit before investing the $100 (last I checked) to start the green-light process. Have to take it easy on the finances. :)

Tetrageddon & PlayStation: I am hell-bent on getting Tetrageddon on PlayStation. Need to resubmit to them too. Much work to follow up. Finding time to do that. Eyes falling out of head. Need intravenous supply of coffee. Send help!

All this dealing-with-other-companies stuff is a ton of work for just one person (aside from actual development).

The Reality of Things As They Are:

Some interesting notes and numbers after doing my taxes.

Over the couple years that my games where on the App Store 4.34K where downloaded. Wait, don’t criticize yet…
I consider this good because this is all natural growth. I did ZERO advertising, marketing, or anything on that front. This is just out of daily downloads starting as a nobody. Dare you (as a solo-dev, not company, to do better ;) ) But…

That is a great example of the user base that is mobile. People want free, good, but not for pay.
Also, to silence criticism here, I am a solo dev. I have no company that I can hide behind, or team to distribute the workload to.
I program the game, make the sounds, artwork, music, press release, PR, pay for software and the stores, everything for the thing. After managing to get through approval processes (like the above), I then need to maintain the game. This is a huge workload.
The reality of this picture is that unless you win the mobile lottery (like Flappy Bird to name one example) it is not a feasible place to seek income.

On a personal note, my tenacity is a force to be reckoned with. I will make a living at this!

Now back to my new game! :D