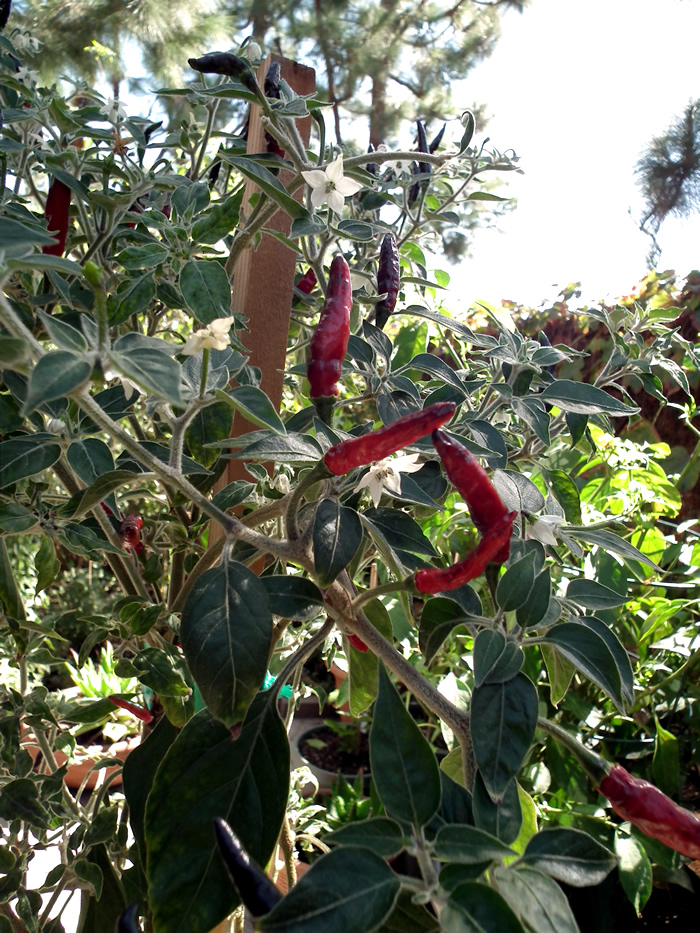 I love hot peppers, and am cultivating a growing population of 9+ plants. I find that there’s something very special and beautiful about them. Aside from just admiring them, I also love to eat their fruit! Pickled peppers are a lot like wine. Each one of them yields a unique and deep flavor. The longer they pickle the more sophisticated the flavor becomes. 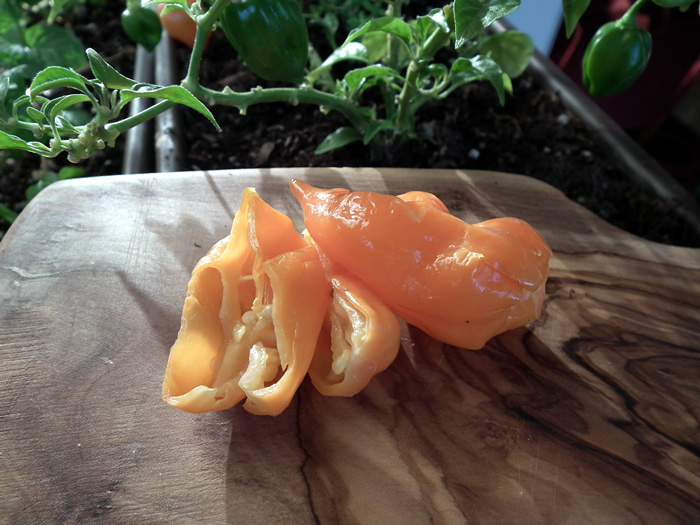 -A Habanero fermented for three weeks

Hot peppers have the highest concentration of Vitamin C of any food popularly consumed. They contain 357% more than an orange. With winter setting in it seems like a good thing to eat, as well as keep you warm. Not that that means anything here in California, but I’m told that inhabitants of hot climates will regularly eat cayenne since it lowers the body’s internal temperature. Cayenne is the most popular pepper, this site has some very fascinating details about it, but all hot peppers high in capsaicin have such benefits. 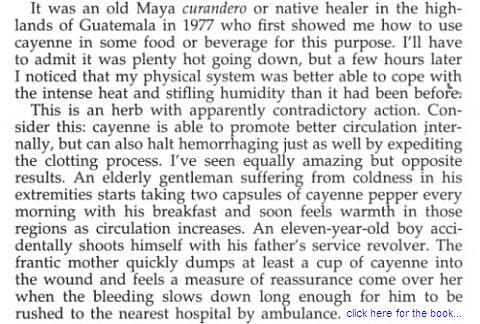 In this recipe I’m going to use jalapeños (which are not hot but are used to give the hot sauce that Tabasco hot sauce flavor) and habaneros which are reportedly hot, but only mildly hot for me since I’ve been regularly consuming them, and have gotten used to them.
I get them from the local farmers markets, which are the best source for unique pepper varieties.
The mom of the family that grows and sells them eats them like candy. She can’t remember the last time she’s been sick. She credited this to her habanero consumption. The peppers from them are fresh picked, organically grown, some are as long as two inches, are very crisp, and… potent.
If you’re in the Irvine area and looking for good hot peppers I recommend them.
They are always at the Saturday morning farmers market in Irvine. Look for a Mexican family, second stand to the left next to oranges. The first row close to the mall center/stores. They sell primarily vegetables, melons, and lots of strawberries pretty much all the time. 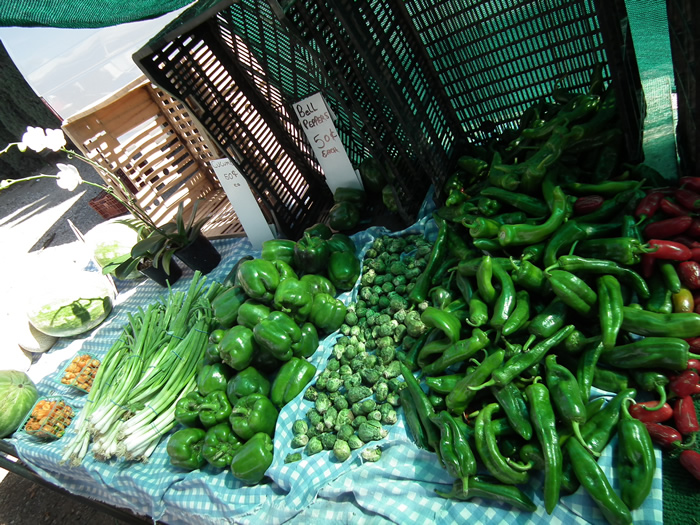 *Fresh Jalapeños (They really do add a nice aroma, try them alone if you want a non-hot version.)

*Fresh Habaneros (You can use any other fresh hot pepper.) 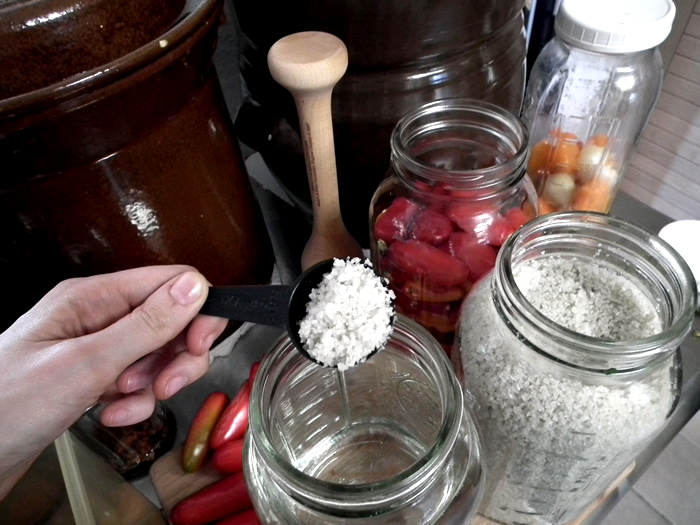 *An optional starter to kick off the fermentation (The water of other raw lactofermented vegetables, but just brine is enough.)

*Fermentation weight (To place over the ingredients in the jar when you’re done. This keeps everything below the water to prevent kahm yeast from growing.)

As a side note on Kahm Yeast:
If you spot any white yeast growing on the surface, don’t worry. Yeasts play an important roll during lactofermentation. That yeast is called Kahm yeast, it looks white, velvety, and powdery. It is a harmless aerobic organism. Although harmless, Kahm yeast is something you DON’T want to let overgrow since it affects the flavor of what you are fermenting. Kahm yeast is typically caused by under salting, or exposure to air. If you keep your jars clean, add enough salt so the brew is sufficiently acid (primarily when it’s started), and the jars used are air tight then it won’t happen.
If you see it scoop it off the surface and add more brine (salt water made with a stronger solution of sea salt this time).
Kahm yeast is often cultivated for a yeast starter… as in cultivating it for beer, ale, or bread (if you add some sugar water the yeast will grow and you would have your own house yeast starter).

*Mixing bowl, knife, or (in the case of Recipe #2 a food processor and mixing bowl.

*And Optional medical exam gloves… If you’ll be pounding down the vegetables with your bare hands… they will most likely burn if you’re not used to handling hot chiles. 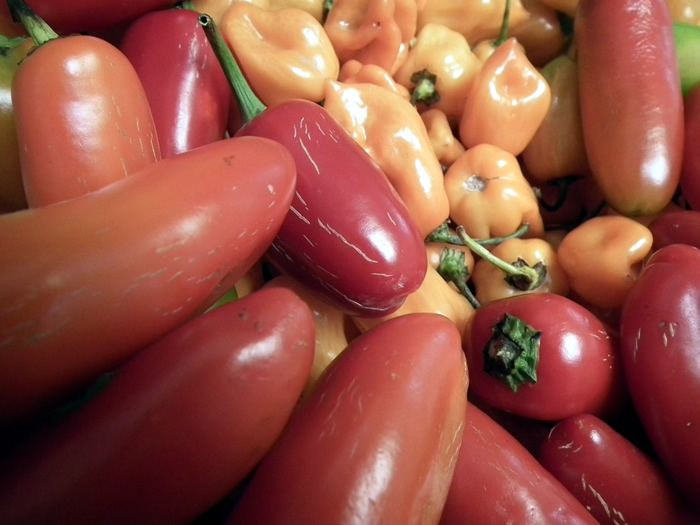 *Cut Chiles (just make sure the skin is pierced so water enters them)
*Layer them tight in your jar
*Routinely pound, press, and lovingly squash them down 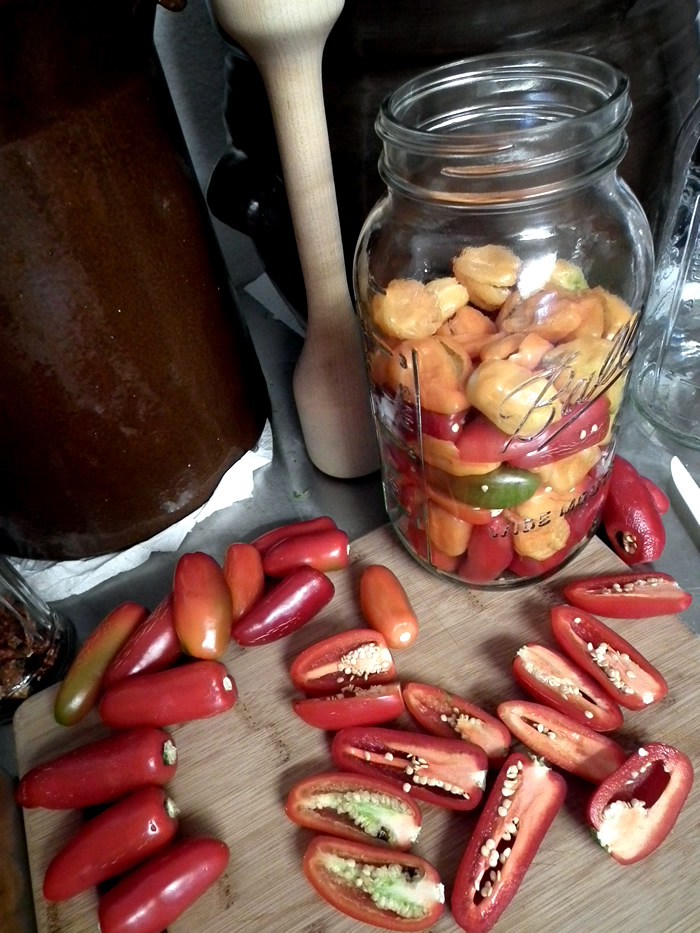 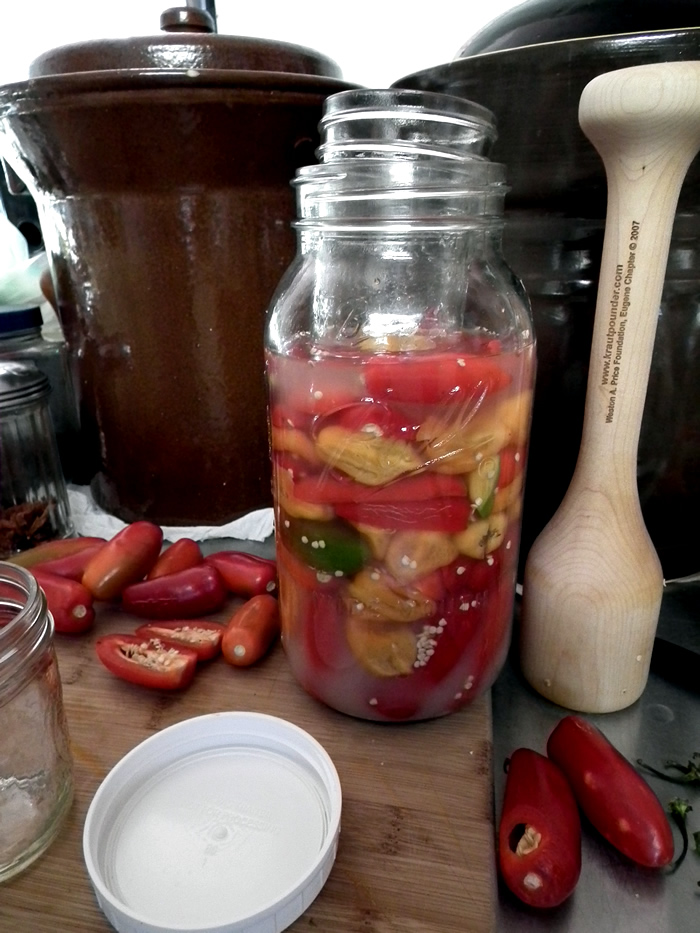 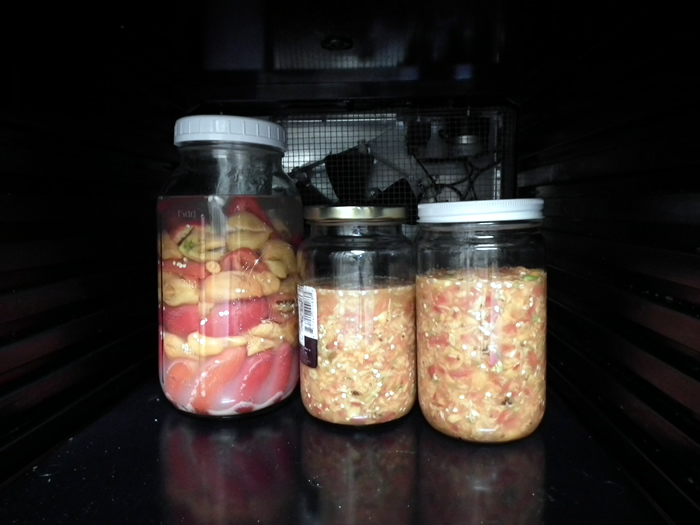 *Let it stand for 2+ weeks. The longer the better!
Don’t open the jar, it needs to stay sealed during fermentation.
*But peek in regularly to monitor their progress.

When it’s finished blend it up and enjoy as your very own world-famous hot sauce! …Or try slicing the peppers up and add them to any food, like nori rolls. The water in itself is hot enough to drizzle on things as a fun spice. It’s a great condiment that can go a long way. 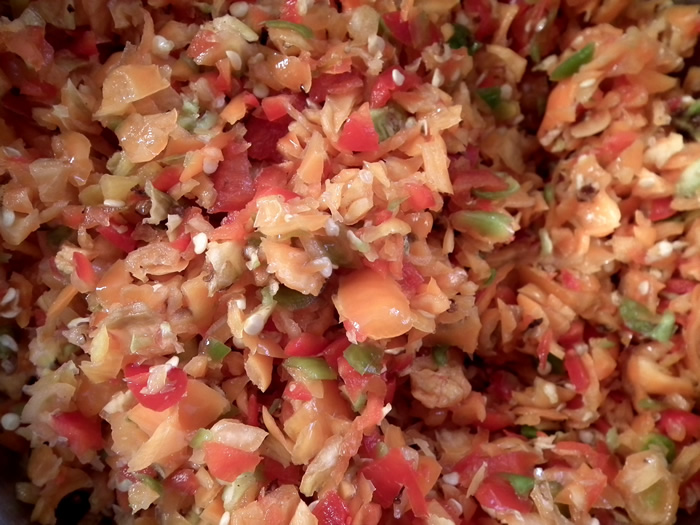 In a food processor…

*Grind up the hot peppers

In a mixing bowl…

*Mix hot peppers with the brine and optional starter
*Place the mix in jars making sure they both have an equal amount of brine.
Brine should be at an equal level or just above the pepper mix. 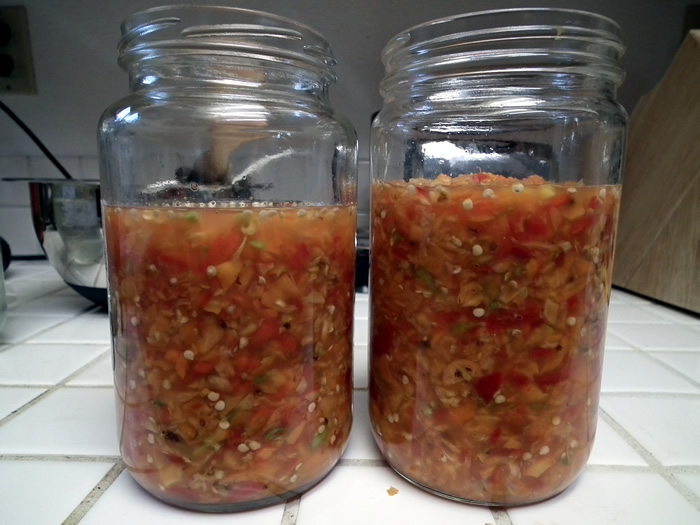 *Seal containers and place in a dark place to ferment

*Let it stand for 5+ days. In this case you can eat it much sooner than the other recipe because the peppers are diced.
*Check regularly to view their progress, but don’t open the jar, it needs to stay sealed during fermentation.
*Water separation is normal… When it’s done, just mix before you eat.
Although this version is much faster it is also more susceptible to the notorious white yeast. This is because a lot of the vegetables are floating on the surface. If this happens just scoop it, and the affected vegetables off, and refrigerate.

There you have it. Two versions of a hot monster.
Try these recipes with different chile varieties, throw in garlic for another nice flavor, or herbs like rosemary…
In the case of Recipe #2 you can dice the chiles up with Salsa ingredients and lactoferment your own super hot Salsa… or a seriously wicked spicy Ajvar. 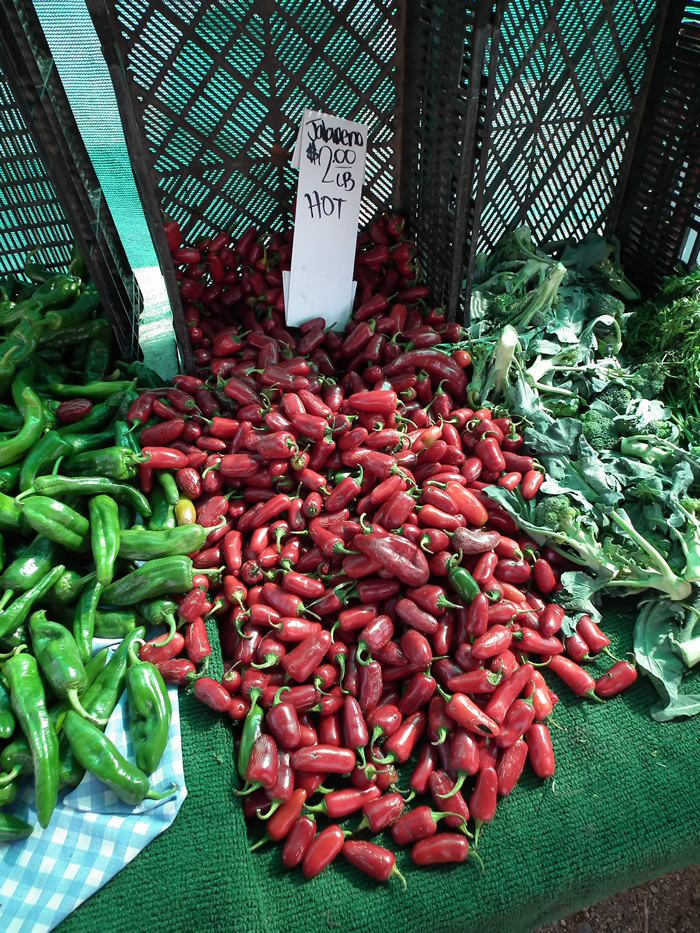