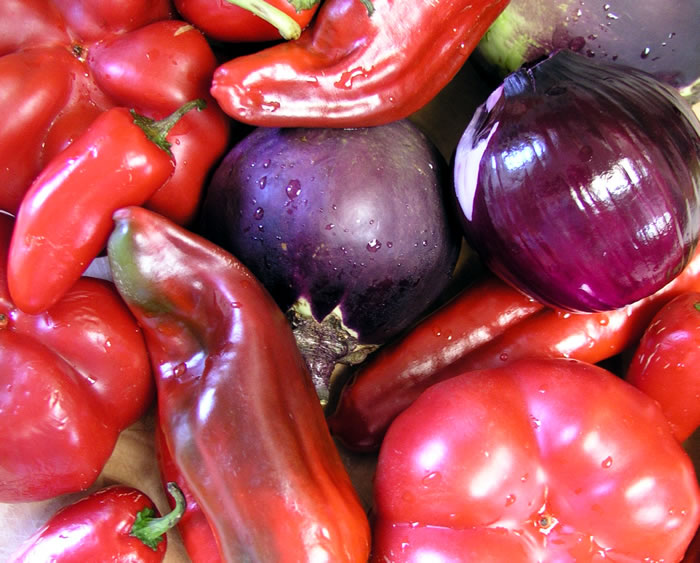 For more on lactofermenting see the last paragraph here.

Ajvar, if you’re straining to pronounce that, could also be referred to as Serbian salsa. It’s a tasty mush traditionally made with red bell peppers. Other regions of planet Balkan will include eggplant, garlic, chili, and sometimes onion.
A friend of mine, who is also into this cheeky raw foodery, grew up on this preserve. Having fond memories of it he asked if it was possible to lactoferment a raw Ajvar.
The idea was intriguing… considering that to ask someone from that region to live without Ajvar would be the equivalent of asking men to live without sex.
Sounds like cruelty, something had to be done! 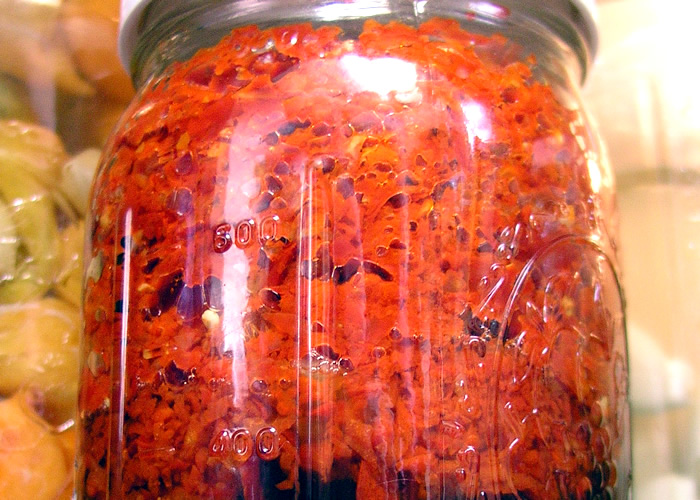 *1-2 cups of a pro-biotic starter mixed with 1 spoonful of a mineral rich sea salt (such as celtic sea salt, or himalayan pink sea salt).
This would be the juice of any lactofermented food such as, sauerkraut juice, kimchi juice. The addition of salt will help prevent the growth of yeasts that may appear on the surface of the fermenting vegetables…
If you don’t have any then make a
Optional Miso Starter:
Just blend *1-2 cups water, with *1 teaspoon mineral rich sea salt like celtic or himalayan pink sea salt, with *1 generously heaped tablespoon miso. It has to be a good organic miso, like Miso Master Organic: 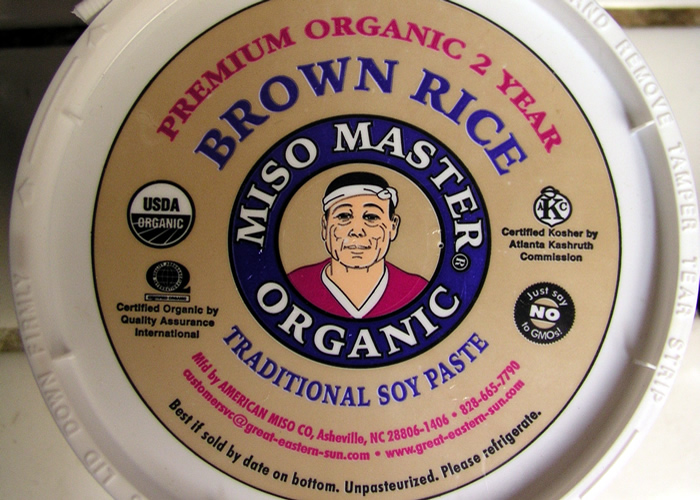 *A Food Processor, or the superpower to chop vegetables super fine.

*An air tight glass containers
This must be airtight and clean lest you will find a harmless white yeast growing at the top of the Ajvar when it’s done. If this happens, don’t worry. The yeast is harmless. It’s normally just scooped off the top and discarded. The rest is edible.

*In the processor chop the vegetables to the desired consistency.

*Put the vegetables in a bowl. 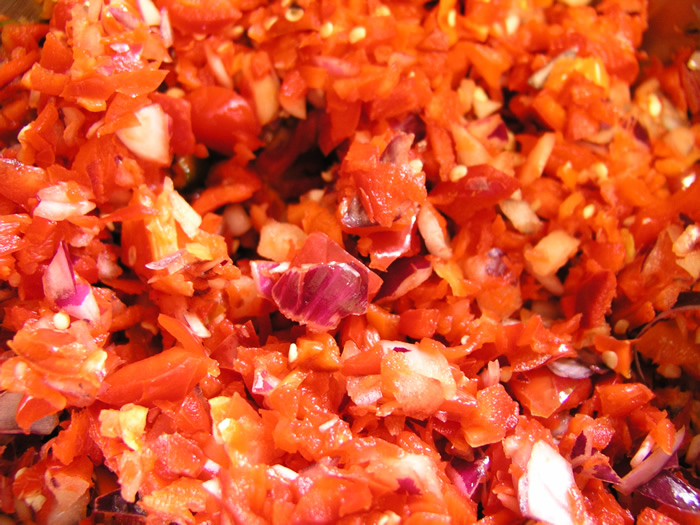 *Add the starter to the vegetables and mix thoroughly.

*Put the resulting concoction into the glass containers.
Be careful not to overfill. The water quantity in them will often increase and they may overflow. Leave enough space at the top in case that happens. 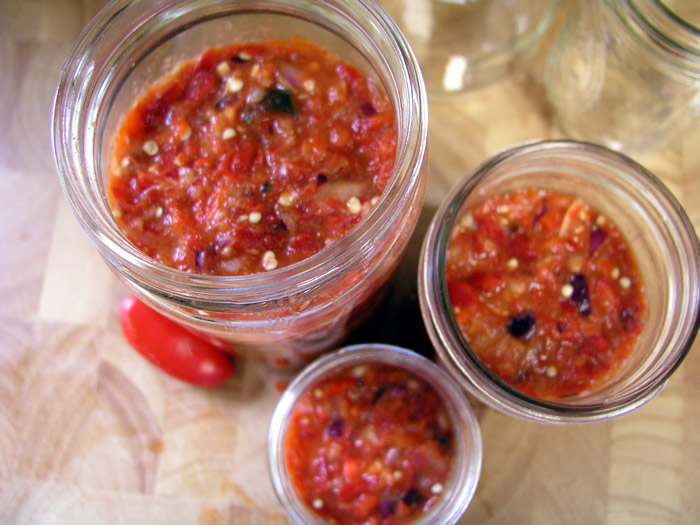 *Put jars in a warm dark place, and give them your blessing.
You may want to put something beneath the jars just in-case the water in them decides to squeeze out. 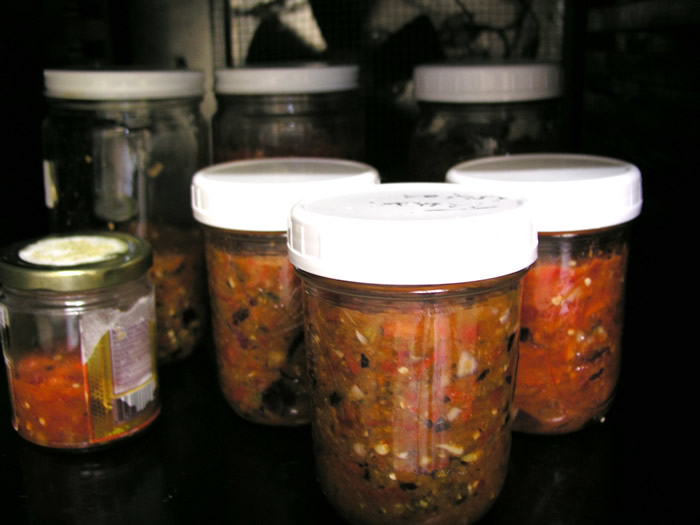 *Let sit 4-7 days.
About a week, as you let the lactic acids have their way with it.
Make sure you regularly check the containers.
Do not open them until a week!
If you notice some white yeast growing at the surface of them, just scoop it off and discard. The rest of it is edible.
At that point refrigerate it… or eat it.

A finished Ajvar will look like the above image, which has been sitting for slightly more than a week. Such lactofermented vegetable mixes can often sit out for longer. They will taste even better (being more rich in probiotics) than ones left to ferment for short periods of time. 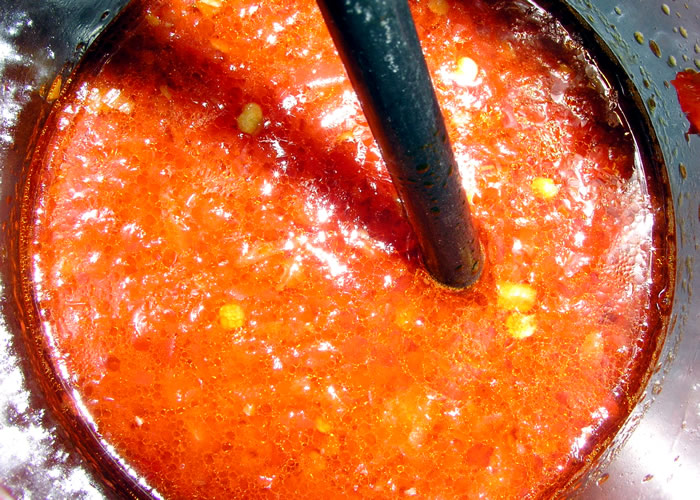 “If you’ve changed yourself, you’ve already changed the world.”