Since it feels really important to me to make an effort to explain the internet portion that surrounds the desktop version of Tetrageddon Games, I’m doing that here. I never talked about that properly.

This came about because of this. Since I know how these things play out, if I were ever to build on this, or make something surrounding the subject that I have been working with for 10+ years… I’ll likely be compared to, or told that I’m copying the ideas from the new hit game made by men (I apologize for the sarcasm maybe).

Tetrageddon, and especially the desktop version of it re-named ARMAGAD (also Tetrageddon Games), is a love letter to the internet of old.
That’s the pitch that I’ve been using for years.
It’s a fever dream. Like you fell asleep and are in a pleasant, wild, nightmare of what the web used to be filled with psychedelia, strange games, and lots of things to explore (again, I have been describing it this way for years).
The games are silly, funny, loud, obnoxious at times. The desktop version (ARMAGAD) is the one with all the work and the one I consider the best.

Tetrageddon is quite a few years old now. When I started working on the desktop version of it I planed to have a webring that was “hidden” behind the games. Sort of like there is a vast internet that surrounds the space. You can find it and fall down that hole.
I talk about the “hidden internet” in this old development post.

Here is one of the posts where I talk about the art style and why I work with the “low-fi” look.

At any rate… to gain access to the internet that is in Tetraggeddon you click on the FROGGY game in the main menu.
When you get to the FROGGY game there is a green pipe in the corner of the screen.

The first time you click on it, it tells you that you need coins to play for access. You can collect the coins in the main menu. They rain down at random times when you access the menu. So sometimes you have to keep going to a game and back to the menu until you trigger them. It’s built to be obscure.
Once you pay, you are taken down the pipe. There’s a wild animation that plays (you are going into “nightmare internet mode”)…

The first site you encounter (pictured bellow) is called Tuttle’s Lair.
Tuttle is a very angry teen. He spends his time online writing, and complaining about the popular websites.

If you want to explore the next site in the webring you scroll down, and at the bottom is a “NEXT SITE” option in a poorly styled webring frame.

Tuttle’s friend is Jason who makes Origami Fine Art Frogs. It’s linked in his homepage, and you can visit Jason’s site to look at his work (pictured above).

One Thing I would like to highlight in Tuttle’s corner of the fictional internet is a very large 100+ pages story called “Manzini”. This is basically a book. This is credited to Tuttle. It’s his book.

Manzini was a comedy I was writing. It’s about people, capitalism, and destroying the world. It WAS good until my websites got hacked. I get targeted a lot. This was a result of a harassment incident that was successful for the harasser.
The hacker targeted most of my writing and inserted really shitty things into it (transphobia, sexism…). My poetry really got fucked up because of it (he made me look like a poetic antivaxer)… as well as my recipes. Pretty much everything.
I tried my best to clean it up but unfortunately Manzini still has relics of that. I included the “as fixed as possible” version of the book because it fit’s Tuttle’s “I hate all humans” personality. It’s also sentimental.
Aside from a full on novel, there’s LOTS of writing in this webring.

To explore the webring, scroll down to the bottom of Tuttle’s main page and you’ll see this:

The first site is the Cool Website Award. Webrings had LOTS of these silly self-acclaimed awards that people put on their pages as gifs. Also, I’d like to point out that you can deeply explore all these pages and find tons of things. The Cool Website Award feature the “Potaterian Church of our Great Divine Electric Love Potato” as their current award winner. Click on that and you can learn about the religious cult surrounding the Electric Love Potato.

Another site that is one of my favorites is a humor site. It’s called “Excerpts from the Super highway of Human Knowledge”. Abbreviated as “EFTSOHK”.
Joke websites used to be HUGE on the old web. That was one of the main reasons for browsing. People would post jokes they collected, or jokes what where submitted to them (if you where popular enough).
This site is a throwback to Dribbleglass, which was one of those.
The writing in this is all original (all the writing is). So these are jokes and transcripts from conversations that I collected over the years with the intention of populating this thing.

Real Canadian Mounties is also another site worth mentioning. It’s a fan site for mounties and features serious Canadian history, as well as Mountie sightings. You have to click on “frames” to enter.
I wont spoil the writing but it’s worth exploring. Lots of humor.

Another site is MUMSY’s CORNER

MUMSY is a caretaker for the Electric Love Potatoes and also a character you come across in another corner of Tetrageddon (ARMAGAD). You find her when you find Tatghoul the ghost.

I also inserted myself into the fictional internet, so you can explore work from the fictional me.
This page also has the credits where I thank all the people that play tested it. Since I’m the only one working on it I added some fake names to make it look more impressive.

I really feel bad at this point for spoiling too much, but there are also sites for many of the characters of Tetrageddon. This whole thing is fairly extensive.
This is also not the only way of finding websites. When you help Cybermonkey escape you find more sites there. These are the escaped pages. 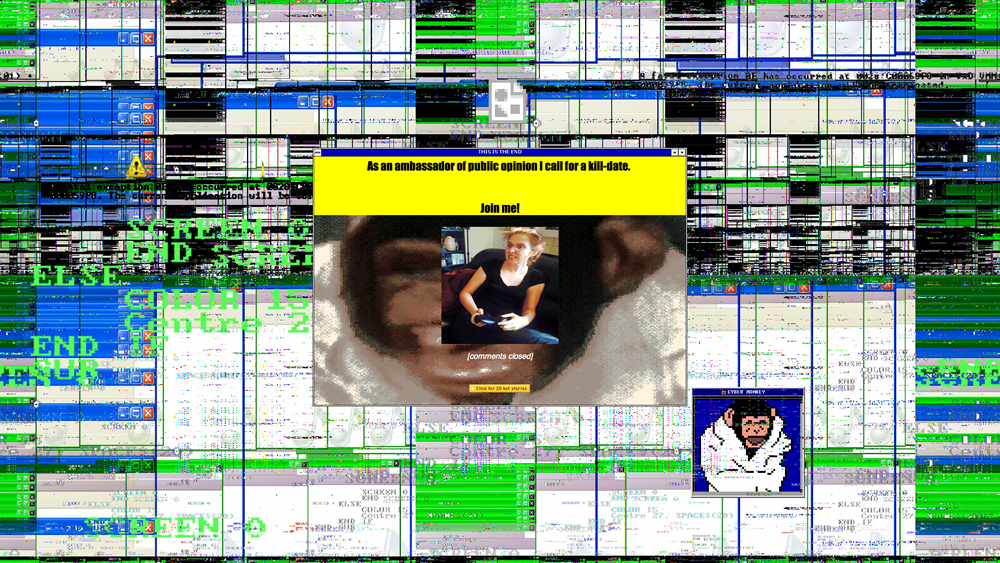 So overall this is a documentation of my fictional internet.

There’s so much writing in this it’s ridiculous. It took forever to make, and it’s a concept that I’m very attached to and hope to keep building on (even tho people will very likely now act like I’m ripping “that new game” if do more work like this).

As I said in this thread (I urge you to read it), it’s important to recognize that games that take on this subject aren’t singular phenomena that just came out of nowhere. There are many creators that contributed to this.
This is also a topic that I have been exploring for 10+ years, and something I plan on continuing to do.
I do not want people to compare my work to, or say I stole ideas from anyone.
There’s a record of me contributing to this topic spanning back as far as 8 years. You can find old interviews of me explaining why I’m doing it even when it wasn’t cool.
I think it’s important for “the discourse” that we be very careful when calling something groundbreaking, never before seen, genre defining… because the chances are that there were people before that game that where contributing to the discussion too. I include my work into this too. People often say that my work is “never before seen” and I’m absolutely sure if you tried hard enough you could find something similar that was made “way back” and forgotten about.
Being “that groundbreaking game” is more often than not a title granted because of opportunities and privilege. Not everyone has the advantages to be championed or promoted in big ways, because not everyone has access to that level of networking and connection. It’s important for us to acknowledge all the other work surrounding a topic.

I’ll be even more clear… I am not a man. I will never have the advantage of “being taken serious” at face value. As “critically acclaimed” as Tetrageddon was, all the publishers that I approached about it turned it down, even if I mentioned that it won the Nuovo and all the other acclaim it got. This isn’t a quality issue. People really like it. The issue is me. I am who I am so I cannot be taken seriously.
For example, the last IGF that I was nominated at (2018), the person hosting gave a shout-out to all returning nominees. I was a returning nominee (even winner). My name was not mentioned (didn’t bring it up), and I even won the last time that I was there. It stung to be omitted like that. Someday I would like to know why.
You can find the video of that award ceremony, but it speaks volumes. I really don’t think women’s contributions will ever be properly remembered.

This post is me validating my contributions to this theme.

I do encourage you to read this whole thread.