Anatomically Incorrect Dinosaurs was released last night. I wrote that line with a big sigh of relief. It’s also a featured game on GameJolt today! I was so happy, jumped for joy! :)

Update! It just made an appearance on Offworld! Play it now: Anatomically Incorrect Dinosaurs Leigh Alexander said you’re (basically) dead to her if you don’t play it. It’s even tagged as that. People, this is serious!

I think this little “detour” turned into a pretty big deal… Like an actual “game”, although you may not call it that, but who cares anymore what a game is or isn’t. This conversation imposes too many limitations, and definitions are asphyxiating.
By my standards it’s a game.
Or not…
Who cares.
I like weird! 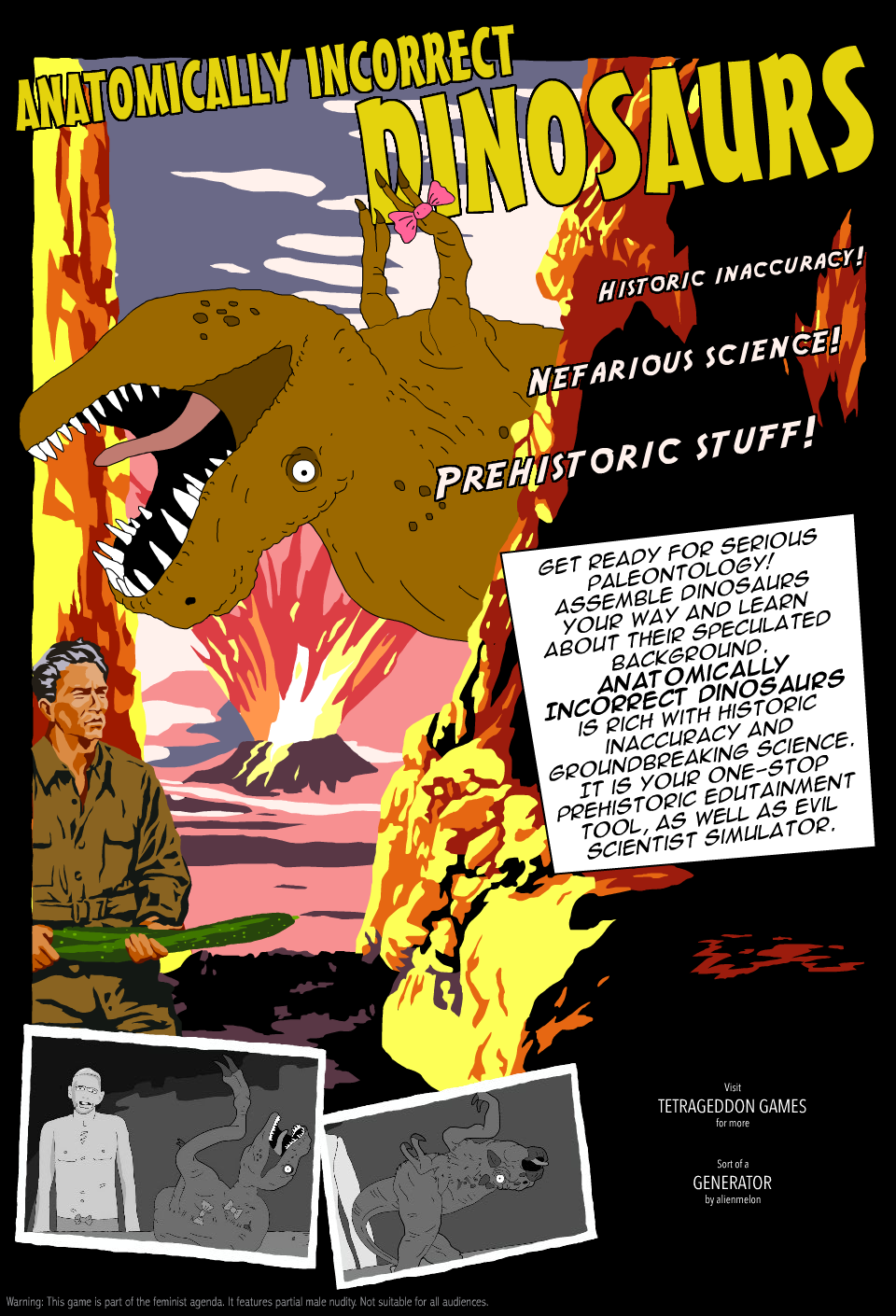 So the thing was born when I needed a break from all the work, and decided to do some weird silly illustrations of dinosaurs. I posted it on Twitter and it got a pretty positive response (along the lines of “lol! WTF”), so I started tinkering. One thing led to another, and I was making a game of it.

I’d like to point out that the thing has a TON of written content. When you talk to the guy at the beginning (your boss) it’s a fairly elaborate dialogue tree that you can engage in. The writing is humorous, so if you take the time to read it (and if the humor is along the lines of stuff you laugh at) it may be entertaining. It also gives some background regarding the dinosaurs, and what is going on. 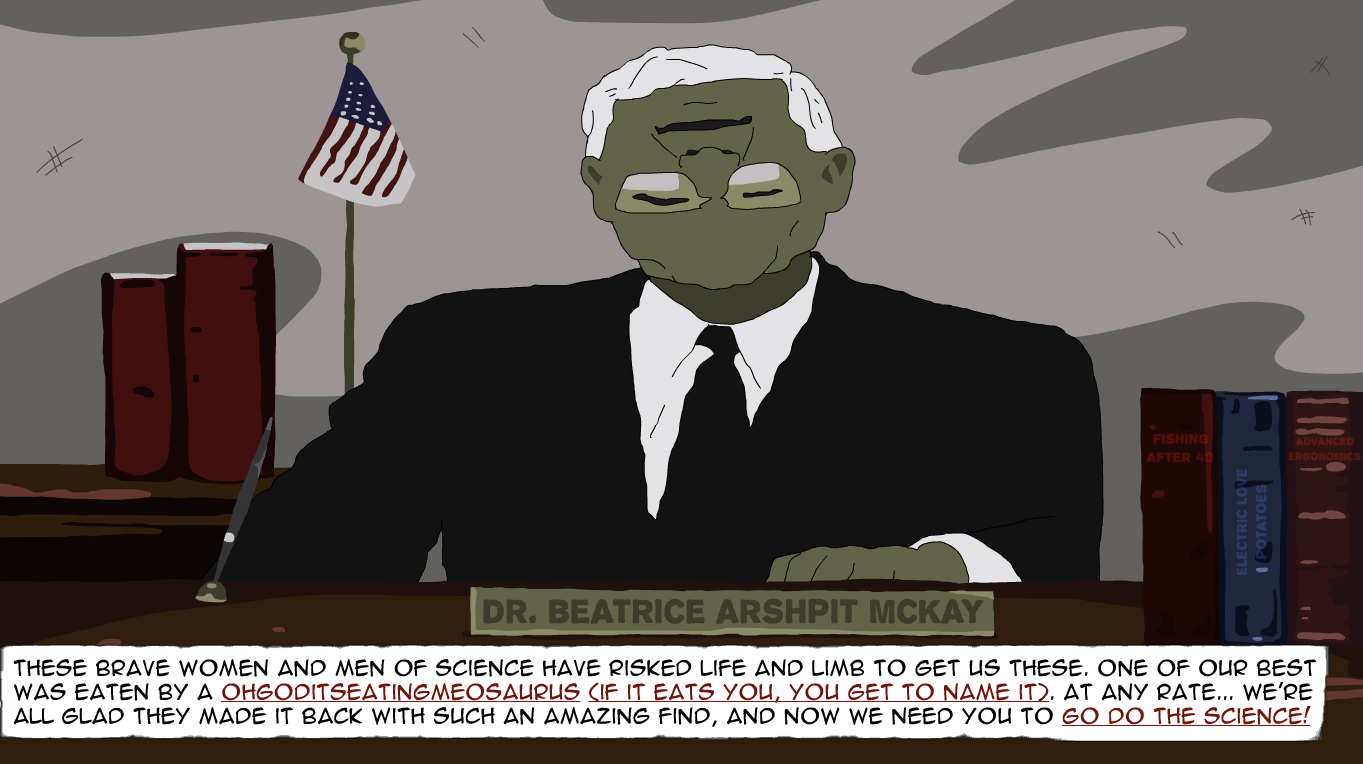 Later on, with your assistant, you can do the same thing. Explore the introductory dialogue. He’ll give you background about his education at the university of “Experiments Gone Wrong” and talk about the experiments gone wrong… share stories. Lots of stories.
Silly thing is you can also “undress” him by “accidentally” clicking on him. I did this because I thought it would be hilarious if someone accidentally clicks on him and before they know it he’s naked because… well… “If you say so sir, you can have my shirt, sir. Anything for science, sir.” Then he’s there making you feel uncomfortable. Science is also sexy, so I would be remiss to pass on a perfect opportunity to include some level of nudity.
Also, to point out, anytime he says he’s a “good assistant” you can normally click on that and he’ll share a story about some mishap that happened at the lab. The writing for these is all stuff from old sci-fi horror movies. ALL of this game is rife with old sci-fi horror stuff. If you have a similar obsession as mine, you’ll probably be able to recognize some of the stories.
The idea behind all the writing was that I though it would be cool if it’s not only about making a dinosaur, but partly like a comic book (old sci-fi horror style). So… reading is recommended (although not necessary).

The thing that caught me off guard while making this, and turned into a lot of work, was actually the UI.
Sure it’s easy to make a UI. Building the dinosaur part was not that bad… Like if you add just the body and neck the eyes reposition to the neck. If you add the head then no eyes… Plenty of cases, but not so bad… Goal was just to make sure the thing consistently looks “wrong”.
But then the assistant comments on absolutely everything you do, and the dinosaur does too.
There are several cases for commentary (which involved several different types of written content and voice-work).
If the dinosaur has no neck, then the “voiceless” reactions take place (silent protests like), or you add arms and it tries to “claw you”. Assistant also comments on this level.
Next is the “voiced” reactions that take place (before the dinosaur is whole). These are fairly elaborate protests where the dinosaur criticizes what you are doing. You can also mute the dinosaur at this point, and everything it says is muffled. I laughed. It’s silly to mess with it then.
Assistant continues to applaud your actions. Both like bows, so if you add those the dinosaur says something nicer, and the assistant applauds this.
It all makes for a fun complex little environment, if you stop and pay attention to all the details.
Dinosaur audio was a lot of work. There are over a hundred voiced comments.
Final stage is when the dinosaur is whole (after you tried to prepare it for the exhibition, and the “incident” takes place). Now it will sing to you (destroy you with its songs).
At this point your assistant is useless, and you can engage in a heated philosophical debate about what you are doing (for Science!). Kind of like any old sci-fi horror themed movie where the creation/monster/mishap can talk to/argue with the creator.
In the end you do not win.

If dialogue, reading, and listening is not your thing, then the game lets you take photos of your creature throughout. It assumes you have a webcam (and I recommend trying it with one) because it puts you into the picture with your creature. Like the old movie posters always have some thumbnail or shot of the doctor. It’s all heavily themed around old sci-fi horror movies. There are quite a few various random backgrounds to pose yourself and monster in. 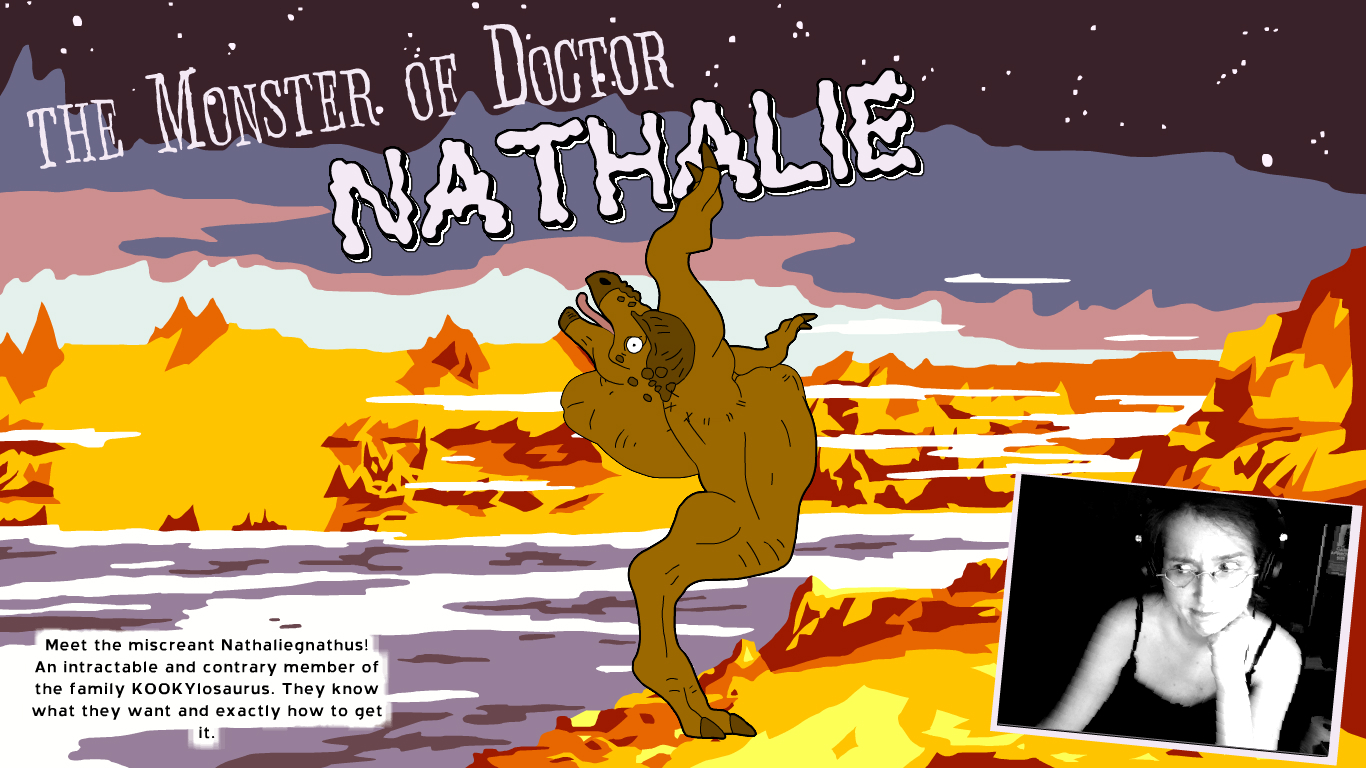 There are also lots of details everywhere. Like the actual window comments on things you do (move it, or minimize it). It will sing “baby don’t hurt me” if you minimize it. I always wanted a program to do that. (small tutorial here on how that’s made)

Programming the placement/building of the dinosaur itself was interesting. I would no longer really call it procedural. I tried to cut corners thinking it would go faster if I made a bunch of graphics and just “morphed” them into eachother to make them seemingly many and random, but it turns out procedural would have probably been less work. EVERY limb is also animated (wanted them to twitch unnervingly).
Minor details are also random. Assistant’s name is randomly created each time, and the name of the institution is too. I figure this will help confuse people further. 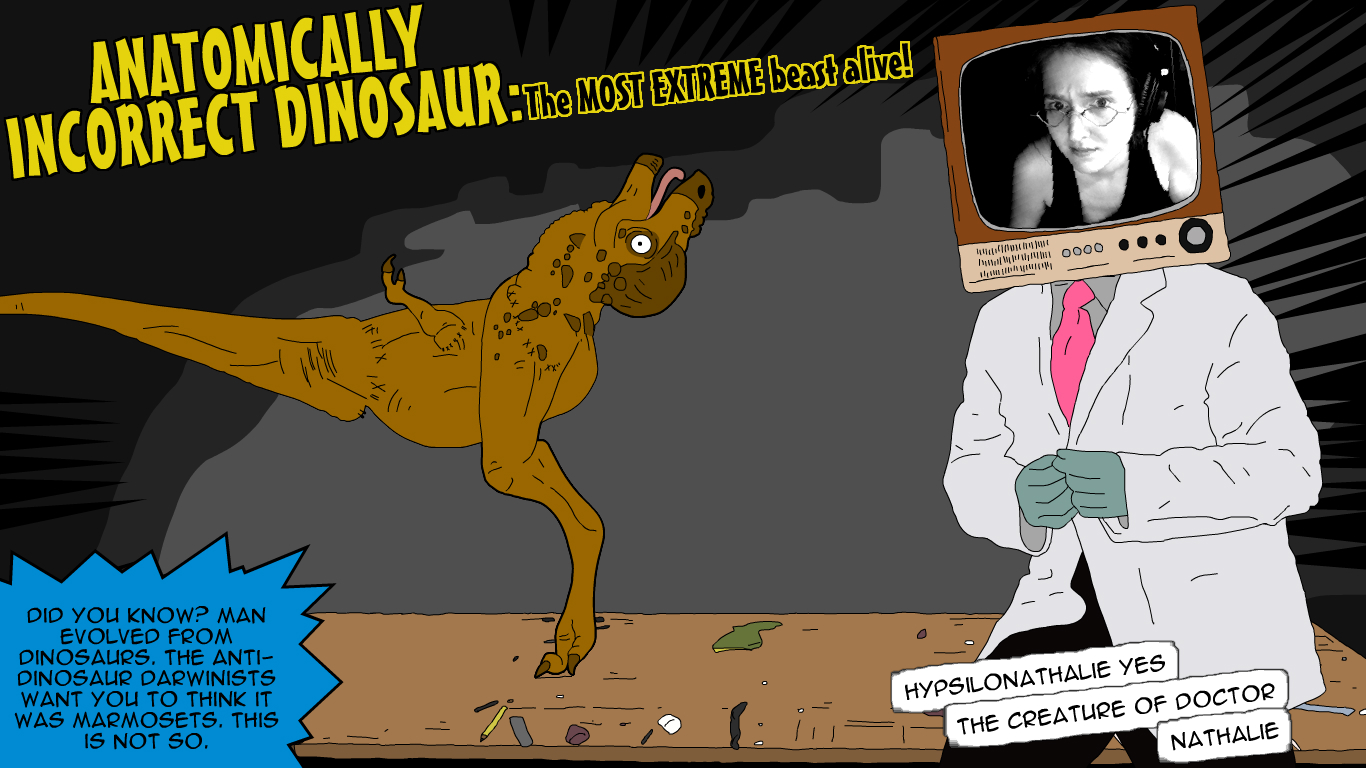 In the end… It’s a very WEIRD game. It makes no sense. There’s no real mechanical-gameness to it (goal, thing to master, etc.)… It’s ridiculous. You do need the “weird” sense of humor to get it, so it will not be for everyone. It’s different. I like it.
If you do like a good laugh, then I’m certain you’ll enjoy it.

Oh! Btw, here are some lets plays already! I laughed menacingly watching these:

I think this one is sweet, because of how he totally got into it.

I’m slowly adding these now as I find them. This one is so awesome. Laughed much.

So absolutely thrilled by the positive reception it has already gotten! THANK YOU EVERYONE! <3