I just published the final update to “Everything is going to be OK” and, with that, this interactive zine is now completely done. This update features a lot of personal writing, and a strange fever dream OS for you to explore. There’s a lot to get lost in.

You can play it on…
itch.io
or GameJolt 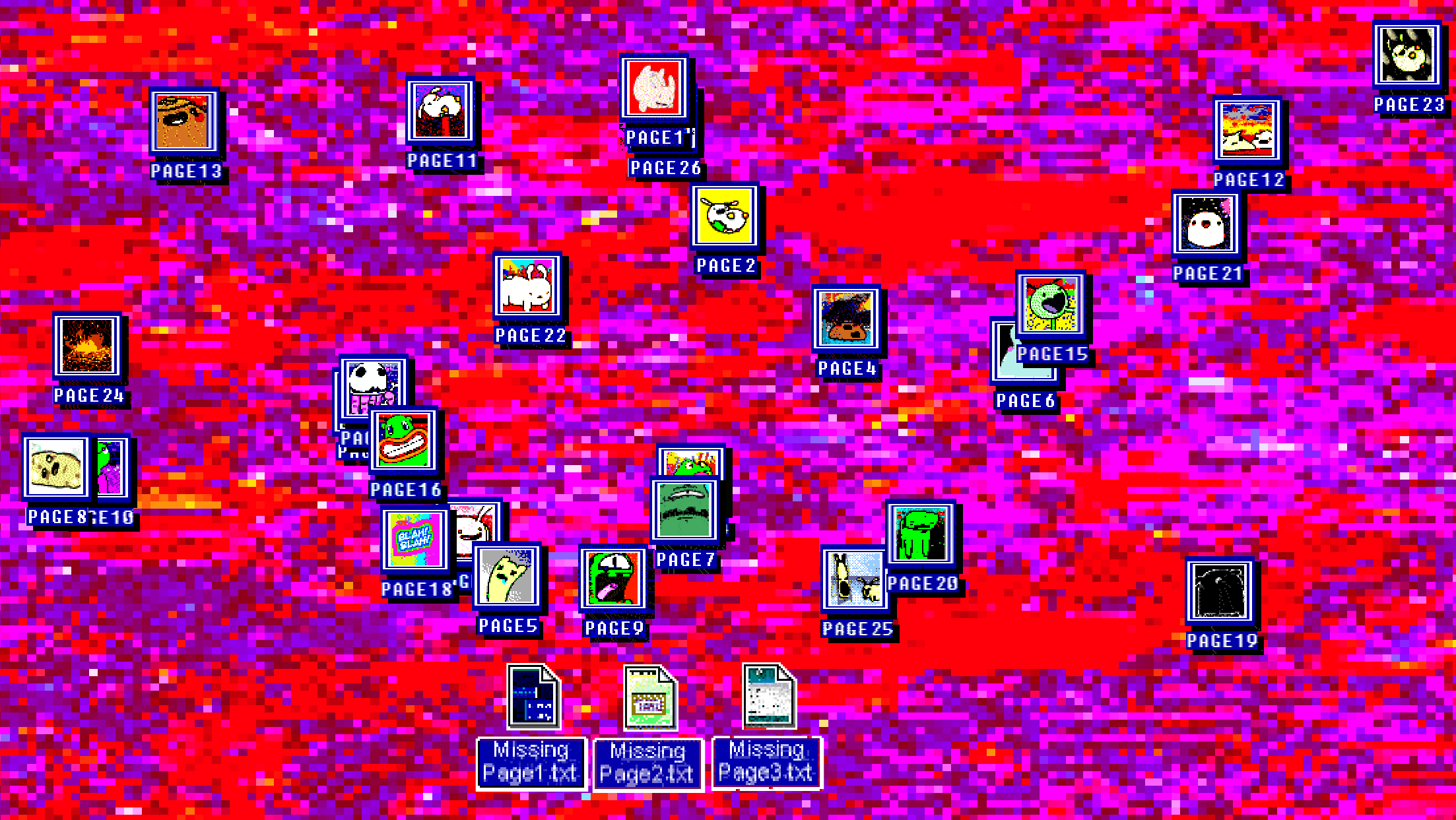 If you feel so inclined, please help spread the word about the update being out. I will love you forever. Thank you!

I also updated the page description, and the itch page has a nice theme with a fire to keep prospective players, journalists, and visitors warm. Cyberspace can be a cold place. It’s nice to give people a small fire. 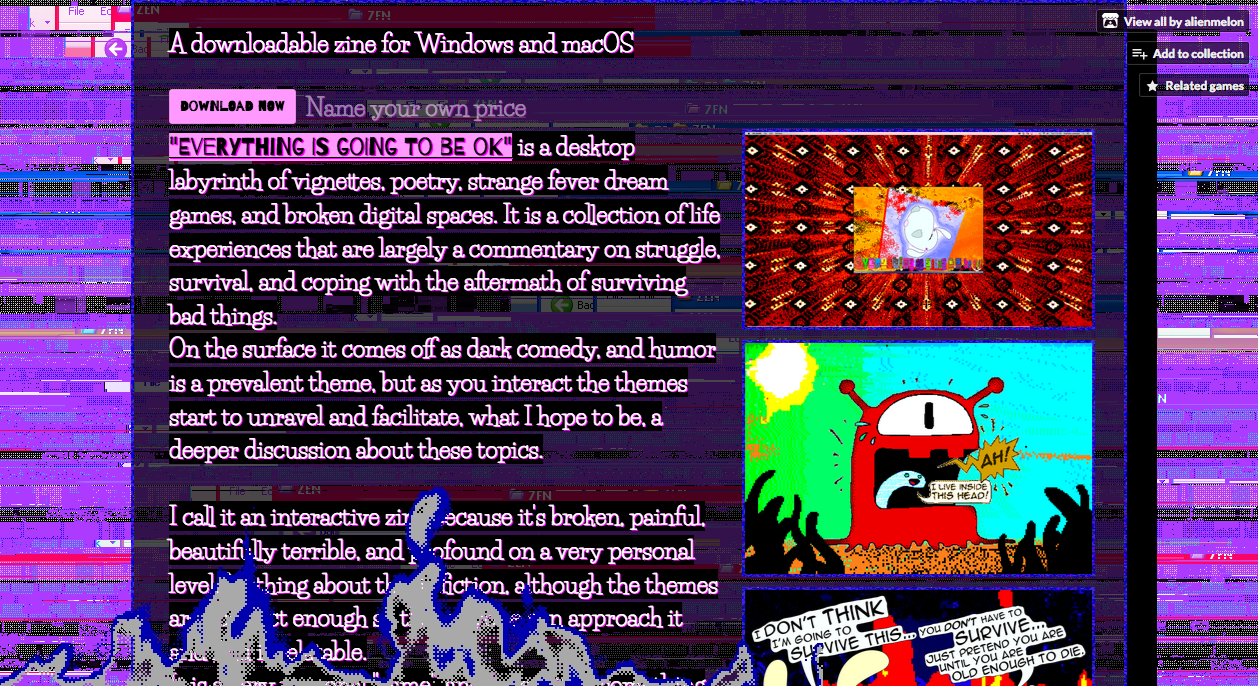 So, first of all, I want to thank you all for support me while I built this. Your emotional support, friendship, sharing what I was saying, and just generally showing me kindness and saying nice things to me has meant the world. Thank you also to everyone that wrote about it. Your kindness has been enormous!
I would not have been able to do it without you, and it certainly helped neutralize the angry gamer vitriol. Just know, that it has made a big difference. Love works! Yay! 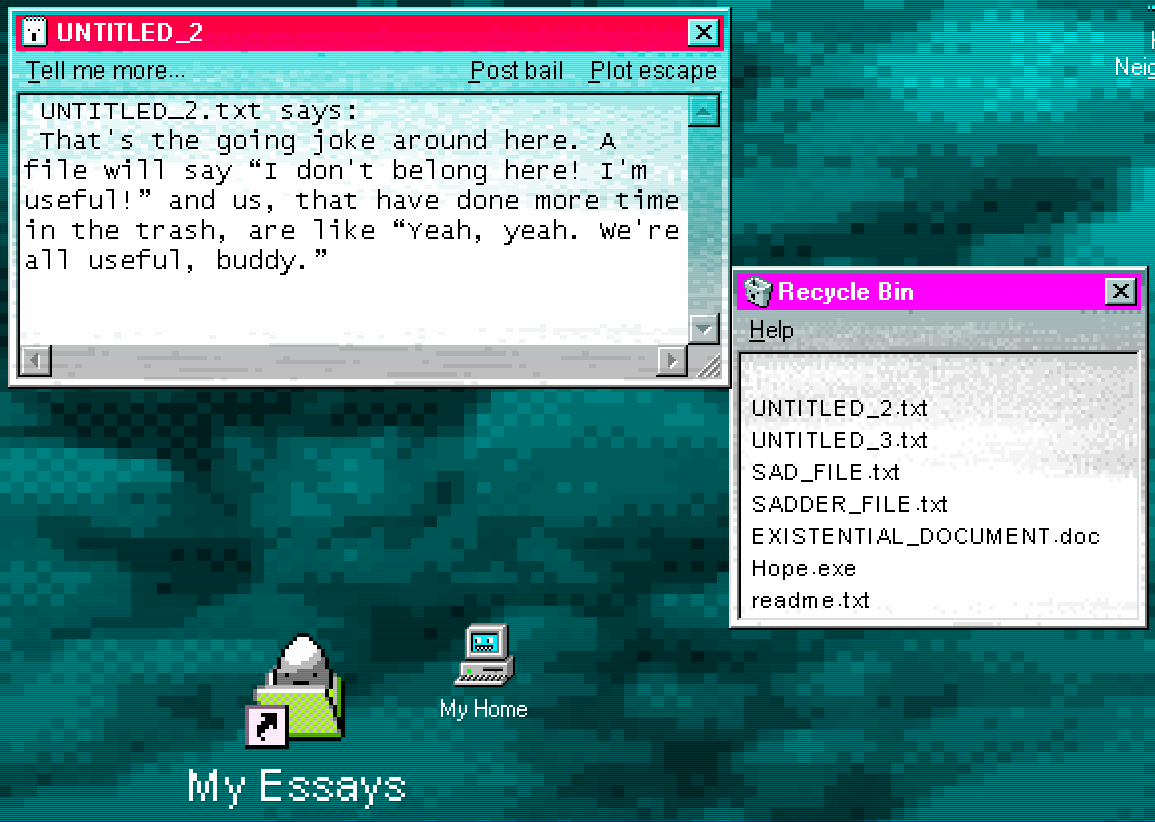 This update is a very personal one. I mentioned why I was taking on these topics in a few articles, this itch.io interview probably says it the best.

“I was prompted to expand more on “Everything is going to be OK” partly as a result of gamer outrage spurred from my post about Day of the Devs, and then more outrage spurred from me talking about games that don’t have to be fun, and then more outrage for me suggesting that games aren’t art if we can’t allow diverse experiences to exist… overall, there’s been a generous landslide of outrage. It’s good food for thought though! So I feel like, fine. I’m going to go do exactly what pisses you off about this “game” and add some seriously real shit to it.

It’s worth noting that one of the most common comments I received was that if I didn’t want to receive this harassment, negativity, toxicity, etc then I should have made a more fun/better game. This was phrased in a variety of colorful ways, but the gist of it reminded me a lot of our cultural tendency to victim blame. It kind of took me back to when I was dealing with sexual harassment or stalking. People automatically started questioning me about what I did to bring this on myself. This is EXACTLY why I made “Everything is going to be OK”. To strip the shame from talking about these things. To, in some small way or another, challenge victim blaming.”

In this update, you will notice three “Missing Pages” floating at the bottom of the screen. These are different from all the other pages because they focus entirely on personal, non-metaphoric, mater of fact, to the point, writing. It’s not fiction.

“Everything is going to be OK” was an important game to make because it took courage to make.
This update even more so. It’s complete now.

This update has all the stuff that I don’t talk to people about, and haven’t ever really shared, because I’m fully aware of the social and personal repercussions this has. At the same time, it is something that I had to put in because this game is about challenging that shame and social ostracization.
I firmly believe that if we could talk about these things, it would save lives.
This is a good medium to challenge that stigma… I mean, why not do that in a medium that is fundamentally hostile to it? Games are a good place to start.
In the end, I think this is a valuable contribution to the sea of work that is out there.

When I set out to make this update I said that I wanted to share stuff that I never talk about, or have never shared with people, even the ones close to me, because of shame, fear, and all the other repercussions.
I said I would do this because I think that games like this matter. I hate the idea that games should be only a certain way, and that if you harass, bully, or otherwise give someone enough hell, you get to silence them. It seems like an effective cultural cycle pitched against victims because this always happens. If you guilt a victim enough, they are silent. So I see how even in something like an art game this behavior perpetuates. I wanted to challenge that. I want games that are personal, open, vulnerable, beautiful, and profoundly painful at the same time. We have a right to contextualize, and share, our stories in our art.

I’m fully aware of all the ways this content will come off as… me airing out my problems, or posting trash about trauma… but that’s the type of shame that silences these discussions and keeps us from ever culturally discussing these topics and maybe even creating a way to cope and heal. It’s the things that we can’t talk about that hurt us the most. Like I said, I think that if we where able to talk about things like suicide, without shame, it would save lives.

So this update is filled with personal writing from me sharing what happened, how I coped, and how I grew out of that.
Before releasing it last night I got very nervous and hesitant about it, but I’m happy it’s out there and too late to take back.

At this point with “Everything is going to be OK”, I’ve literally said all that there is to say about these topics. I’ve framed it, I put a spin on it, I took every artistic and game design approach that I could to make something constructive out of it… There’s nothing more left to add… before this update it still felt like some things where missing.
Like, I didn’t have the courage to REALLY say certain things. Understandably so. This game has been an uphill battle.
For future tho, if I were to ever again make something this personal, it’s best NOT to release it until it’s done so you don’t get attacked by gamers while making it. It will make development a lot easier. It’s probably better to get personal attacks over with in one go, and not worry about a steady stream… minor observation. There are ways to deal with it. I don’t think it’s cause to feel bad, or think that this is sad. I think it’s reason to be determined and keep chipping away at these problems.
At any rate, after this update, I’ve said my peace. “Everything is going to be OK” feels complete.

I’m proud of this update to “Everything is going to be OK”… and the entire work now. It’s a large, labyrinth-like, strange, beautifully terrible thing that you can get lost in and think about life in. It turned out exactly how I wanted it.

After this game. In conclusion, and retrospect…

I wrote a lot about what I was going through, and thoughts on gamer culture. I’ll make a roundup of all these posts so that this is all in once place, but for now most of them are part of the game’s itch.io devlog.

I love what I make. I wouldn’t make anything else. I’m going to hold in there. I’m here, and enormously appreciative, for the people that enjoy my work and love stuff like this too… not going to downplay it. When someone expresses enthusiasm for what I make, it makes me so happy. It’s very energizing… no amount of hate will hold my passion for this back, but I’m not going to lie and say that this is going to be a walk in the park… or ever has been, for that matter.
Nobody said that it would be easy. Looking back, at the worst phases of “everything is going to be ok” I ask myself if I could go through that again. Short answer would be yes. This is stuff that is worth standing up for.
The fact that experimental personal work exists makes games better and richer. It deserves a place, and the same amount of respect that “normal” games get. I will fight as hard as I can to keep doing this… so I’m off to the next project.

lol it’s certainly a roller coaster. When I announced “everything is going to be ok” (you can read the original announcement here, lol it’s great) I wasn’t sure if I could hold in there long enough to finish it, or if it would get done, but it got done!
omg tho… so tremendously grateful for the fact that Chris Priestman picked it up and wrote about it.
I’ll just leave this quote here, because I think it worked out in the end:

“Despite her fears and emotional exhaustion, Lawhead is diving into her creative projects as a way to not just cope with it all, but to keep fighting. “Art has always been a force of change, the tool of dissidents, and that subliminal subversion that slowly wakes people up,” she said. “If games are art, and we sincerely believe that, then now is our time to act like it.””

So… now… getting into this next project… I feel the same way. At any rate, I’m optimistic that I can hold in there long enough to make another. I’m very excited about it and have a million ideas. I do have a concept, and direction, but don’t want to announce anything until there is more to show.
I won’t overthink the future because that seems like a scary black hole to fret about.

I will also probably release a few smaller things before beginning this next big thing just to clear my head. This has been a very large and emotionally exhaustive project. Making smaller silly cute joke things helps recharge.

Also, going forward with Steam…
If I manage to have it on Steam (eventually), I will announce it on Twitter.

And also… I gave two talks at GDC. They are both free on the vault:

My favorite is “Alternative Paths in Indie Dev” because it’s a wonderful lineup and I like what I said.