The Electric Zine Maker is a printshop and art tool for making zines. It includes a drawing interface. You can import images, size and place them, write text with any font that you have installed, smudge, paint, and a number of other options.

It's out!
The Electric Zine Maker (public beta)https://t.co/yOVfooYtCv
?? Easily create, draw, write, and print zines!
? Folding instructions included!!
?? You can save them, and re-import them.
?? Made with collaboration in mind.
? Try it! It's free!! ?
(rt's appreciated ?) pic.twitter.com/0DgiC24XaN 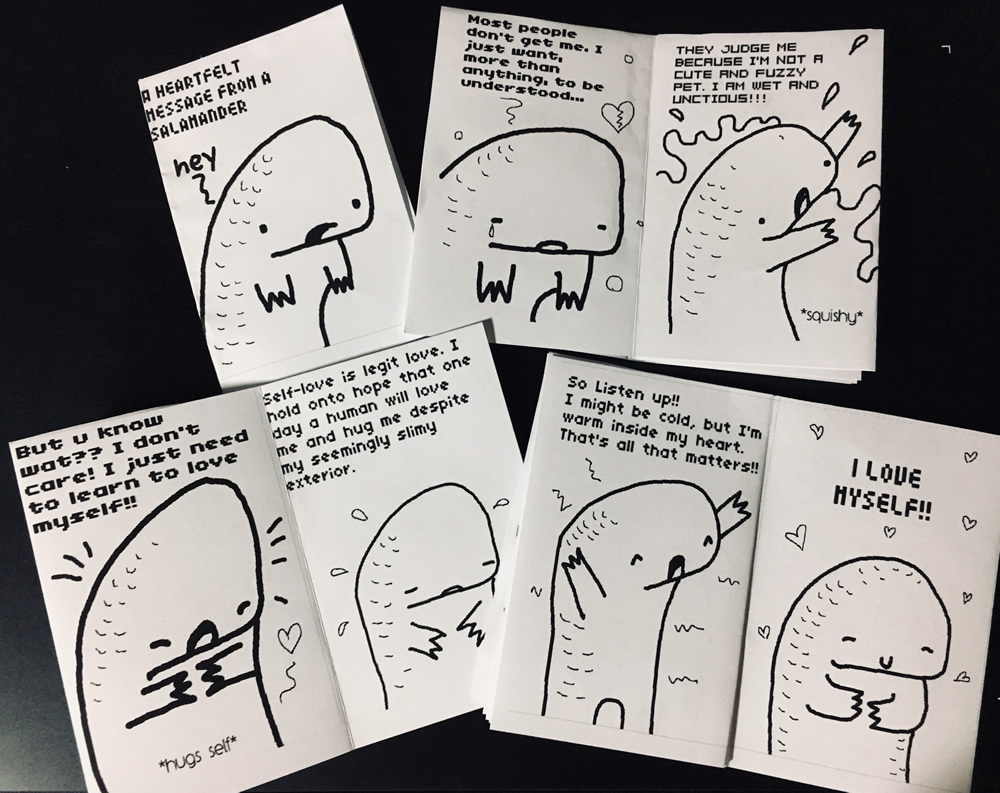 More tools are being built for it. I’m going to have a set that’s a throwback to Kai’s Power Goo where you’ll be able to squish, squash, and smoosh images.
I’m also going to add stranger, slightly nerdier, drawing tools based on computer math things. Like one being called “perlin chalk” and it’s kind of like chalk but you draw perlin textures…
As I stated in this announcement post about it (you can read that if you want to know more about what’s planned for it), I really want this to be a playful tool where the drawing aspects are unique to computers. It doesn’t necessarily imitate art tools you have in real life, it offers unique and strange drawing tools that you wouldn’t be able to get in real life.
I think this makes things curious and playful. Like there’s an explorative aspect to goofing around with weird drawing tools, and the space feels like as much of a toy as it is a tool.
It’s planned to be a playful tool with which you can create cute little things. Like an “art toy”.

At the moment I’m working on fixing a lot of the bugs people reported, and adding some functionality fixes. For example, printing reverts to US Letter and that makes it difficult for A4 folks since they have to manually change the printer paper setting when they print… So there will be UI enhancements to allow you to choose better settings. Not having a windowed mode was another oversight… So yeah, there are some things. I hope to have an update out maybe this weekend or next weekend (so bigger bugs are fixed).
I might even get the authenticity filter into it that I ALMOST have done! Like, that one will be the tiny skeleton icon that you see in the screenshots (not included in the beta) and you’ll be able to choose between “zine aesthetic” settings (like it looks like it went through a photocopier… desaturating, pixelation, floyd-steinberg, monochrome, halftones…)

I can’t wait to build on this further! I’m totally planning on supporting other zine types (not just 8-page fold), but like the ones where you staple and cut and all the other things involved in zine making. Having something that’s cute and playful and you can make zines (any you want) and just hit print would be a dream… Like I’m totally going for that.
Secret agenda for this is to make something that’s appealing to kids so they get into zine making because of it!
When I was introduced to folding zines the 8-page fold seemed really intimidating. Had no idea it was that simple until someone encouraged me to try. I think the biggest hurdle is how do you print and draw on them, and how should a template look, and what sides of the paper… so having something that easily takes care of all that would make zines a lot more accessible to people that find it scary.

Of course, a lot of “life” to this comes from the UI work. To me UI isn’t just UI. You’re designing an actual space that people will be living in. If you think of UI as an environment, where you can even tell stories, then UI work is a very creative thing. I think we make a mistake by seeing UI as a purely functional “boring” thing. It’s actually another “space” to create. Looking at it as a thing that has dimension, and purpose, like any other space you construct in games makes a big difference.
You balance it like you balance game design. Tho, in this case, you are balancing between usability, and your UI’s atmosphere.
It’s still rough around some edges. Like wow there’s a lot of work to do. This became a pretty big project lol. I wanted to get something out there, but I feel like this is the start of something special.

* If you like it, and it has been useful to you, and you believe in my capability to pull this off, please consider paying for it so I can cover development costs.
* If you find bugs, or have thoughts, my email is in the readme.txt when you download it.
* ALSO there have been reports of false positives in virus scanners. I can assure you that it’s safe. If this happens please let me know so I can report the false positive. Avast says they cleared it in their database. Here’s a picture of that:

Other zine tools and resources that I stumbled on and are really cool:

Edit: adding Slaptrash
https://www.kickscondor.com/slaptrash/
This is a very smart little web based tool that’s reminiscent to the online “meme toys” from the pre-social media days meets zine making. You kind of piece together pieces of the internet to make something. I think this little thing is brilliant. Also, it gives you HTML embed code! You can use it on your own website.

GoofyGeekEntertainment’s How to make a Quarter Size Zine
They also have more zine related “how to’s” on their itch page: https://goofygeekentertainment.itch.io/

Other development resources that were very helpful to me:

Matrix Operations for Image Processing (1993)
Scale2x Algorithm
https://www.pl32.com/tutorial/sraster/sraster.htm (was looking at old image editing tools, and how they handle things like dithering or whatever, and found this. good list of names. very odd thing to dig up.)
open-source cross-platform real-time video effects plugin system. (this one is a strange and interesting relic)