So, wow a lot has happened since my last post. The time between the end of last year, and beginning of this one has been pretty crazy. Now that things are somewhat calm I’m taking the time to write an update. Yay!

To start with the best news…
“Everything is going to be OK” is nominated for the IGF Nuovo award!
It also got an honorable mention for Seumas McNally Grand Prize.
I’m blown away by this. This is the second Nuovo nomination for me!

I find this amazing. Considering all the up’s and down’s this game has been through, harassment aside, there where so many points where I thought I couldn’t do it. It’s such a big and overwhelming project to take on as a solo-dev thing. It feels good to occasionally get hit with how far it’s come… and that it worked out.
I’m so happy about all this.
I’m also very grateful for all the positive reinforcement, kind words, and support from people that bought the game. All the retweets, and nice comments… It’s meant the world to me.
I do hope this final update to the game does justice to all that support. I’m excited about it.

Itch.io also posted an interview with me discussing the game, and what’s next.
“Everything is Going to be OK: A conversation with Nathalie Lawhead”

Everything is Going to be OK is one of 2017's most personal, interesting games. We interviewed @alienmelon to figure out what's next and what she's learned from a tumultuous year. https://t.co/ztAVNaclH1

I say some interesting things about games, and what games like this mean to me. To give a better idea, here are some quotes from the interview…

“The game has been a crash course for me in regards to how much more work there is still to be done in carving out a space for games like this. Reactions like “lol, acid” and “what the fuck weird game” tell me that we have to really work on a more nuanced way of discussing these games. They are legitimate art and we can talk about them without this dismissive language that’s based more in ridicule than critical discourse. These games matter too. The creators put a lot of effort in them. The popular view seems to be that they are a joke, or exist to be laughed at.

Art requires space for personal interpretation. You look at it, you listen, and you think. It’s kind of an exchange between you and the art. Critical thought is so important. In most of these popular game spaces, there isn’t room for that. It’s about being cool, acting, and throwing smart comments around. The consumer culture surrounding games just does not mix well with art.

In terms of accepted behavior, the space encourages harassment more than it does anything insightful.”

“I was prompted to expand more on “Everything is going to be OK” partly as a result of gamer outrage spurred from my post about Day of the Devs, and then more outrage spurred from me talking about games that don’t have to be fun, and then more outrage for me suggesting that games aren’t art if we can’t allow diverse experiences to exist… overall, there’s been a generous landslide of outrage. It’s good food for thought though! So I feel like, fine. I’m going to go do exactly what pisses you off about this “game” and add some seriously real shit to it.

It’s worth noting that one of the most common comments I received was that if I didn’t want to receive this harassment, negativity, toxicity, etc then I should have made a more fun/better game. This was phrased in a variety of colorful ways, but the gist of it reminded me a lot of our cultural tendency to victim blame. It kind of took me back to when I was dealing with sexual harassment or stalking. People automatically started questioning me about what I did to bring this on myself. This is EXACTLY why I made “Everything is going to be OK”. To strip the shame from talking about these things. To, in some small way or another, challenge victim blaming.”

For the sake of not repeating myself in this post, here’s some well phrased stuff about the upcoming update.

“The update will be sharing my own conclusions from past experiences and what I did to feel “ok” again after them. I’m making a strong point not to blame people that consider suicide, or have to fight with that level of depression. I discuss how we justify how important the abuser is, how important their work is, how much value they bring to society, and based on that value, we judge their victims. I point out how this abuse is on all of us as a culture, because we enable the abusers.

I also discuss hope at the end, as a survivor. The personal strength of the survivor. Pride, and hope, are an overarching theme. After this update, I really can’t make things more clear. I hope that it will create some understanding.”

You can read the entire interview here. It’s pretty good. If you like my work you may find it insightful.

I love itch.io and GameJolt. I feel tremendously privileged for all the support those two sites have given my work in terms of just existing, and helping spread the word. It’s so cool that places like this exist.

In other, other news… TakeThis wrote a cool mention of “Everything is going to be OK”.

“Such honest vulnerability is a powerful statement in the face of the harassment that’s so rampant in the video game industry.”

So like, yeah… It’s a really cool mention. :) Happy that I have the ability to do this. Feel very privileged to be able to work on this update.
I feel like making games is so financially unstable (uncertain), and with all the work you have to do to be able to fund this (from your own pocket), it’s amazing just to pull something off. Very proud of “Everything is going to be OK”.

In other, other, other news…
I FINALLY got a Patreon account!
You can check it out here: https://www.patreon.com/alienmelon
Yay! Money!

“You don’t have to pay money to support me. I am also powered by hugs, nice words, and love, but if you feel so inclined to send money everything will go to creating the next game or bettering the current project.”

After posting it, it’s up to $23 per month and omg I’m melting into a puddle of feelings. Thank you everyone for your support!

In other, other, other, other news…
Mixtvision Digital is helping with “Everything is going to be OK” as a kind of publisher! They have been helping showcase the game in Europe. Because of their help the game will be coming to Steam!
I can’t say when, but I hope that I’ll have the update ready by then so it can launch there too.
I never announced that because I guess I’m a very busy person.
They are great people, and a tremendous help.
Here’s their website: https://mixtvision.de/impressum/
Here’s their Twitter: https://twitter.com/mixtDIGITAL

Ok, now… some news about “Everything is going to be OK”‘s update…

I’m on the last of these final pages for “Everything is going to be OK”. I created the environments for the writing. As of writing this, there is only one more left to make. After I build the last environment I’ll focus on the writing, which this update is mostly about. Large portions of it are done already, so I’ll definitely have something new to show at IGF. 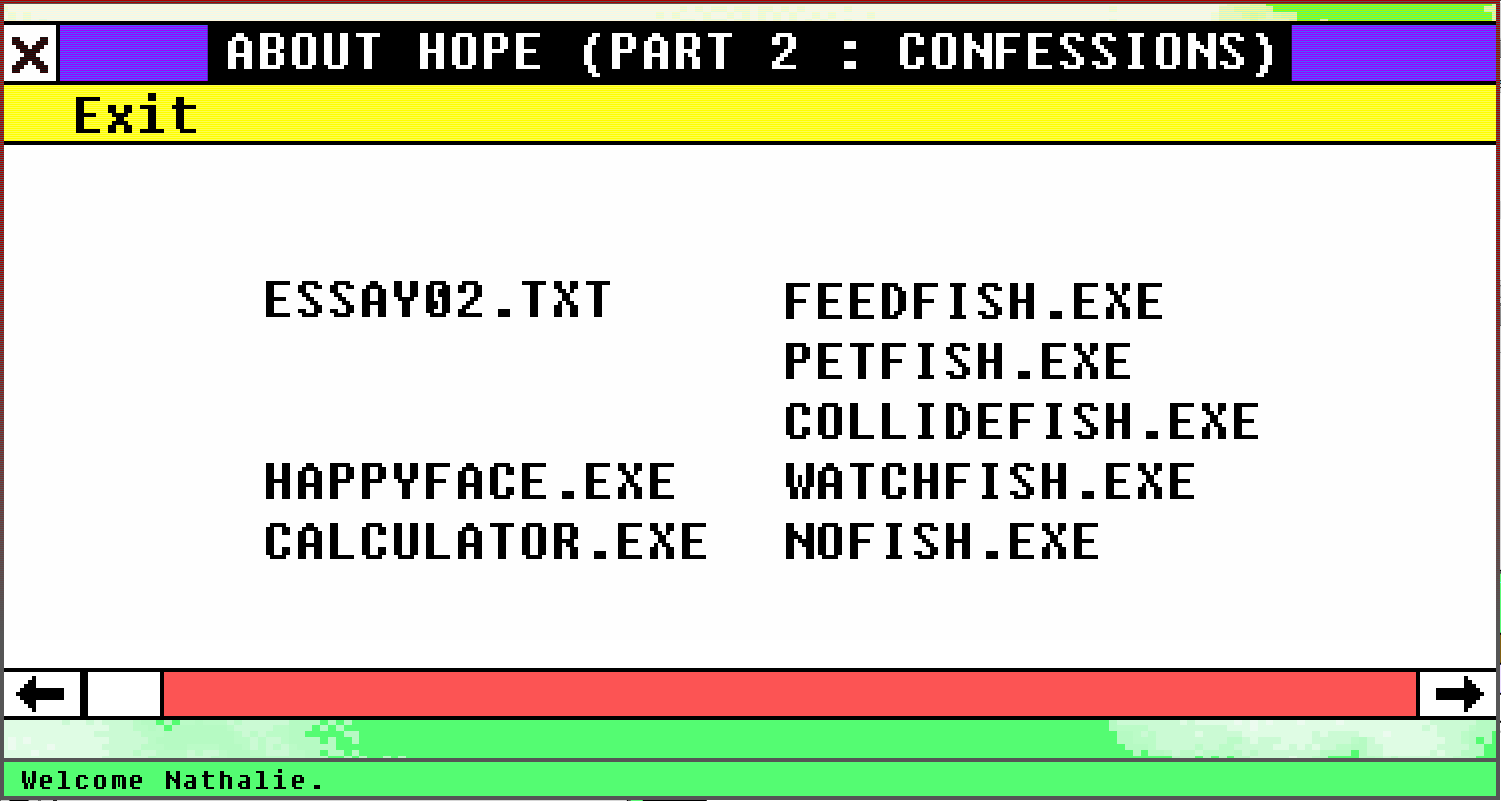 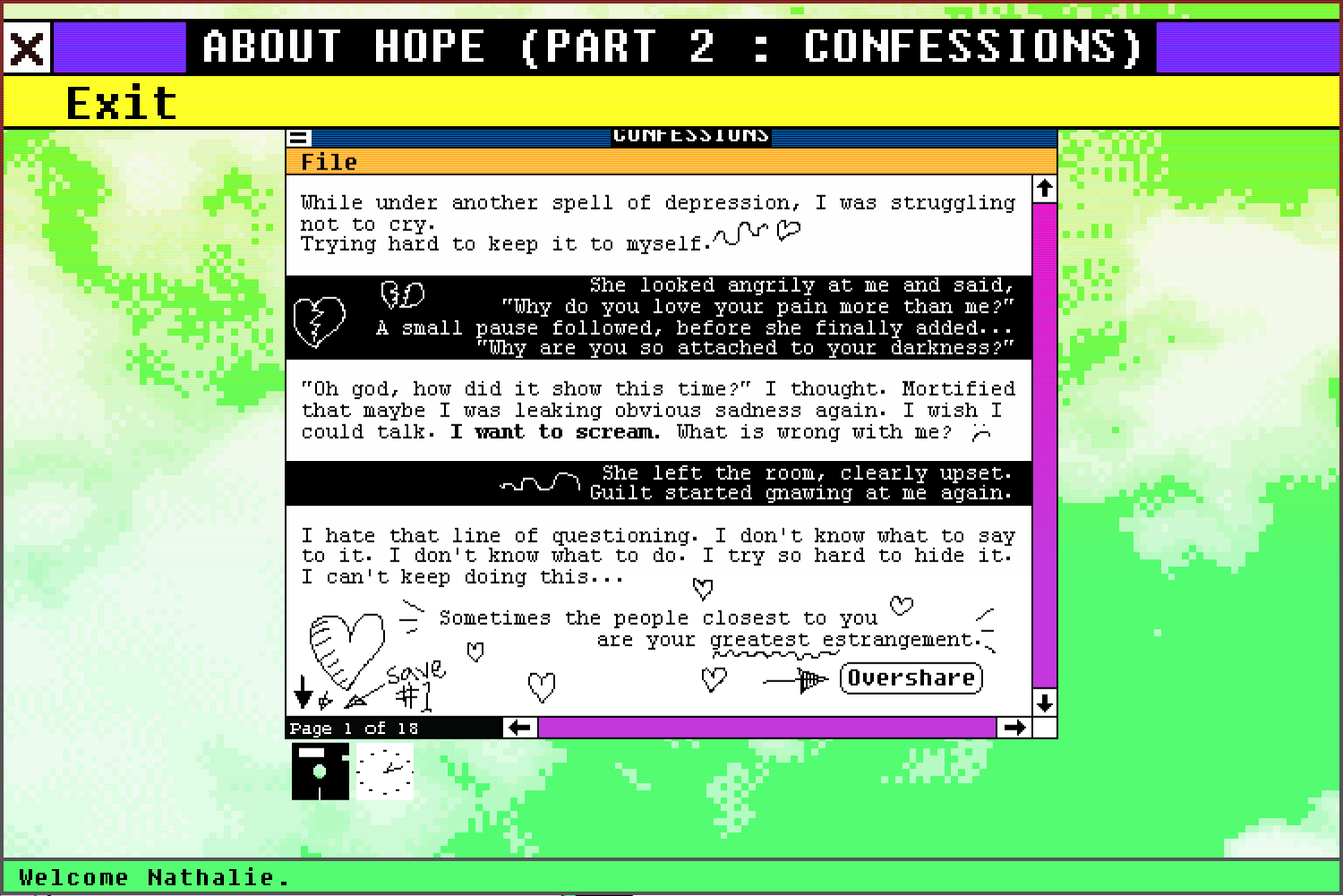 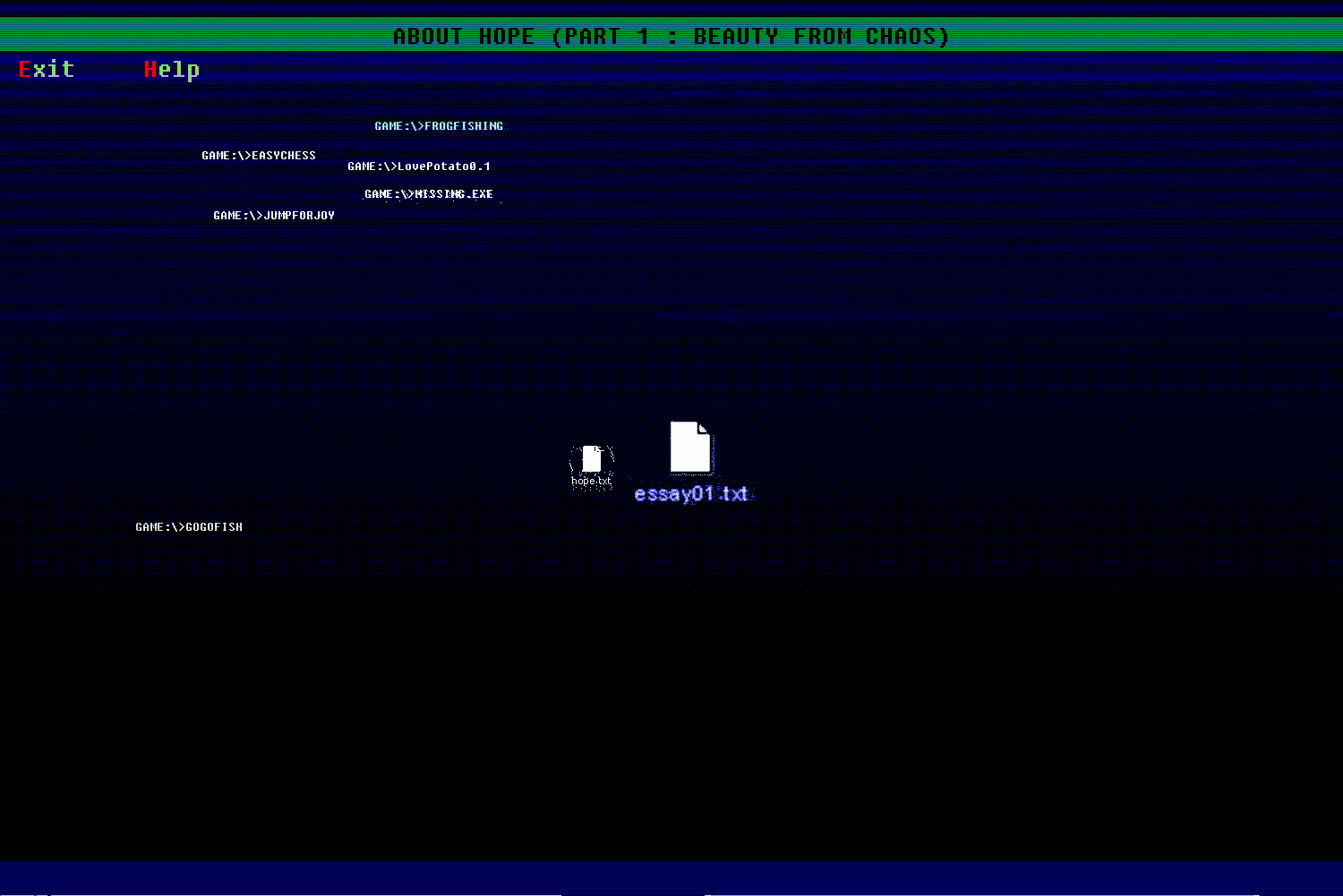 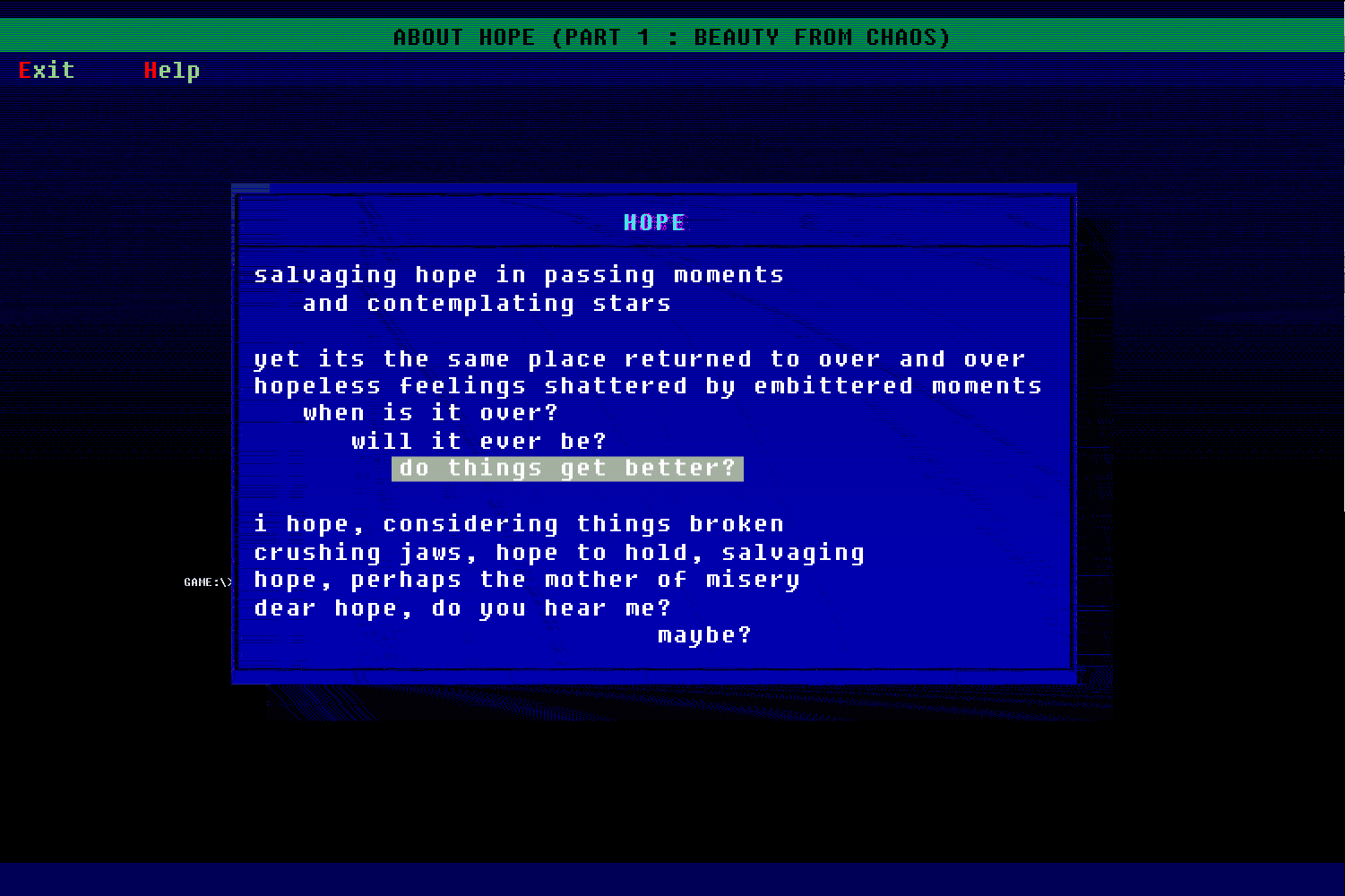 For all of these environments, the primary function is a “new” desktop that opens. Kind of like sub-spaces that exist over the main space (main menu). I’m making them look like throwbacks to various old desktops.
Oh, and by the way, there’s this amazing post about “Vintage Windows GUIs in Everything is going to be OK”
So, like, you see that a lot is being referenced in the visual style. OMG this person found all the references too. Their old school UI knowledge is massively legit. 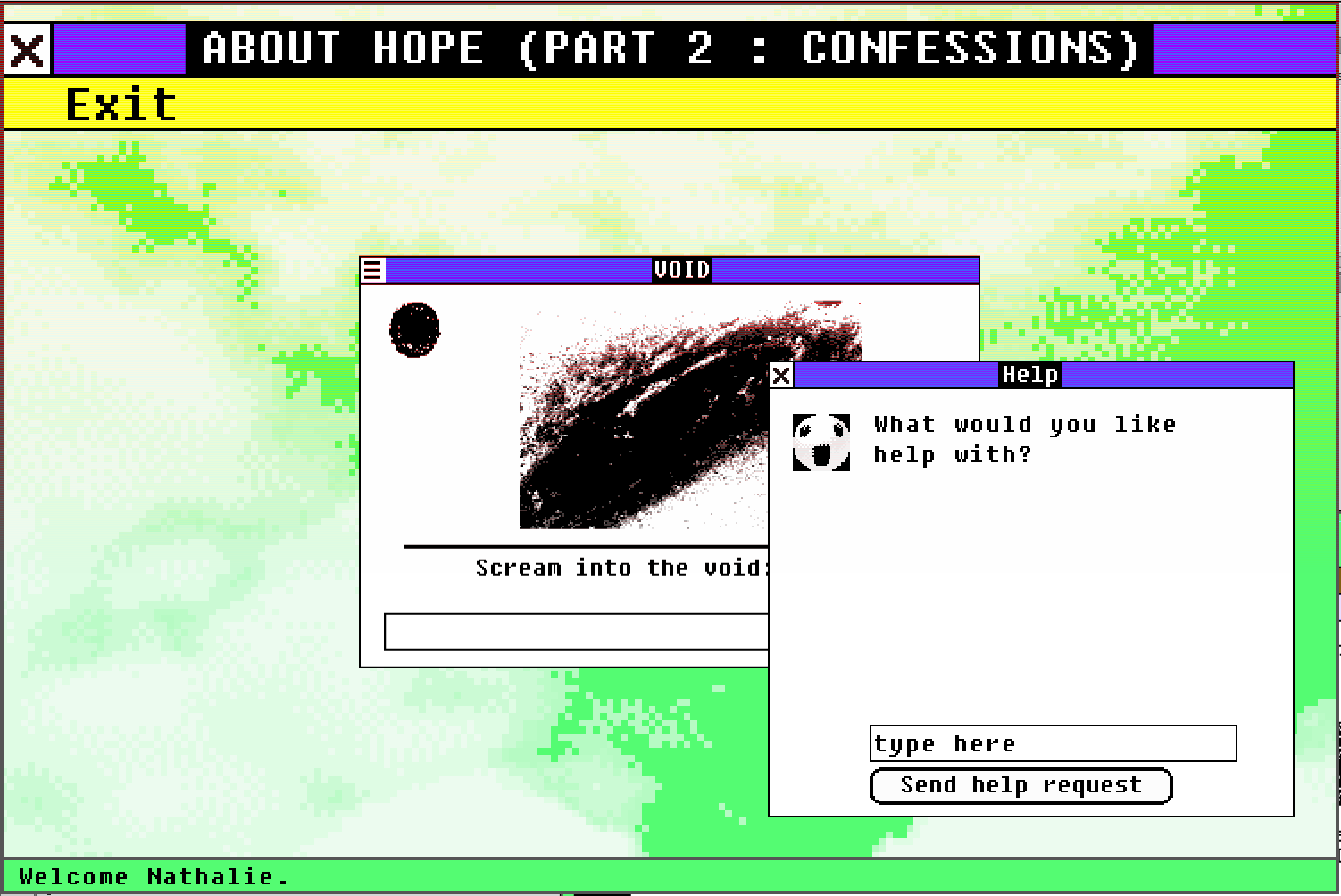 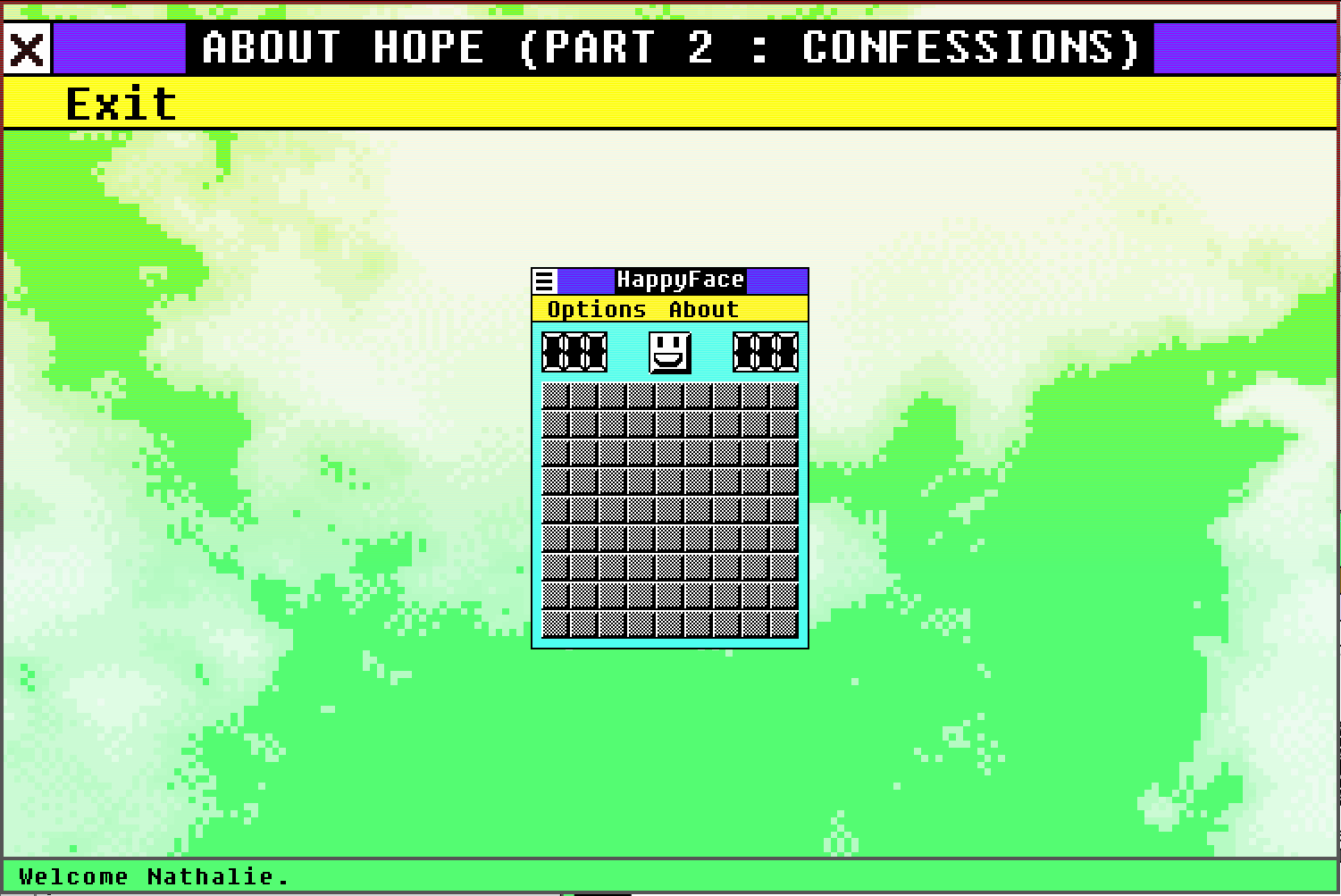 In this update, especially for this particular use, UI nostalgia is important because it creates some sort of common ground. It’s good familiarity to work with. It yields itself well to intentional dysfunction and brokenness. Fake errors work well in these contexts. People already expect certain functionality, and behavior, so there is a lot to work with in terms of these expectations.
Because the UI’s are “old” the dissociation works well together with relatability… 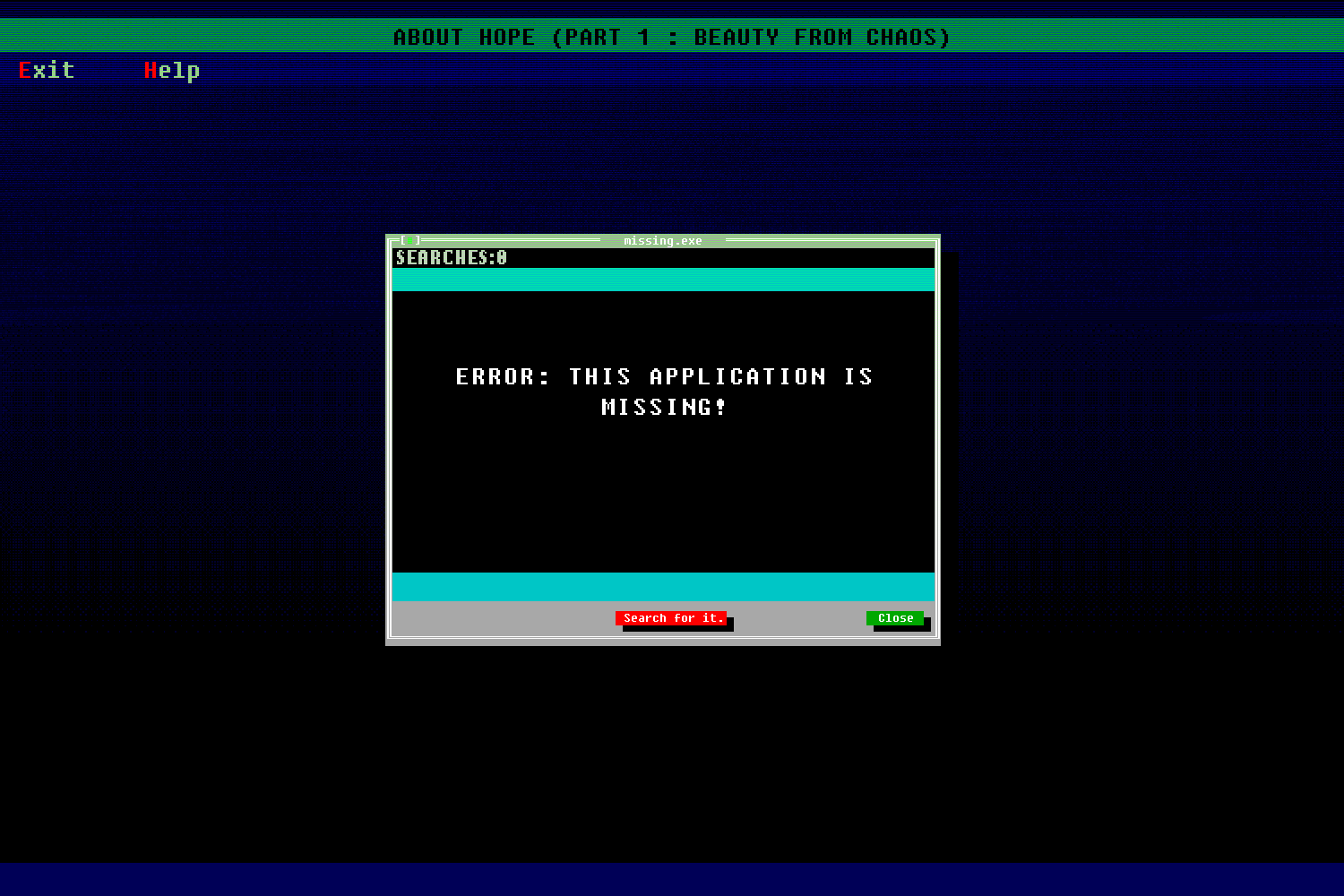 The update might be underwhelming to some. The focus is entirely on the text/writing. I suppose if you like Twine, you might enjoy this. You have to read. I don’t know if it will be “big” enough, but I think the messages work so this is 100% worth it for me. I’m currently very overwhelmed at all the work that needs to be done. 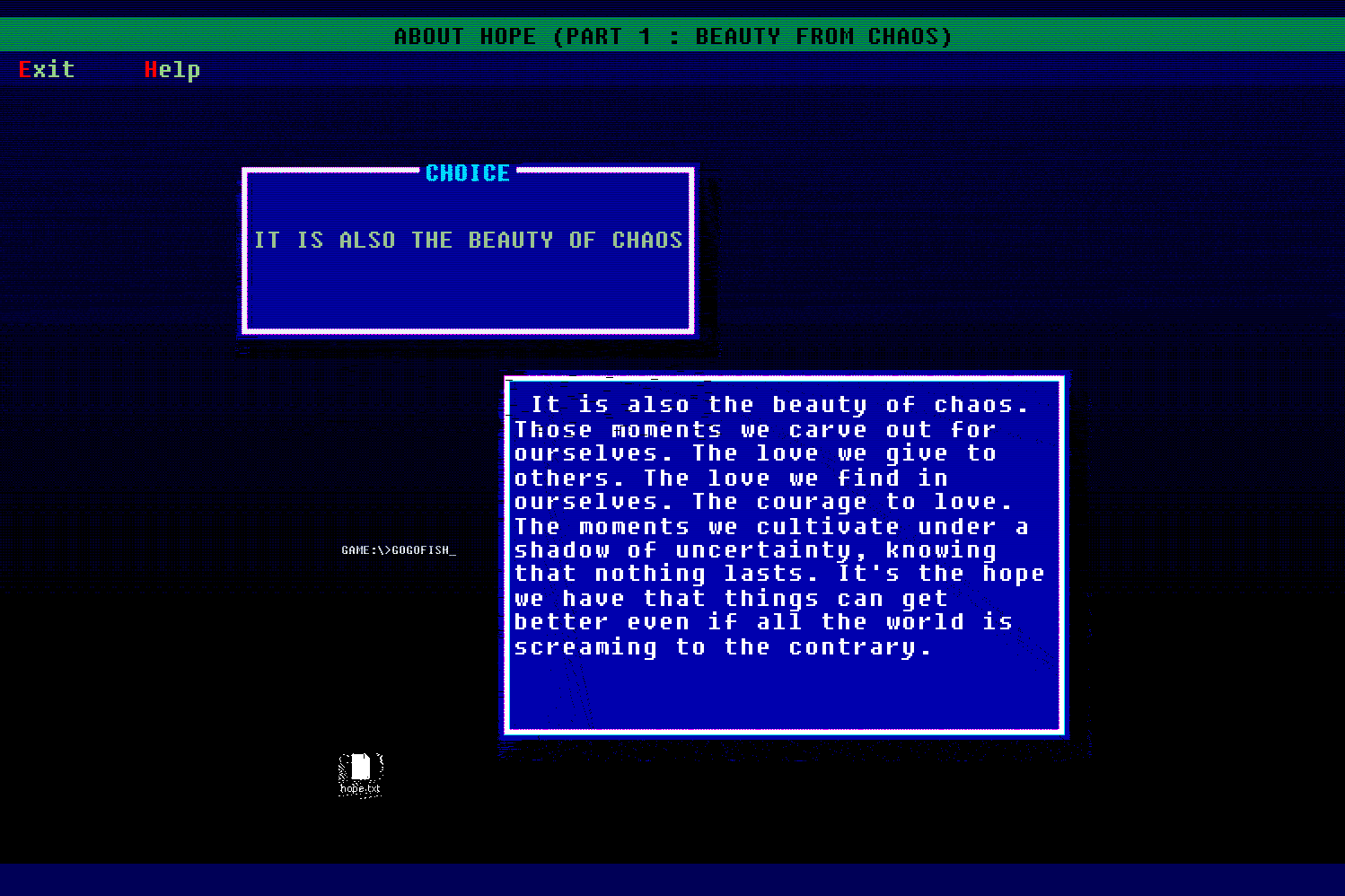 Lol looking back at all the stuff this game has been through from start to finish there were so many points where I thought I couldn’t do it because it was such a big overwhelming project. I am so happy it worked out.
I suppose I should expect the same with this update, or maybe the fact that I’m always freaking out about the workload, and quality, and all the things, is what makes it good in the end… hmm… I will never know.

Ok. That’s it for a while. If you are going to GDC, come by the IGF Pavilion! I’m going to be there.