This is a cross publish of a post I just put up on itch.io.
Itch.io has started supporting blogging! My posts so far are…

* Video game blogging at the end of the world (hello world!~)

But I swear I will get back to posting here too! I mean to use my itch.io blog for short form things, and this one for long form writing… Tho it’s kind of turned on its head right now because blogging on itch.io is very cool and I cannot help it.

Thank you… Ok here we go…

“RPG in a Box lets you easily turn your stories and ideas into games and other interactive experiences! As its name suggests, it contains everything necessary for doing so, all packaged together “in a box”. The software is designed with a fun, beginner-friendly approach in mind as to not require any programming or modelling knowledge, while still providing a wide range of customization and openness. You can export your game to a standalone format for Windows, Linux, and MacOS, allowing others to play it without needing to own RPG in a Box!”

A while ago I wrote about RPG In A Box and have been following its development ever since.
It’s the type of tool that you root for.

RPG in a Box is an approachable voxel based tool that lands in a similar realm of relevance that fantasy consoles or Bitsy do. It features a low-fi accessible game development environment, and is a tool that’s incredibly flexible for how it focuses on reinforcing the core basics behind building a game.
Such tools benefit from their supposed simplicity, each in their own way taking game development back to the heart of why we fell in love with making games. Counteracting the constant march toward photorealism, perfection, and grand scale that modern game development environments offer… these smaller tools let you explore the simple joy of just making a game.
They lower the bar by removing the need for said “bar” altogether.
In RPG in a Box’s case, people often compare it to ZZT (1991) and this is why I make the comparison to fantasy consoles.

In a way, every tool that bravely keeps the dream of low-fi accessible game development alive, is a fantasy. Such tools are beautiful, egalitarian, and creatively empowering. (See also: Bitsy or GB Studio)

RPG in a Box is an incredibly generous tool with a wide variety of out of the box features. Its flexibility makes it an environment that’s easy to get into.
The first time I checked it out, I was blown away by all the stuff it just had… built into it. Features ranging from animation, art creation, sound, UI, to visual scripting… and that’s just for version 1.0. The roadmap for 2.0 looks even more exciting. 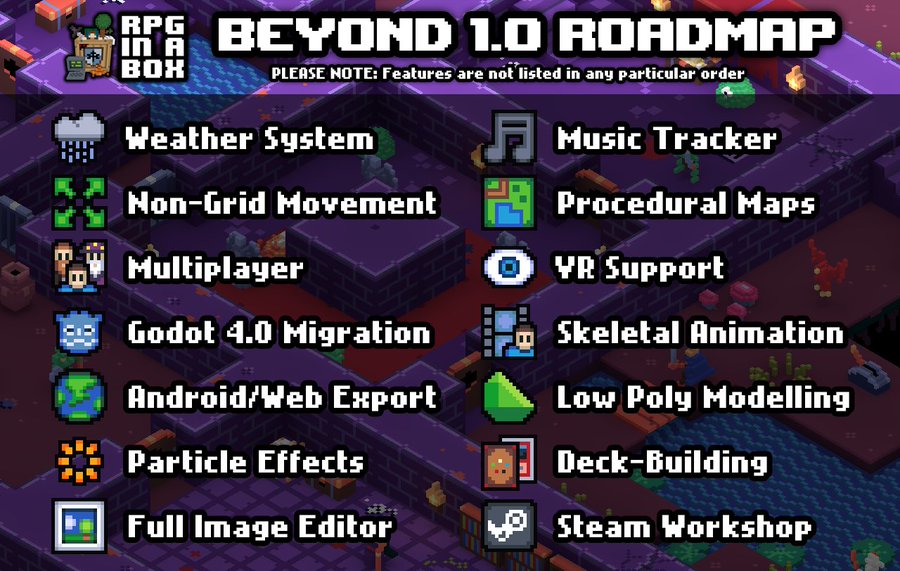 “Really excited for the Effect Editor’s first release! Fire, water, rain, snow, blood, sand, magic portals – all kinds of neat effects will be possible! What sorts of presets would you like to see?”
– RPG in a Box on Twitter

It’s also important to highlight how welcoming RPG in a Box is for children. There are absolutely not enough tools that fill that gap, and I think it’s beautiful to hear how kids enjoy it. It’s similar to Minecraft! That’s it. That’s all you need to say.
In this case, it lets kids build and distribute their own games too, without creations being restricted to any arbritrary walled-off ecosystem. There’s a level of ethical concerns that should be noted when looking at environments like Roblox or Minecraft, where creating content can easily become a type of “free labor”.
Game tools like RPG in a Box are the oposite of that. I will always root for them because of this core principle.
It’s one of those tools that I hope more educational institutes discover because it occupies that creative space so perfectly… Being educational, a good introduction to game building, AND maintaining a level of flexibility that lends itself well to growth. 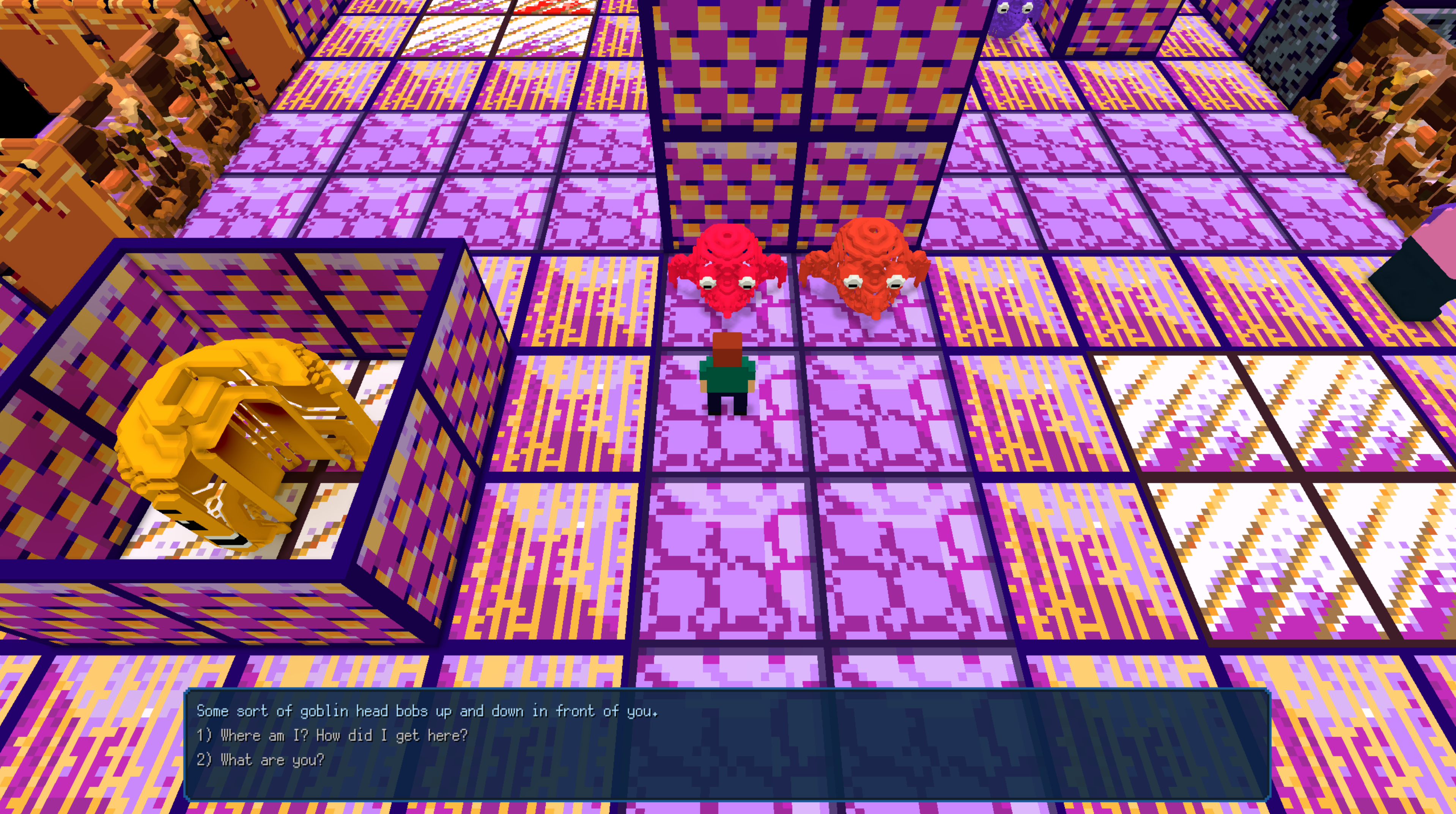 * Toyland Task
“This was a small project as an excuse to get back into game design, and to experiment with voxels.”

I was over the moon when I saw Tim Sweeney (of Epic) Tweeting about it. His take captures perfectly why such tools are important. 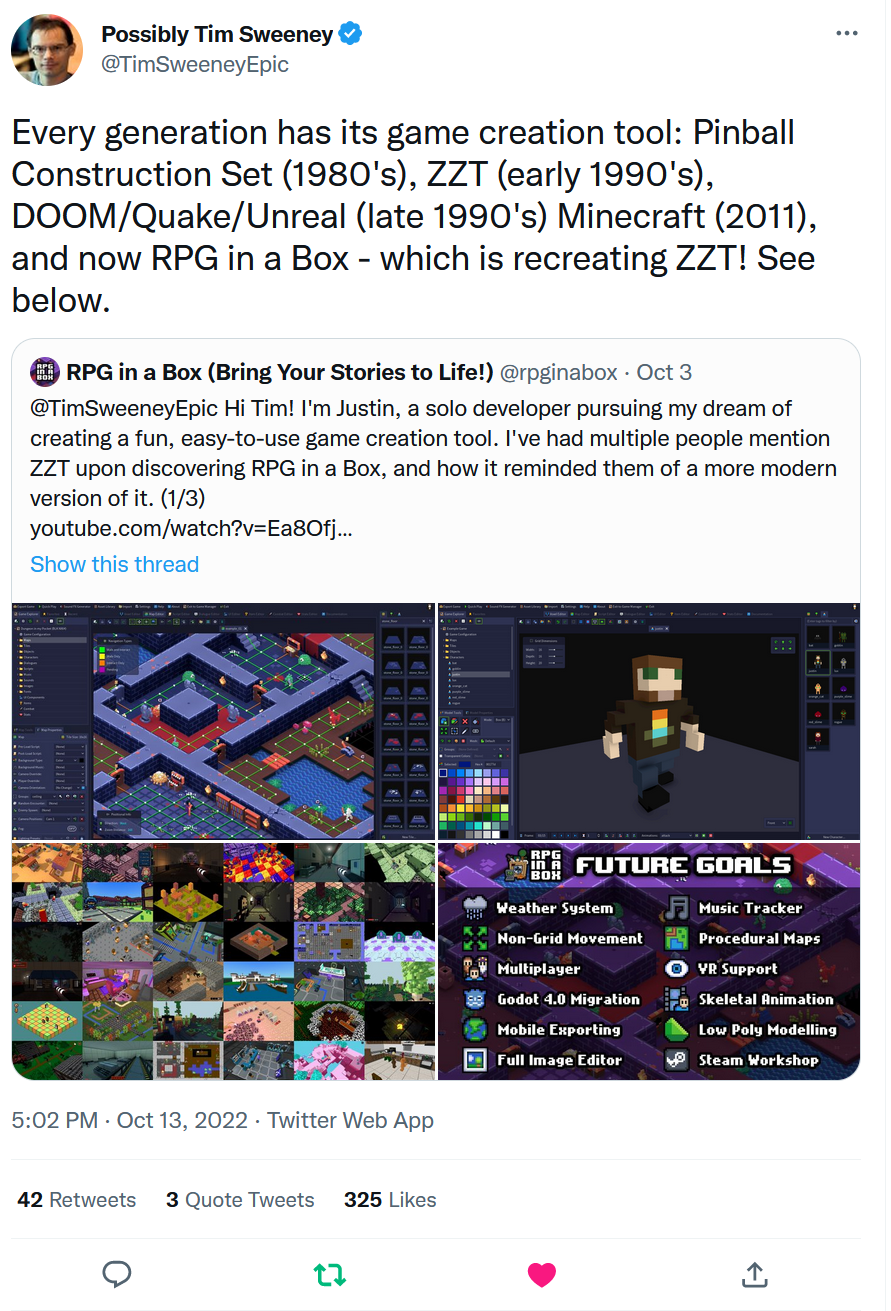 “There’s magic in having a game creation tool that’s as easy to use as playing a game and accessible to anyone of any age, with minutes from first use to playing something simple. Unreal, Unity, and Godot require quite a lot of time investment in comparison.”
– Tim Sweeney

I have to add that I think I’m fairly informed as to what game development tools are out there. I do my absolute best to know as much about that space as I can, and I can’t stress enough how special RPG in a Box is. It’s the type of tool that you cannot take for granted. It maintains being “accessible to any age” while empowering a large variety of styles and scope… especially in terms of the types of games you can make in it. To me, it is among the most exciting things happening in the game tool space right now.

I’m over the moon that it got picked up like this… and is, for a limited time, exclusively on the Epic Games Store.
Be sure to grab it (free for a limited time) December 1st through December 8th, 11am to 11am ET… so you get to experience it for yourself.

The RPG in a Box community is a welcoming one. If you are aiming to build something in it, there are a number of tutorials or resources to help you get started.
NerdyPunkDev recently posted this tutorial on Youtube. It is a great overview of the tool!

All that said, I could keep on talking about how great of a tool this is… but the work being made in it speaks for itself.
Browsing the #rpginabox tag on social media shows games ranging from first person experiences, to roguelikes, to atmospheric experiments.
In the unlikely event that it’s a question you might ask, yes, RPG in a Box can run Doom! …I mean, you can use it to make doom. All bets are off. It’s also an FPS in a Box. 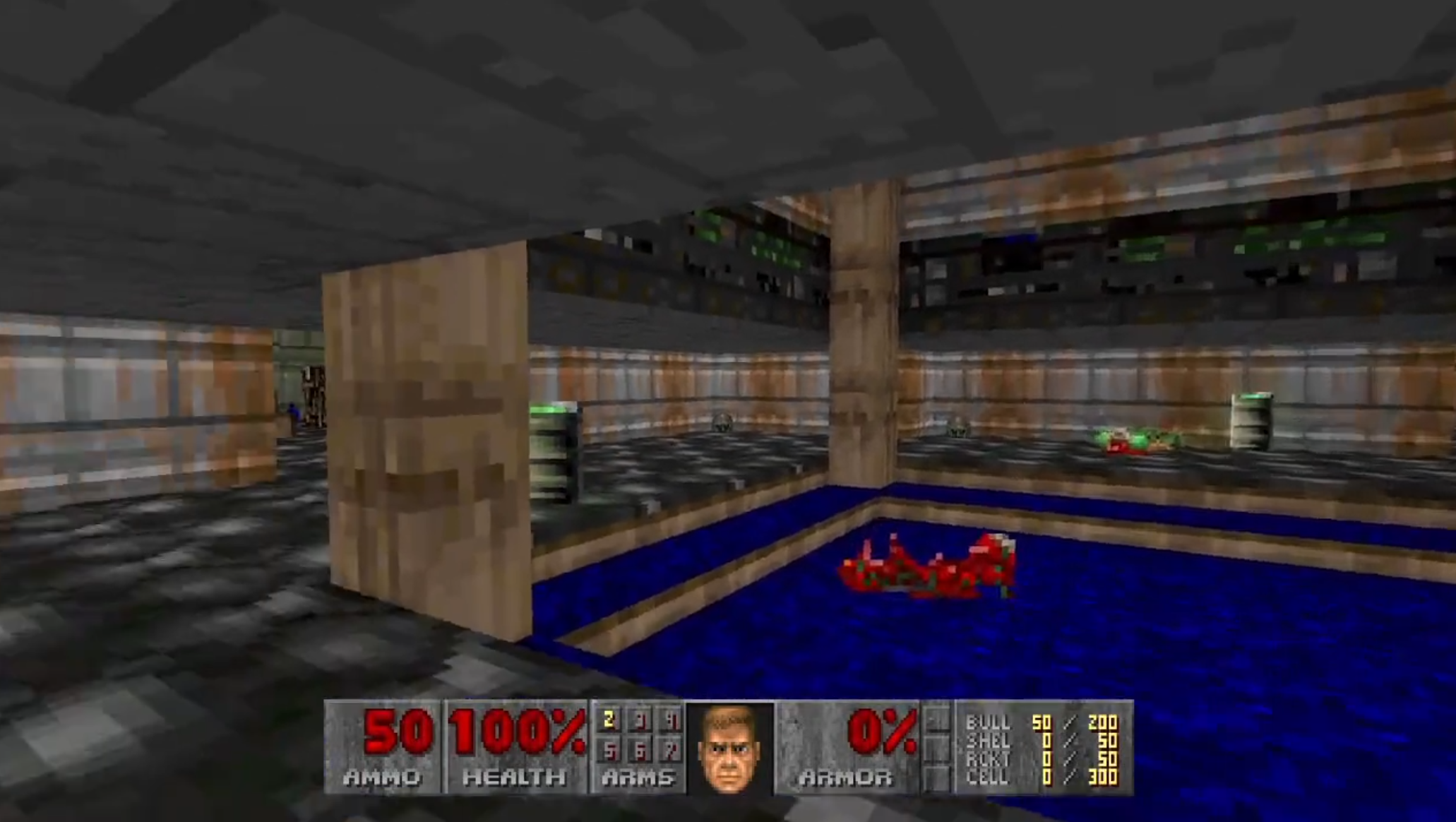 “DOOM, Shining Force, Ultima, ZZT…
What else do you want?
Jokes aside, all of these were inspirations for RPG in a Box in one way or another, and it was a joy to create these prototypes with it.”
– RPG in a Box Twitter

Projects like Inmortui Demo highlight the level of quality attainable in it. Inmortui is a unique and unforgiving voxel first-person, isometric RPG set in a dark fantasy dungeon. 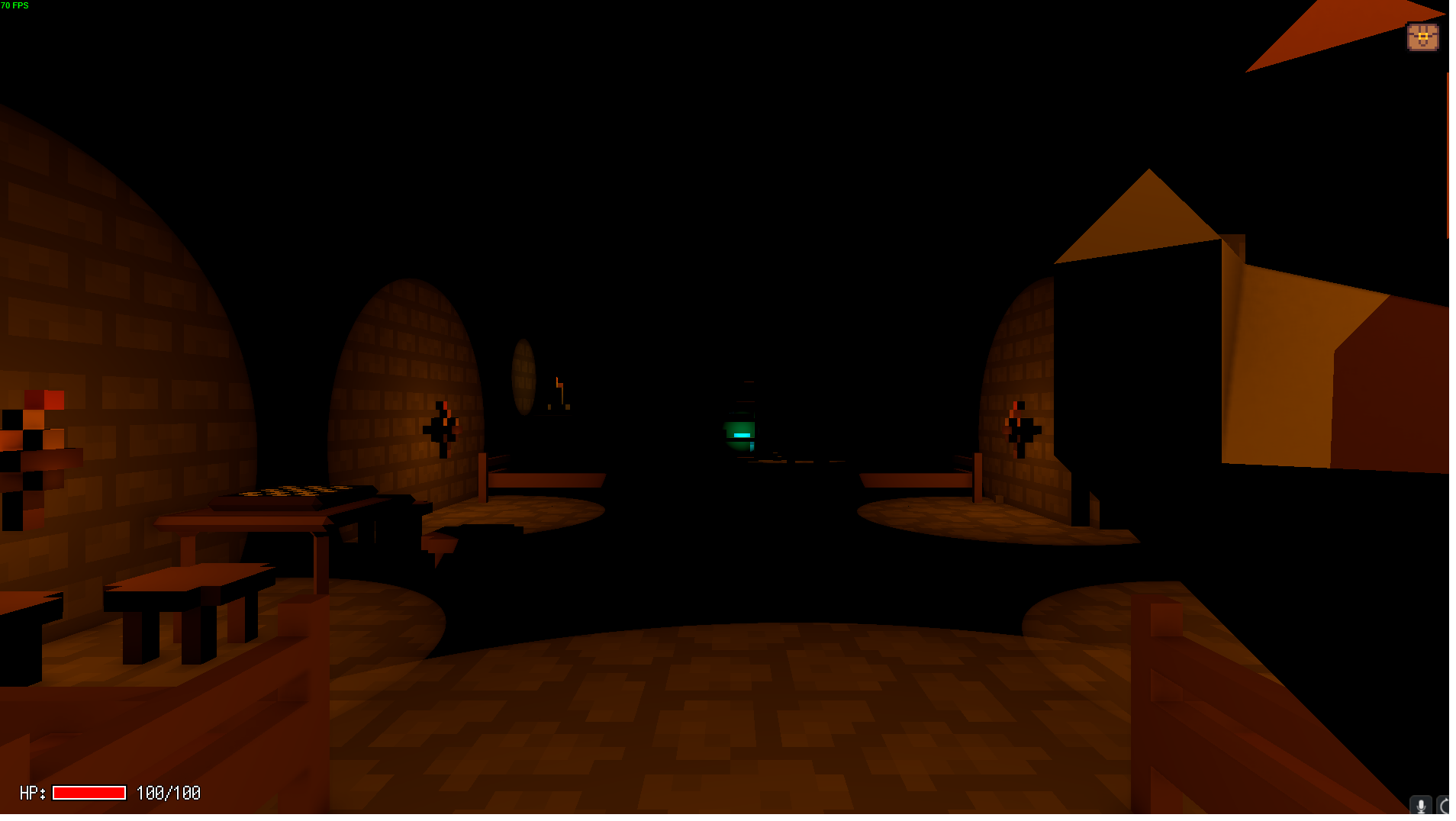 Even more elaborate first person projects being built in it, such as Tales of Stonehaven (see this Redit Thread) or Project Wasteland highlight the beautiful low-fi atmospheric voxel art that the tool affords. 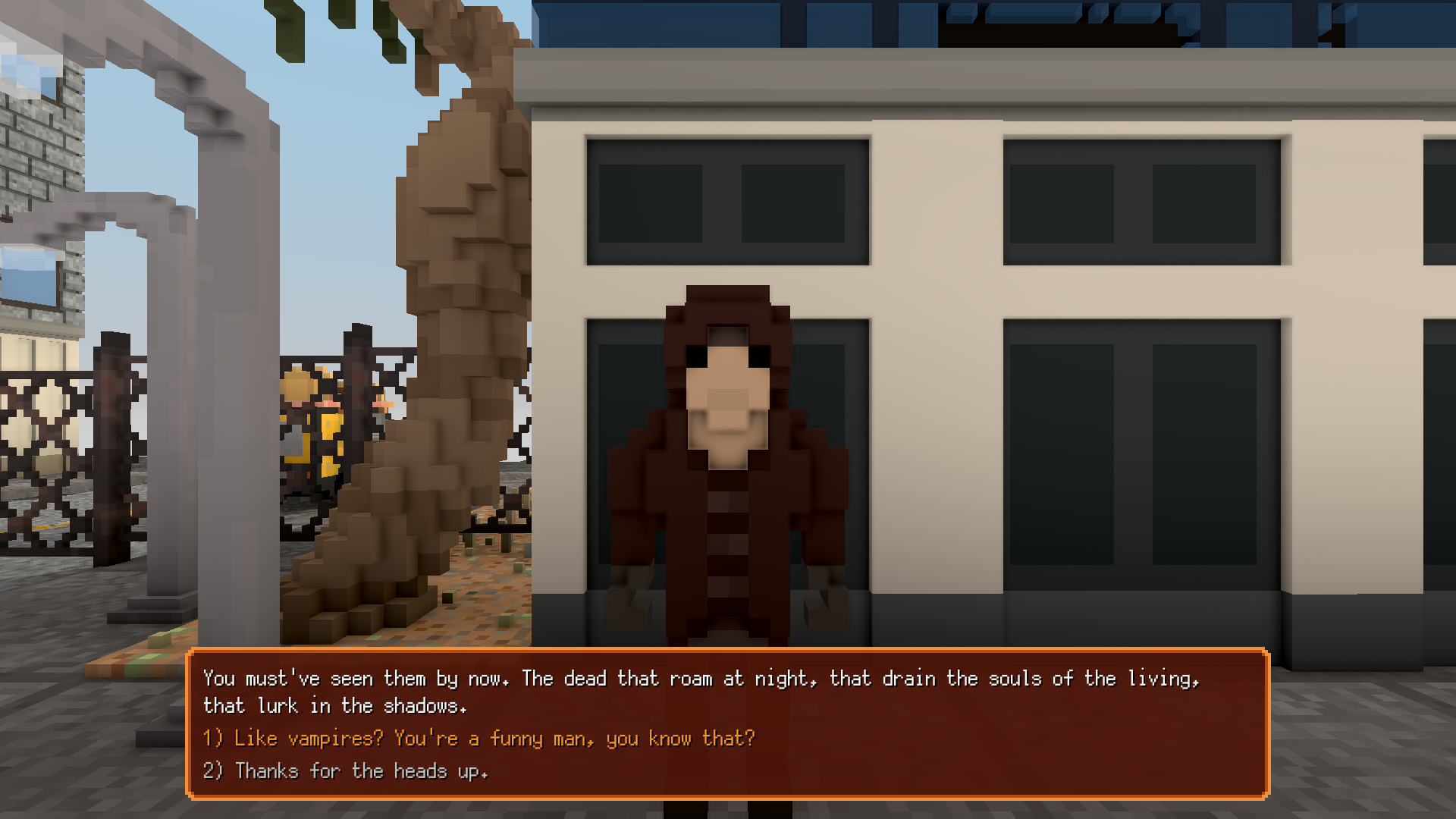 A Road to Awe is an exceptional example. An atmospheric walking sim of 365 levels! I knew of it before I knew about RPG in a Box. 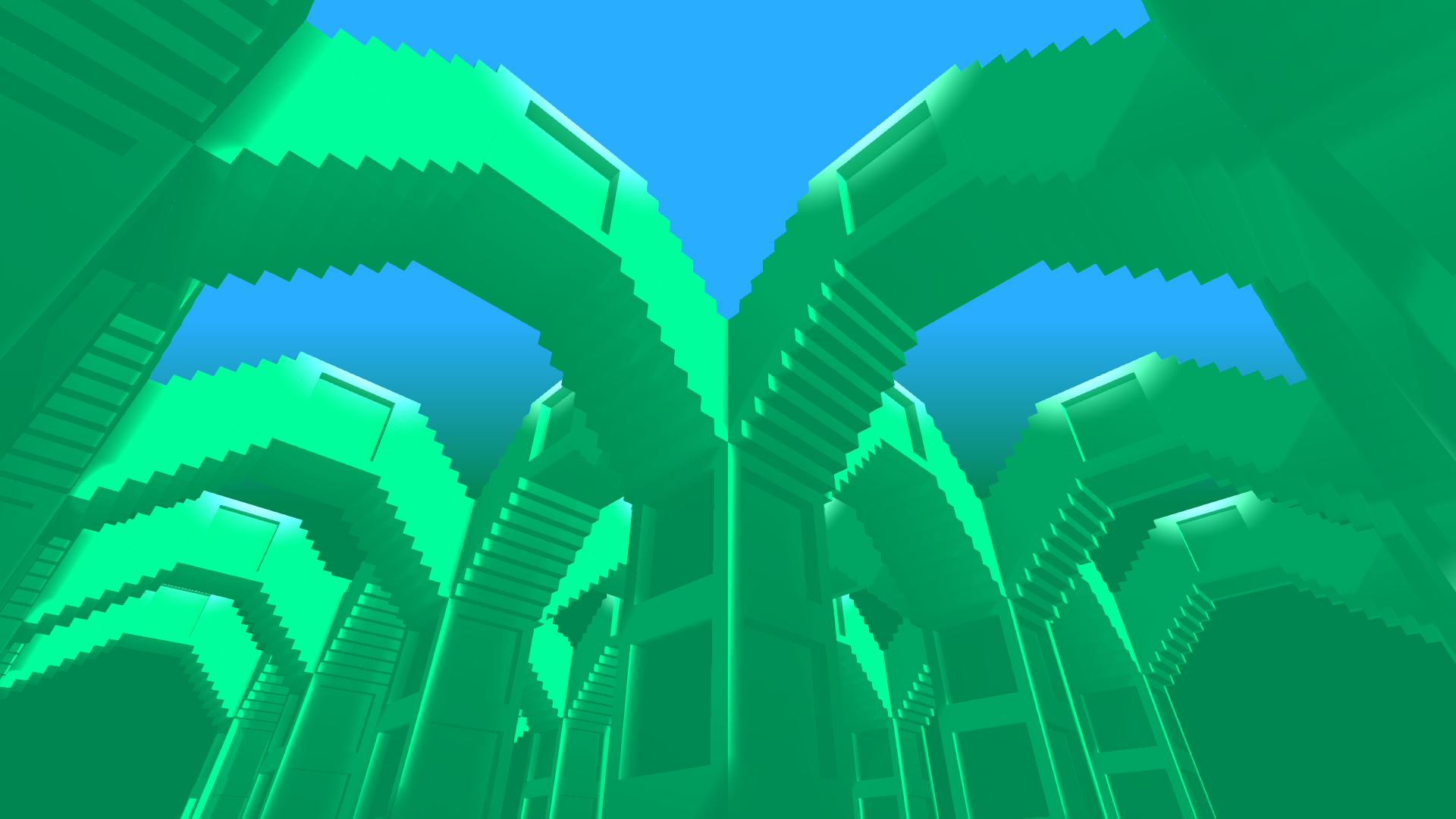 * A Road to Awe
“A Road to Awe is a kind of intimate year-long game jam, with a focus on level design and ambient music. The game itself offers a contemplative first-person experience. You simply walk the road, one day at a time, wondering what comes next.”

How well a tool lends itself to building walking simulators speaks volumes about the offerings of said tool. Whatever your opinion on that genre might be, I think relying just on space to be enough to exist in a video game demonstrates the importance that imersiveness holds over this medium. If a tool supports that well, then it’s a good sign of what the tool can do for games of a more traditional nature. 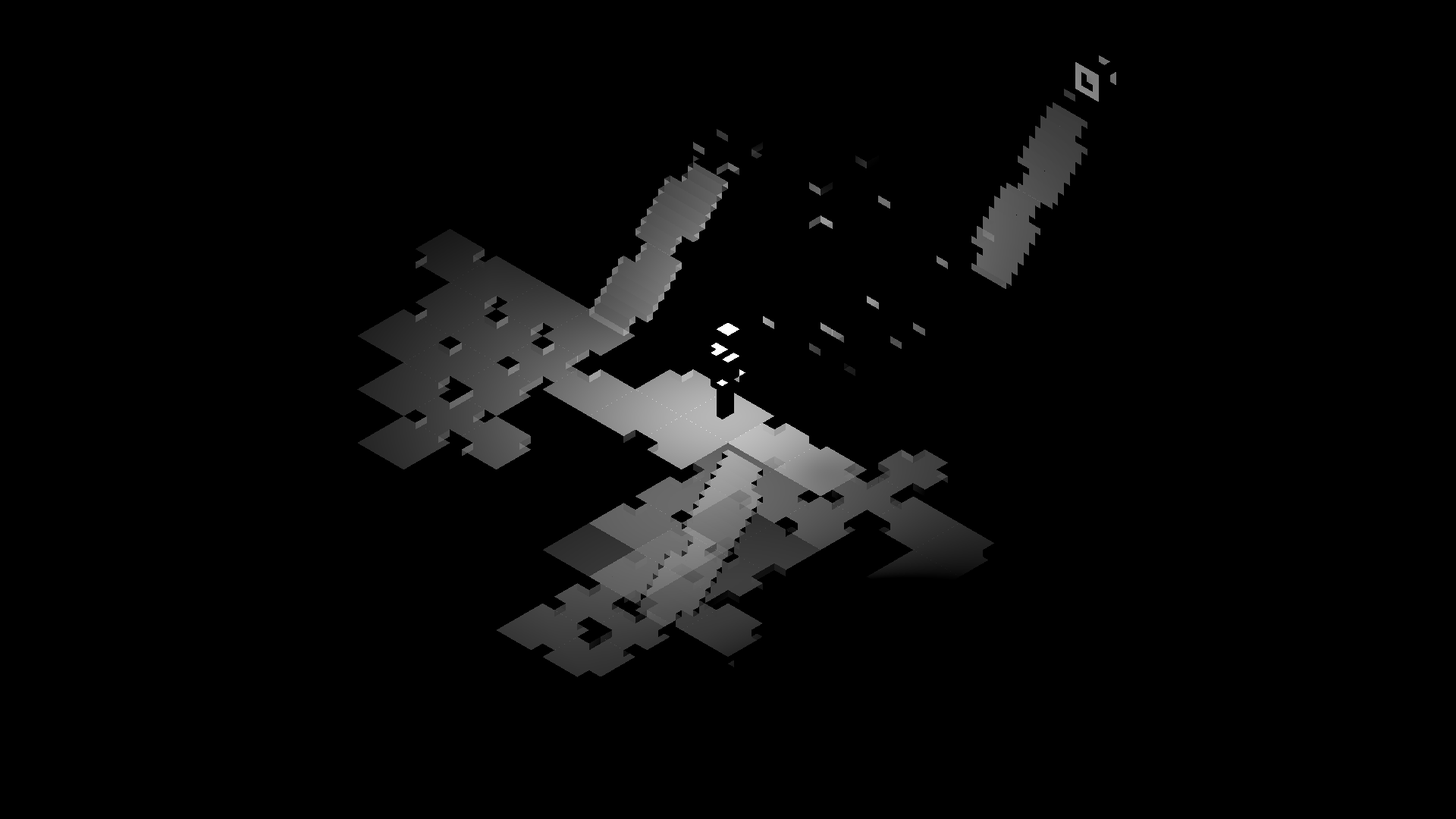 Worth also checking out is Oracles, a “modern day divination device based on algorithms nobody understands, especially not the author.” I remember playing this a long time ago and loving it. It’s this beautiful strange device that you can explore, encountering words that you ascribe meaning to, forging what seems random paths from either meaning or meaninglessness. You decide. 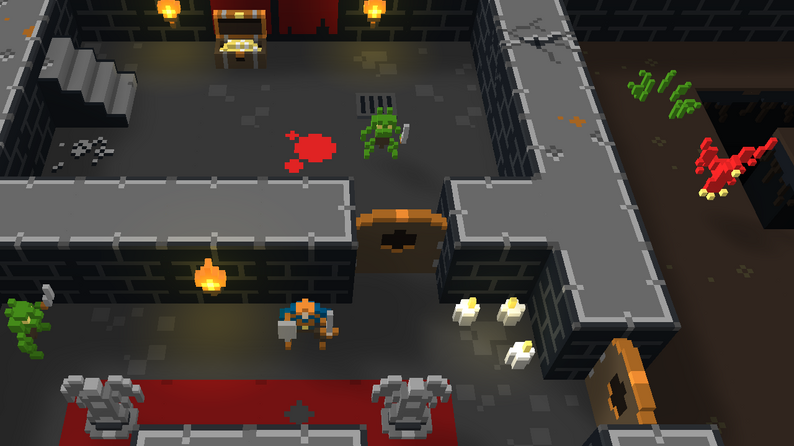 The low-fi aesthetic and variety of ways that you can play an RPG in a Box game makes checking out what people made in it as delightful as playing random Bitsy games. They are all unique bite sized experiences.
Back to Work, Pig is a first person jam game that you play with your keyboard (instead of using just your mouse which is more typical for RPG in a Box games). The game opens in front of a computer in a mysterious environment where it becomes obvious that you are forced to work, and eventually you escape by disassembling a vent in the bathroom… I love how novel the first person view feels in these.
Back to Work, Pig is a fun jam game worth checking out! 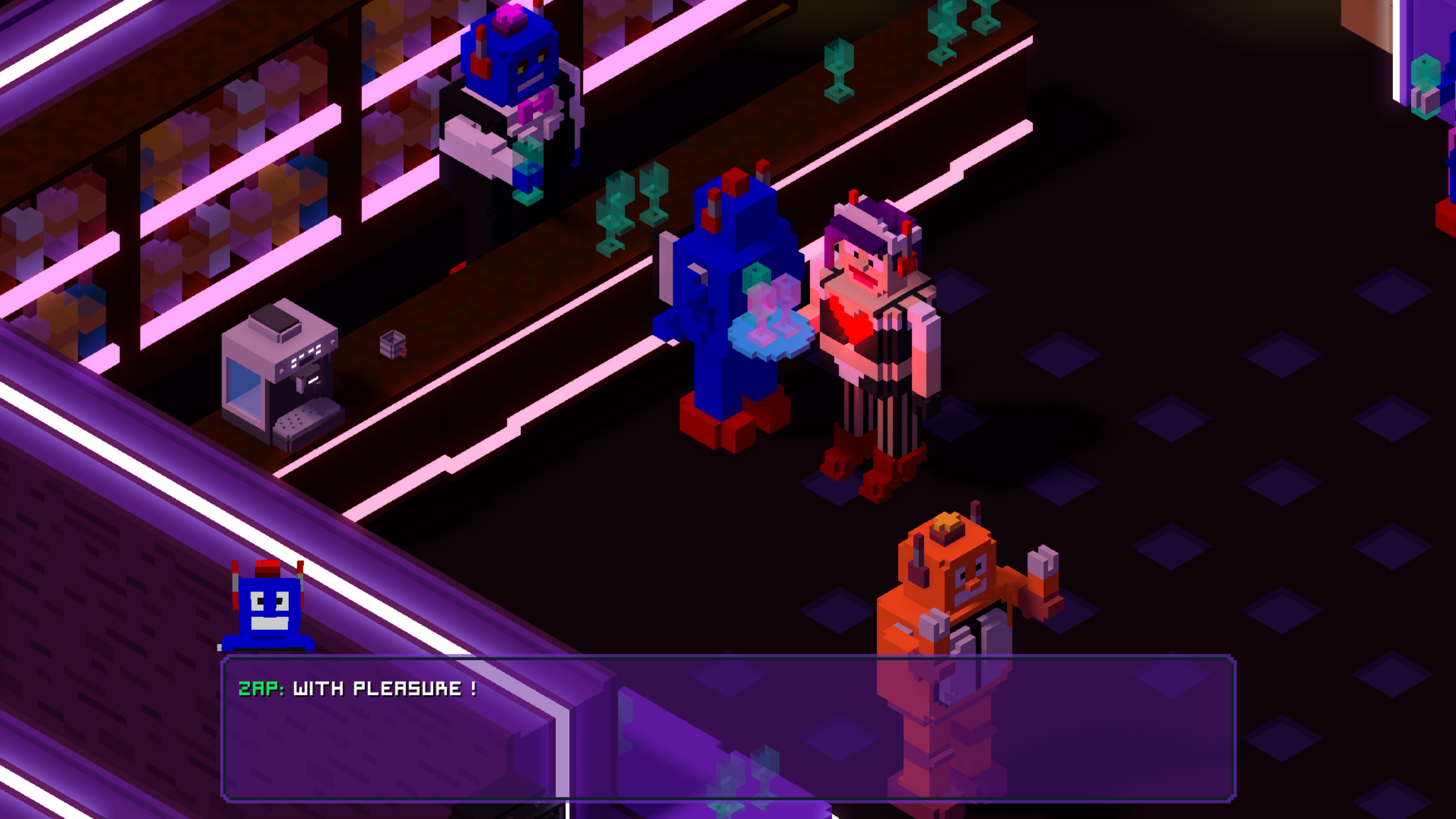 * Act Like Humans
“To celebrate summer, you decide to go to the trendiest club in town!”

So… All that said… I’m happy that this tool exists and that things have been working out for it. We need tools like RPG in a Box. We also need to support them so they can continue to exist.
Be sure to get RPG in a Box from the Epic Games Store where it will be free through December 1st to December 8th… If not then, well, just support the development of it by buying it on Steam or on that hometown of indie games itch.io!

In other personal news…
I’ve been heavily invested in making my current game (screenshot below). It is being built in Unreal this time. If you want to keep up with that development then follow me on Mastodon (or maybe Twitter, but I’m not sure about Twitter anymore). 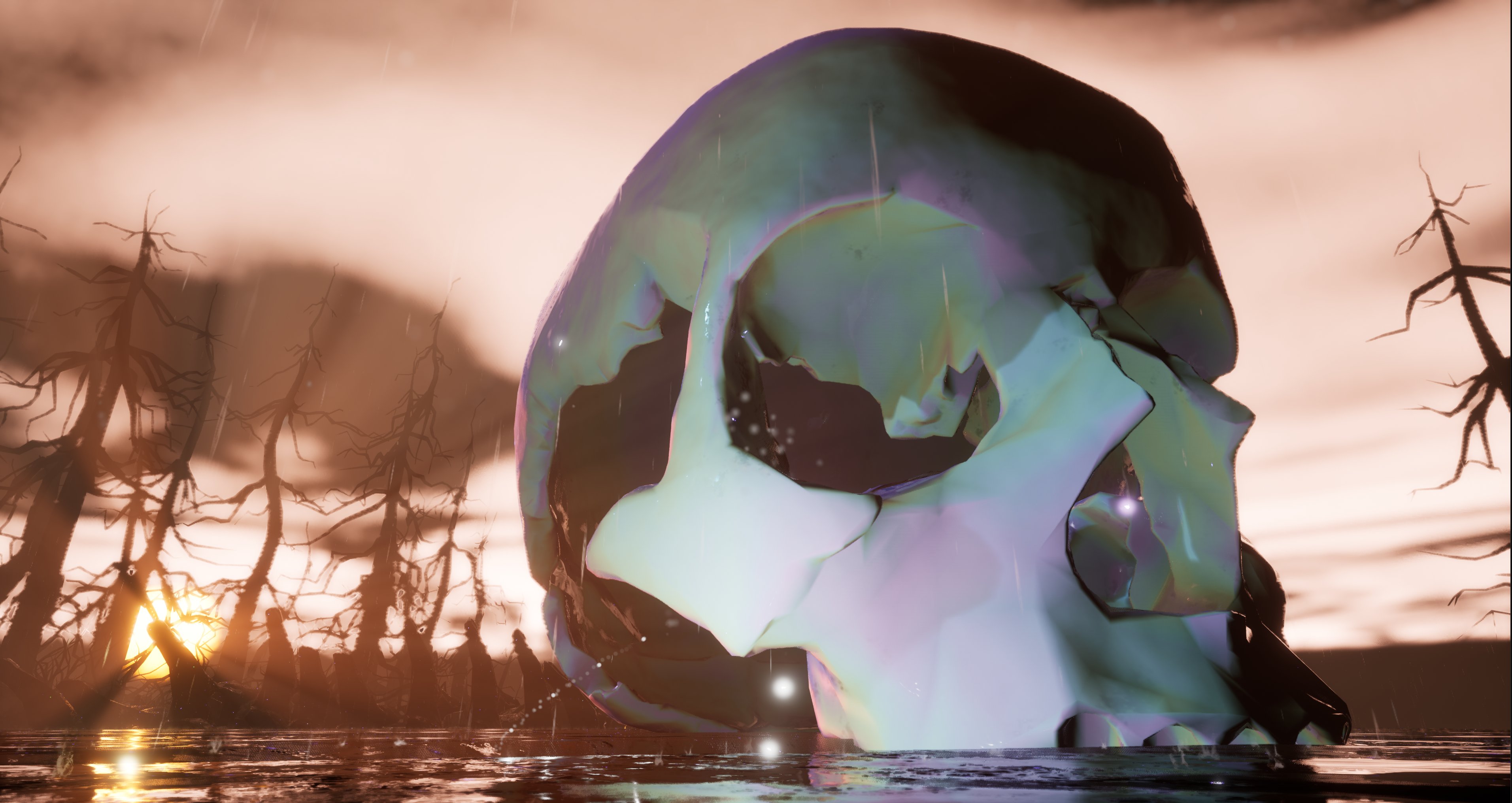