My little treat-myself-project is done!
I’m excited to share this with the world. 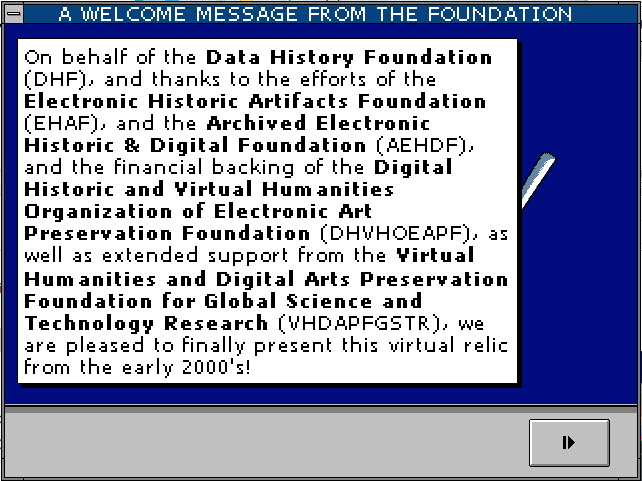 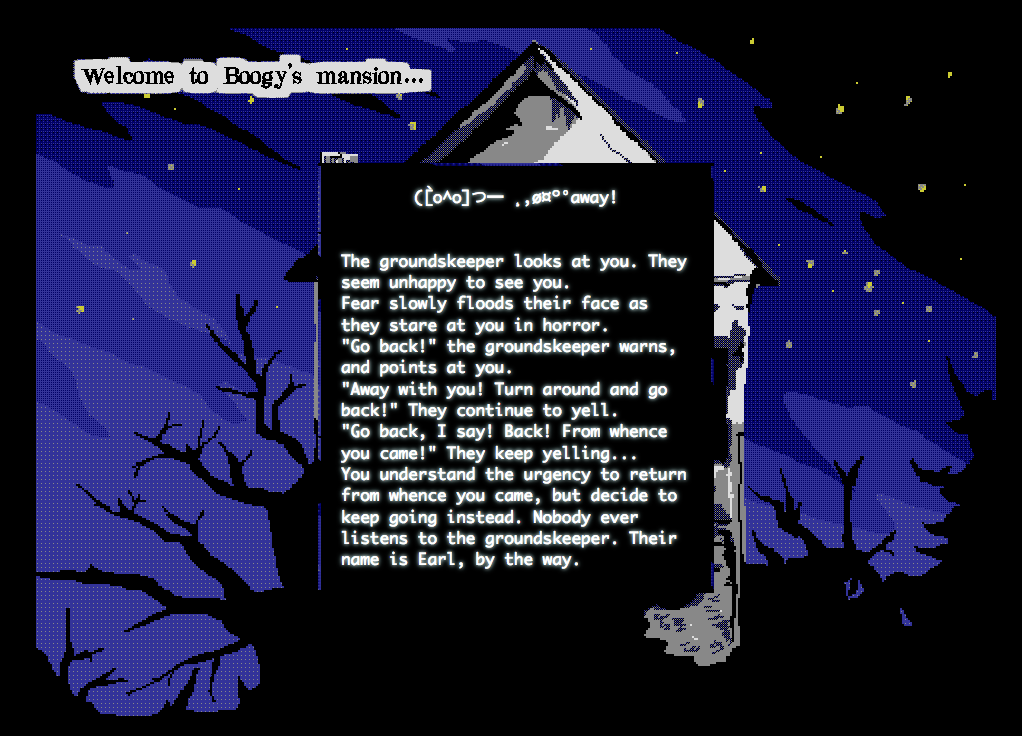 Cyberpet Graveyard features a little over 41 programs. That does not include html pages, or all the other things to find and look at and be amused by…

Basically it’s a collection of strange, goofy, software that you discover by rummaging around in folders.
The premise is a set of abandoned cyberpets. There aren’t THAT many of those, but what is charming about this is all the junk surrounding them.
There are a lot of .html pages that are kind of like little stories with characters you meet, dancing skeleton apps, a desktop karaoke app (that one’s my favorite because it’s so 2000’s meme)…
Tip: after you run a dancing skeleton app, paste into a text editor. You get a (very poorly formatted) ascii skeleton… So you get the idea. It’s a lot of stuff, and the focus is more on discovering strange silly things. 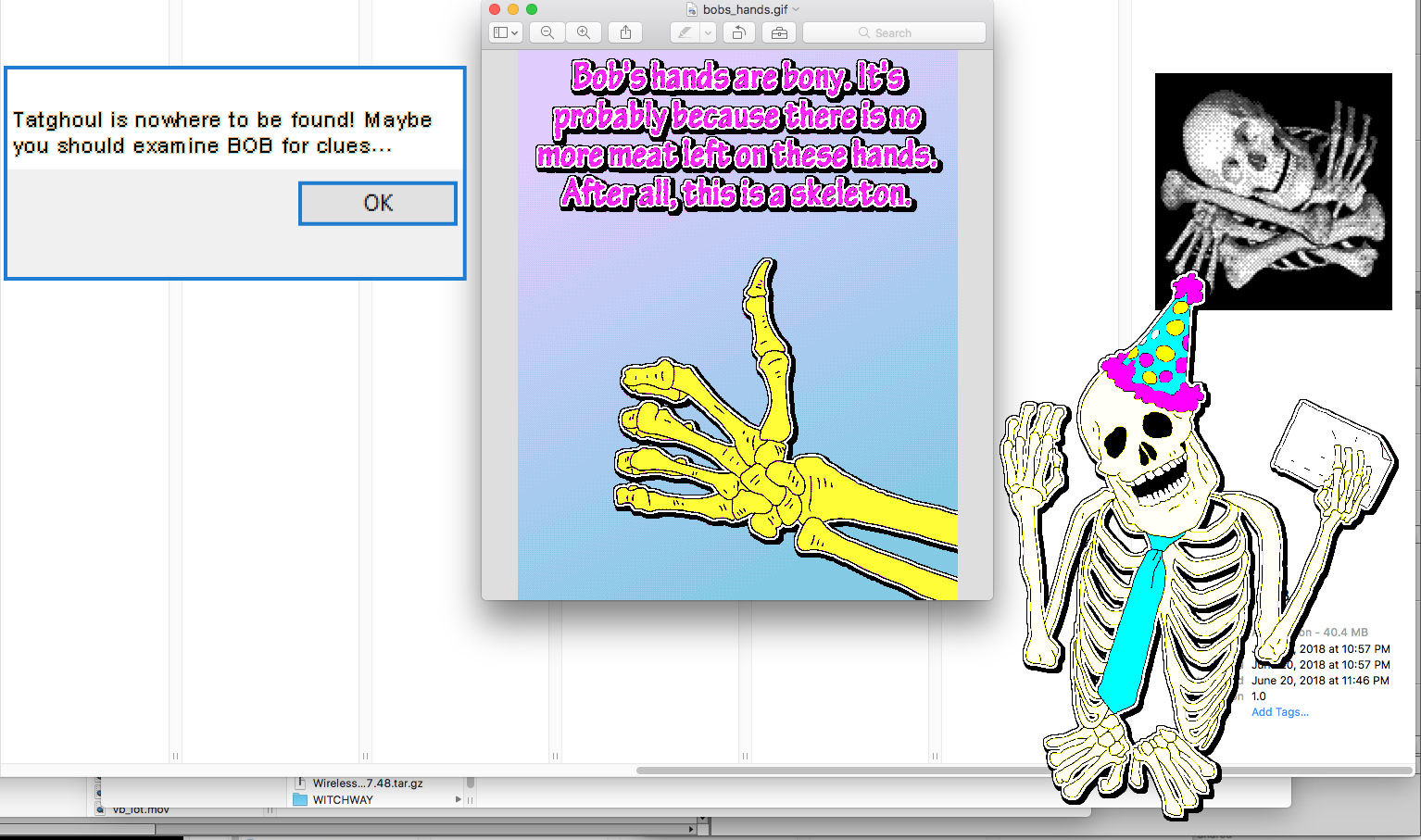 What I find charming about this project is the structure of the folders. They’re kind of “pretend environments”. Like you find a “cave” folder. There’s an image describing the cave, then you find inhabitants of the cave. The dungeon is fun, because the prisoner cohorts there are really silly quirky.

I like this because it’s kind of unrelated applications all with their own personality. They inhabit this series of folders. It’s interesting for how it treats software as a “character”, and works with a structure that you’re used to (folders).
It does have a story you can find. If you interact with some of the cyberpets (in the actual graveyard), they’ll slowly hand you cries for help, or other things, where you piece together what might have happened, and led to their creation.

Overall, it’s a cute little project. The point is entirely about discovery, and mulling around.
Interestingly enough my favorite part is a_country_road, rather than the graveyard. 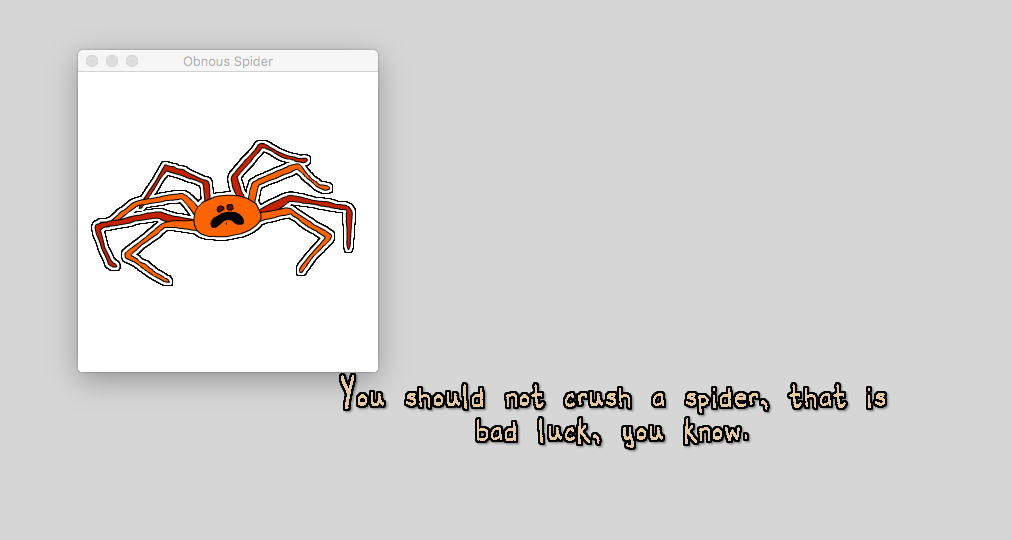 Ok, so something I learned after making this (that might help others, so you don’t encounter the same problems)…

The “country road” set of folders was supposed to be packaged together with BOOGY. That broke pretty spectacularly in Windows.
If you nest too many folders, whatever is in that folder breaks and doesn’t run. If you zip that up, then (when you’re un-zipping it), files in those deeply nested folders get lost. So, overall, the idea of folders-as-chose-your-adventure is a bad idea. Not stable. Will break (only in Windows).

I had to compromise and put “country road” as an alternative option at the beginning. Instead of entering the graveyard, you can go there… which is cute.

So… I mean, overall, this is not a stable idea.

I didn’t have trouble packaging 41 different apps, so that works. The delivery is just not stable. 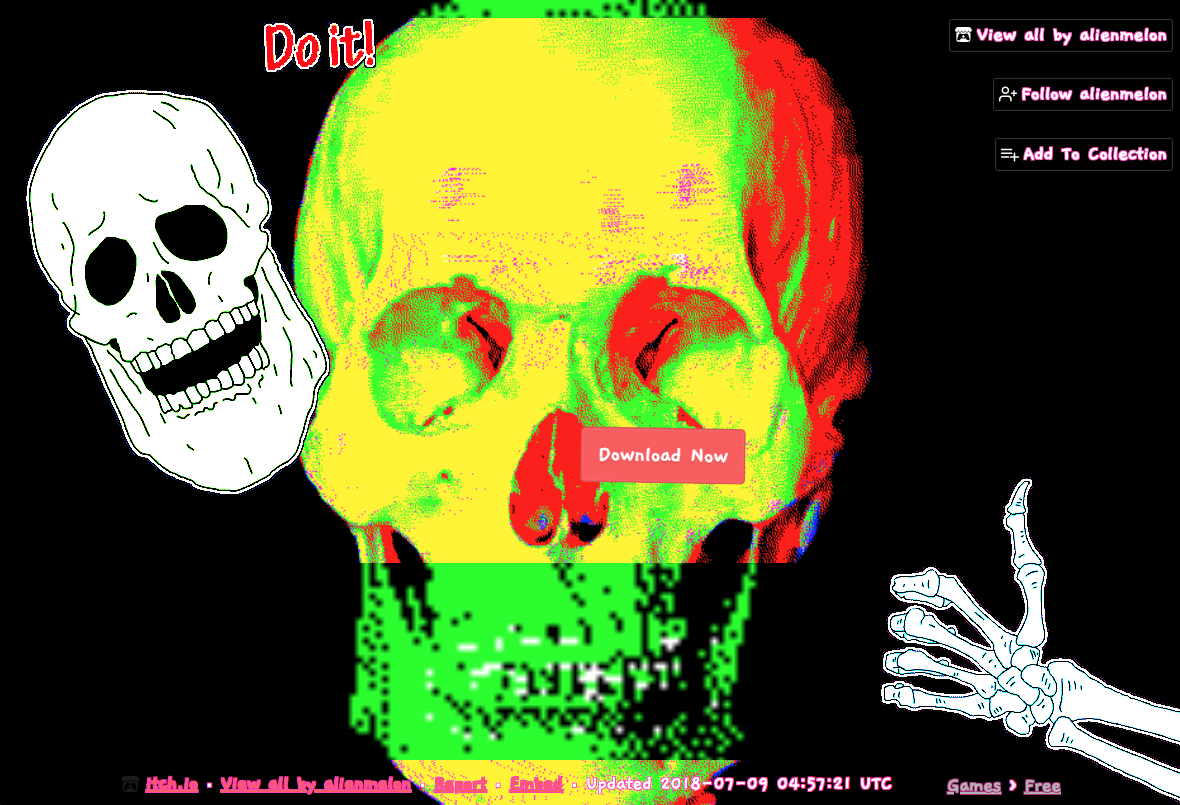 Cyberpet Graveyard also has a very fancy itch page… Actually, it’s only “very fancy” insofar that this poor page is supper hacked apart in order to get it to look like this.
I try to do something unique with every itch page, because the css feature is charming.
lol it’s so hard tho to get an itch page to work against how an itch page is built to look. I’m kind of proud of this one because it actually worked.
The skeleton hand is actually the header image. I had to sacrifice the game description to get the skull in there… It’s fun doing this just for how out of the box you have to think to get these to work.
This has become part of the fun of releasing something.
Itch gets a fun page, and GameJolt gets a fancy illustrated banner. I love both of these sites so much.

Oh also, interesting tip when you’re doing up your itch page with custom css…
To be able to get more assets (images) for your css, you can do the following…

* Use either the “background” or “banner” upload area, and upload an image.
* Once uploaded, right click over the little thumbnail of the image that was just uploaded.
* Copy the image’s URL.
* Save that URL (you can use that for your CSS elements).
* Delete image after uploading. The URL will work. Image is now uploaded. You can upload something else and that image will still be available.

You can do this to upload an indefinite amount of images, backgrounds, and banners, to use in your CSS…

Surprisingly enough I’ve successfully been doing this to get more image assets (like a custom cursor, or animated gif frames…). It works. It’s totally NOT ADVISABLE tho, because if they change something, it’s going to break every one of my pages (ever), but I think it’s worth it. xD 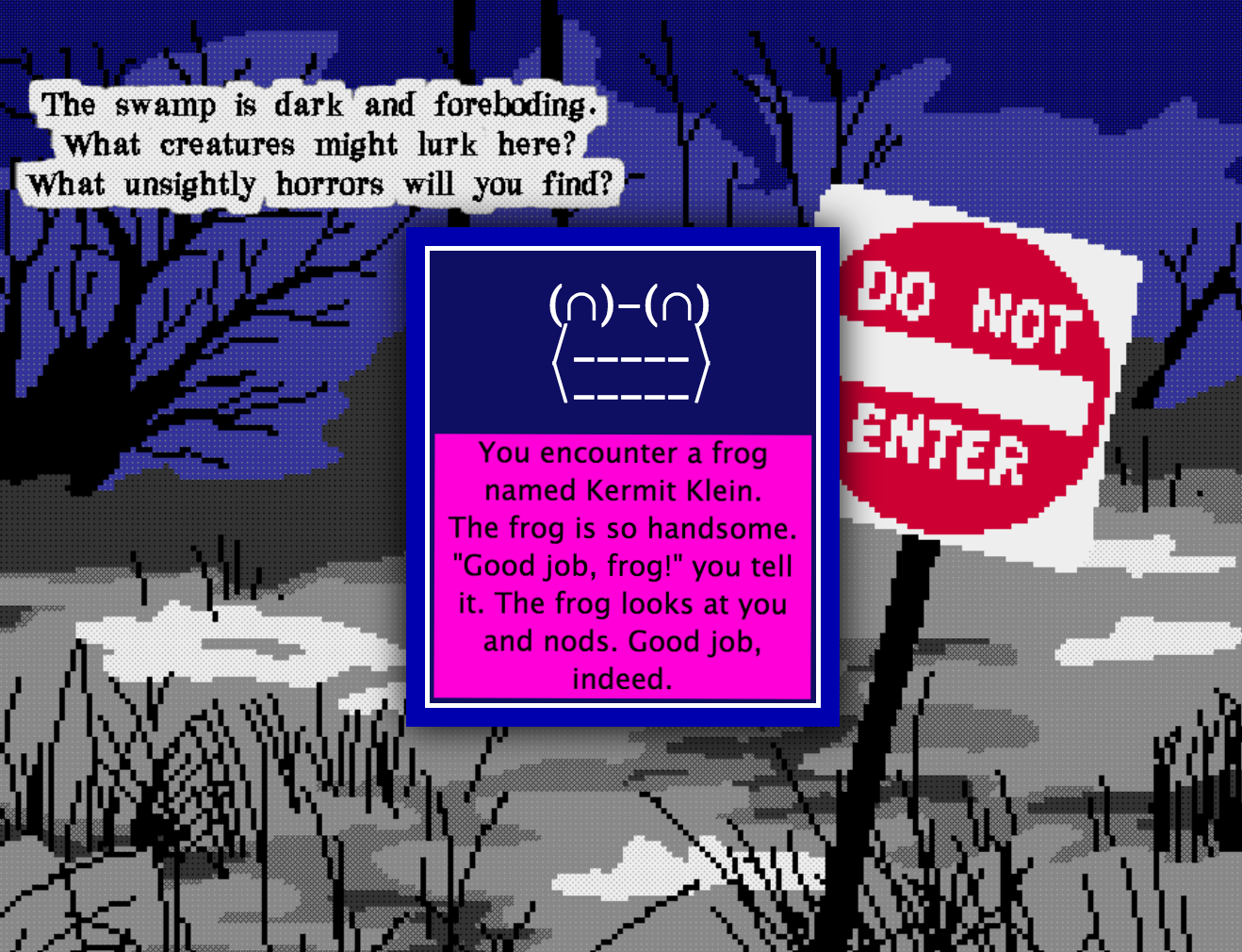 My next projects will be two separate collaborations with friends.
I’m collaborating with two different people!
Yay! I love them both and am very excited to see what happens.
I also want to be a good friend and give both collabs equal treatment. I hope it works.

One will be a “game” where you challenge a certain food item. Built around experimental music.

The other is about escaping and almost an interesting commentary on agency… I don’t want to say too much, so that’s as much as I’ll share.

Ok, I’m wishing myself luck. I want to be a good friend and do a good job on both of them.
I’m excited to see where these go!

After these I think I will be ready to pursue my dating game. I wanted to get more distance between myself and “Everything is going to be OK” before getting into that one, because that one will also be very personal, honest, open, and vulnerable… basically, a commentary on dating, love, and relationships, placed in a cute interactive cartoon world.
I think a good thing I learned, if you REALLY put yourself out there, and share way too many personal things in your art and kinda get shit/attacked for it… You do need distance between projects.
It will get to you if you keep this up, so breaking that pattern is a good idea. Give yourself a chance to heal, and recover, before jumping right back in.
You’ll also get better at managing emotional burnout caused by that. Completely unrelated silly projects, or collaborations, are a good way to heal.

So, ok. That’s all the news for now. Very excited about my collaborations! Yay!