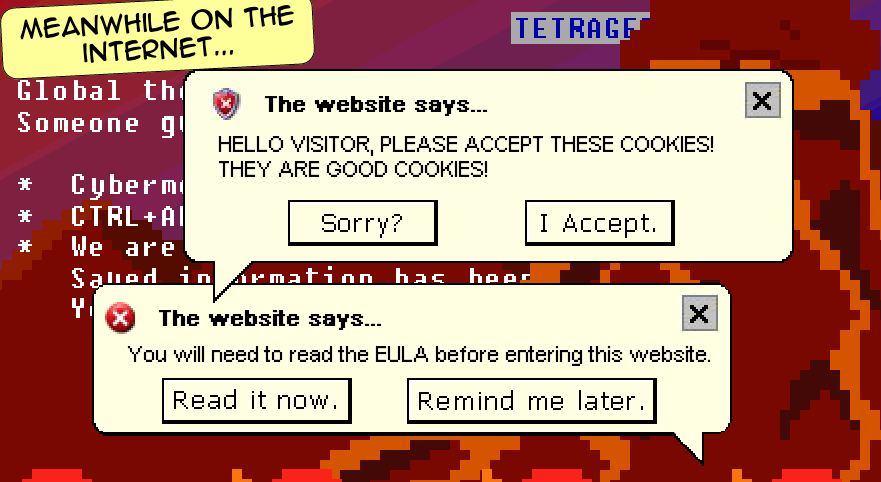 At the beginning of this year I relaunched a brand new Tetrageddon Games (the web version… not to be confused with ARMAGAD, the desktop version).
I did this because I waited till basically the absolute last minute to see if Flash emulators would be up to par to be able to run the games. The majority of these games are Actionscript 3 based. The ones that are Actionscript 2 based don’t run well on emulators yet… long story short, emulators aren’t really exactly ready yet.
So I went with the alternative plan of releasing all games as desktop apps, and rebuilding the site to accommodate a downloadable model for these games. 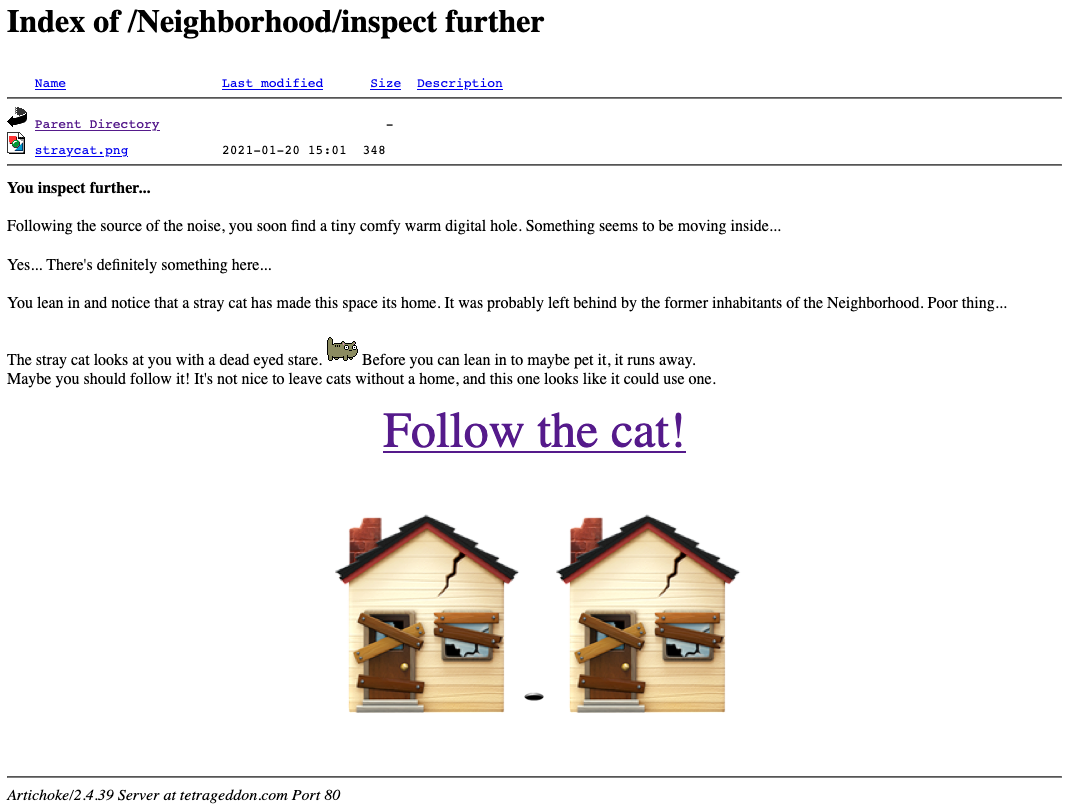 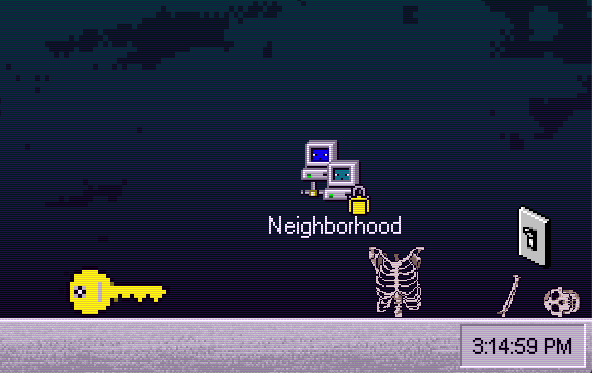 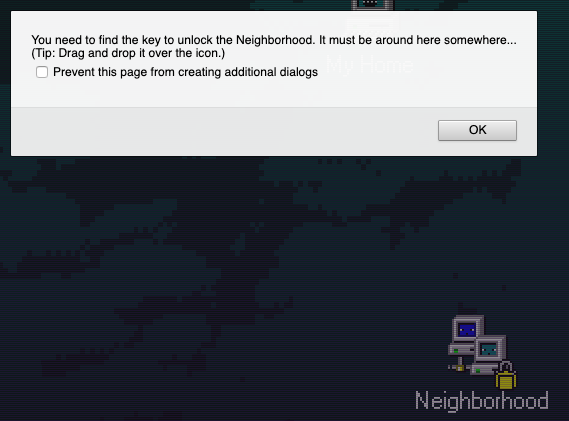 I wanted this version of Tetrageddon.com to stay different. Tetrageddon.com is about 12 years old now, probably older if you count how long it existed before I got the domain. It has always been a very unusual site. It’s been through a few iterations. This one is the one I’m most proud of because of how “gamelike” it is.
Originally (with the 2012 version), I wanted to do something like this, but never really had the time to do it properly. This iteration is pretty much my dream version.

The site functions as a “broken desktop haunted by skeletons of the past”. It’s the very same desktop that’s also hidden in EVERYTHING IS GOING TO BE OK.
The overall theme is that Cybermonkey has died. You can recycle Cybermonkey’s bones to appease the gatekeeper and get the password so you can unlock all the games.
It’s playful. There’s game-like elements to it. There’s also plenty to explore.

I think this version is interesting because the website functions as a game. You go get lost in all the tangents. Downloading the individual games is done in a game-like way where you need to go find them first. Things spread out from the site. You discover secret itch pages… 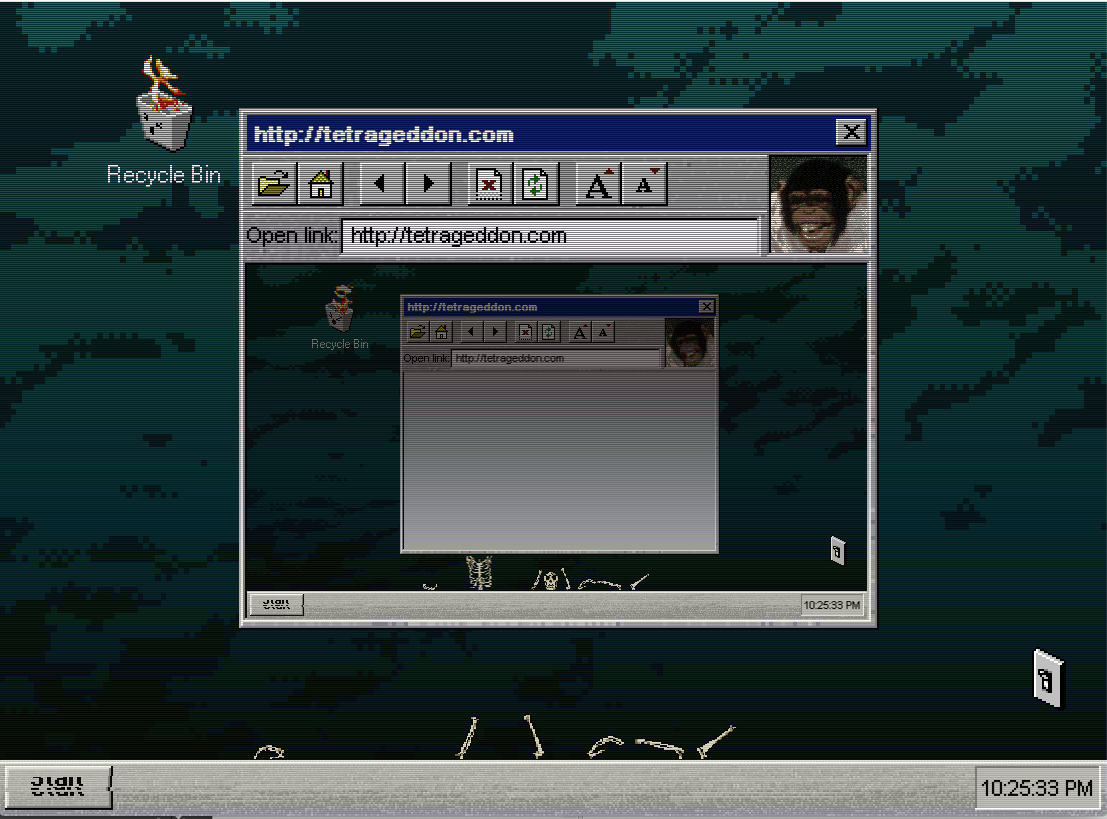 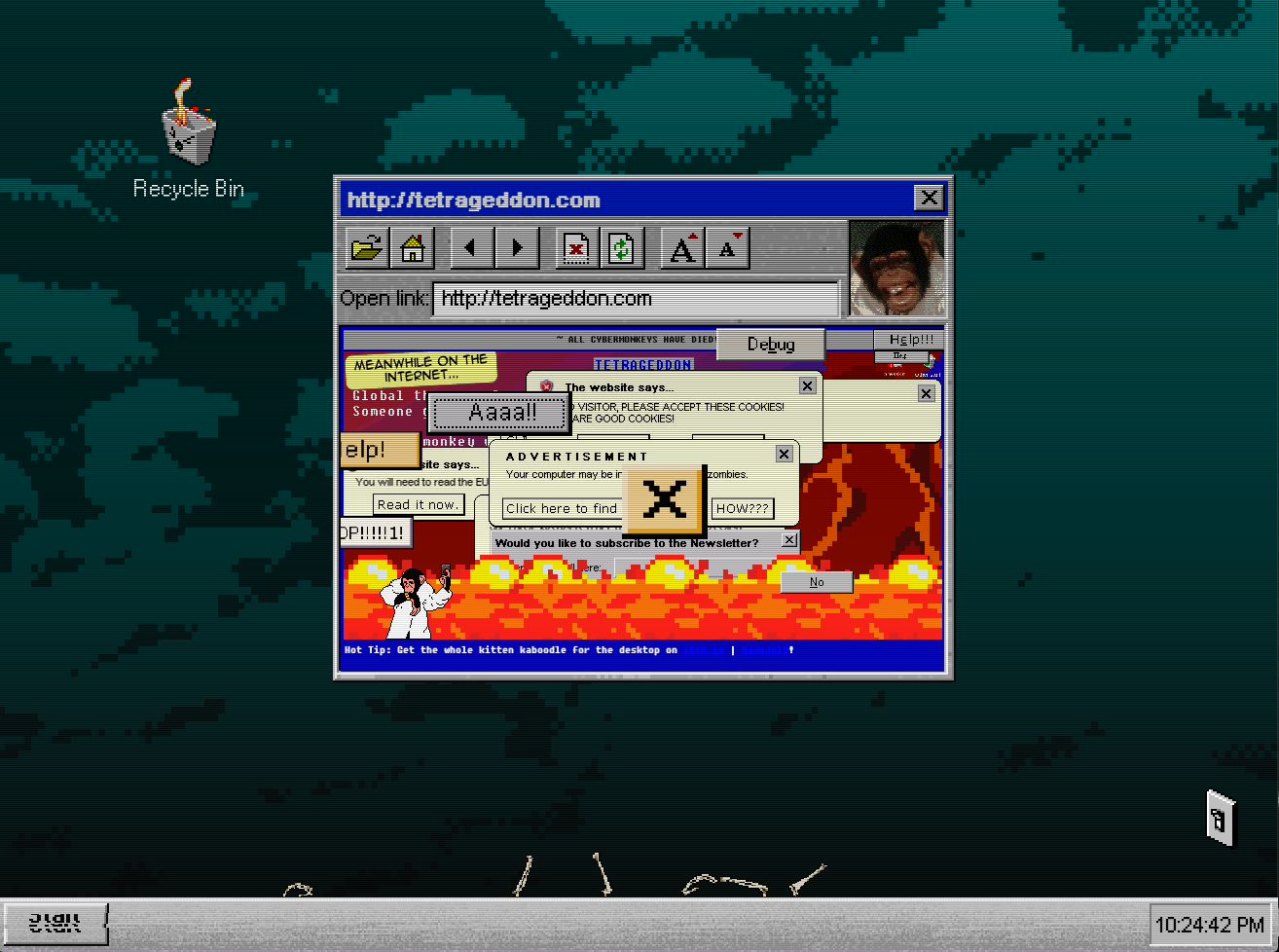 I feel like there’s quite a bit to it.

I have been INCREDIBLY burned out (physically and emotionally) so doing this took longer than it should have. I could have had it done a lot sooner but… wow the global pandemic is kind of taking it’s toll. I really miss people.
It’s been therapeutic to finally get this out there because the website being “broke” (due to the death of the Flash Player, and the games not being on mobile anymore) was hovering over me for quite some time. I didn’t want to let this project just “die” either. Re-inventing it was the coolest idea. I really love it. It holds a place of importance in my heart.

I do plan to do more with it. It’s built in a way where I could indefinitely add new tangents to it. I think it’s a lot more exciting and interesting than it ever could have been.

All the games, and the website, will be open sourced on github soon…ish. I’ll do this when I have a moment of free time, but right now the Electric Zine Maker needs my attention. When I do open source it, I’ll announce that on my Twitter.
I don’t think the source files to this will be particularly useful. It’s HTML5, CSS3, JavaScript, Tumult Hype, and Flash… but I guess interested people can salvage interesting bits from it maybe.

Ok so, that’s it! The brand new and exciting again Tetrageddon.com is here! Please go play it! Explore the Neighborhood! Release the Skeletons! Scream into the void!

If you enjoyed it please consider donating to my Ko-fi. 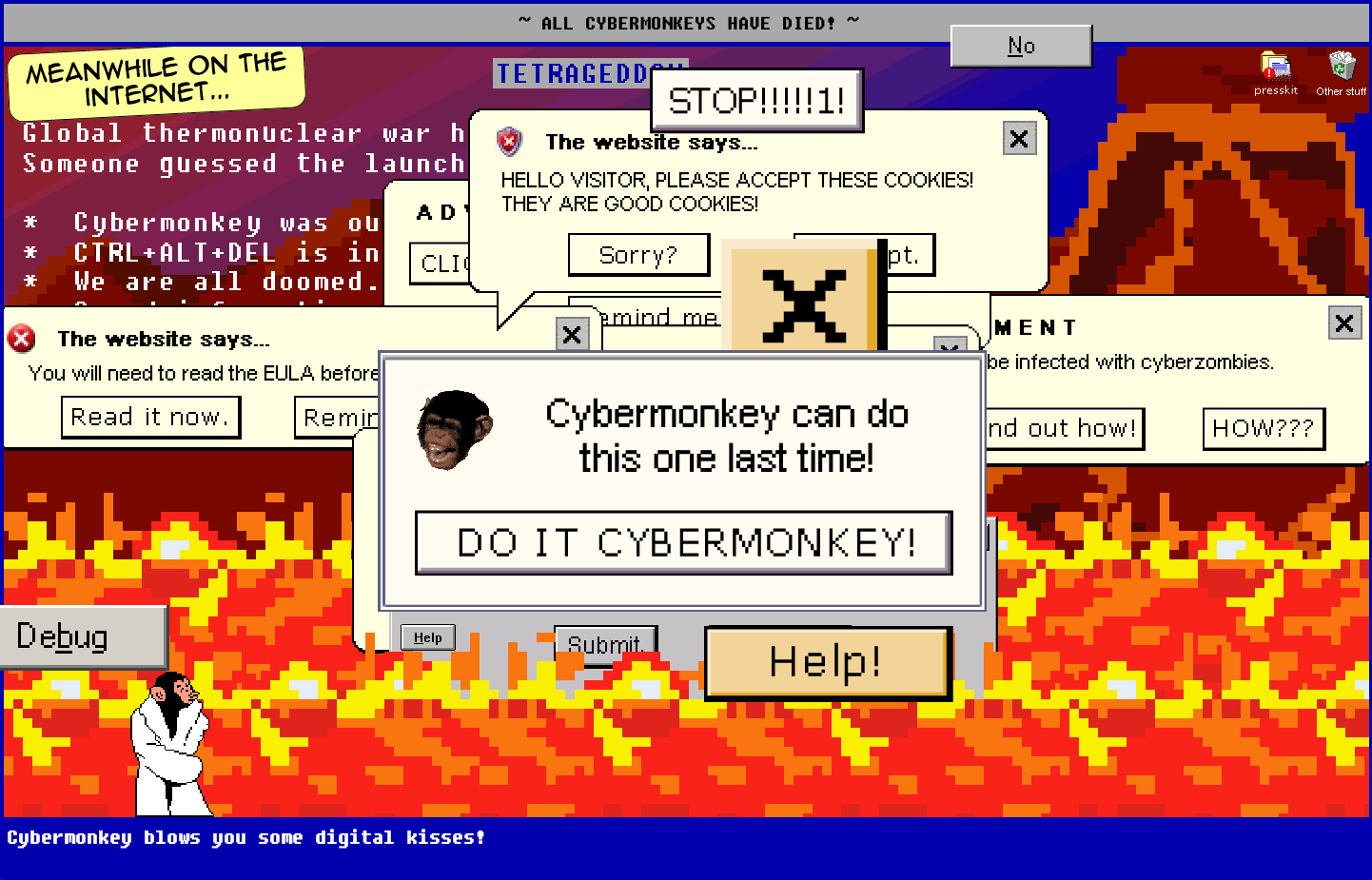 In December I released this little present. It’s a cute surprise. If you like desktop pets, then I think you’ll love this!

I’ve been asked a few times if I will be porting BlueSuburbia to run as a desktop app, or doing anything so it’s still playable after the death of Flash. For those that don’t know, this is BlueSuburbia:

In case you’re not familiar with it, here’s the description about it from the YouTube video: 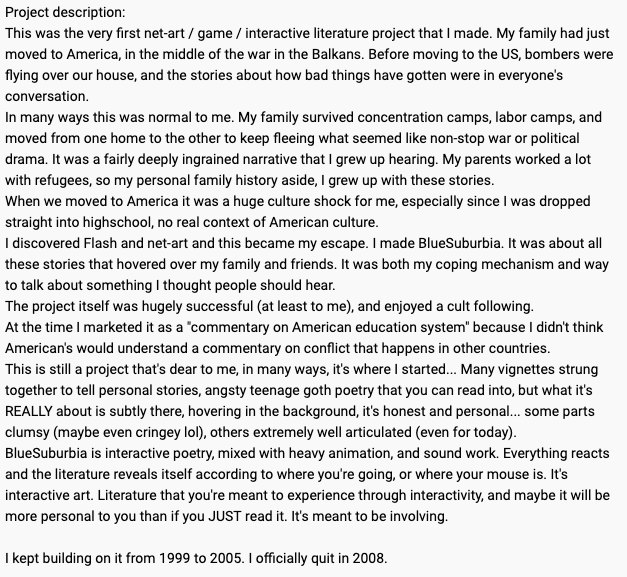 Long answer short: Yes.
Sometime this year I’ll port it to run as an AIR app. I’ll eventually release that on my itch.io page. I really don’t know when tho because there’s a lot of other stuff I need to do… but BlueSuburbia still has a lot in it that is important to me. I’ll definitely make an attempt to bring it back in some way or another.