This last GDC I was invited to participate in the Indie Soapbox. It’s a wonderful set of talks that happens every GDC in which each speaker is given five minutes to talk about anything they want.

I talked about desktop pets, desktop toys, and why that entire concept is such a valuable mode of expression.
I actually plan on writing a much longer, and more in-depth post about this (it might end up being a longer talk too), as soon as I have time… It’s a topic that has really grown on me because I think it offers so much creative independence, especially in terms of designing a game outside the confines of a windowed application.

You can watch the talk online for free (from the GDC Vault), here:

As per usual, following is the talk transcript… 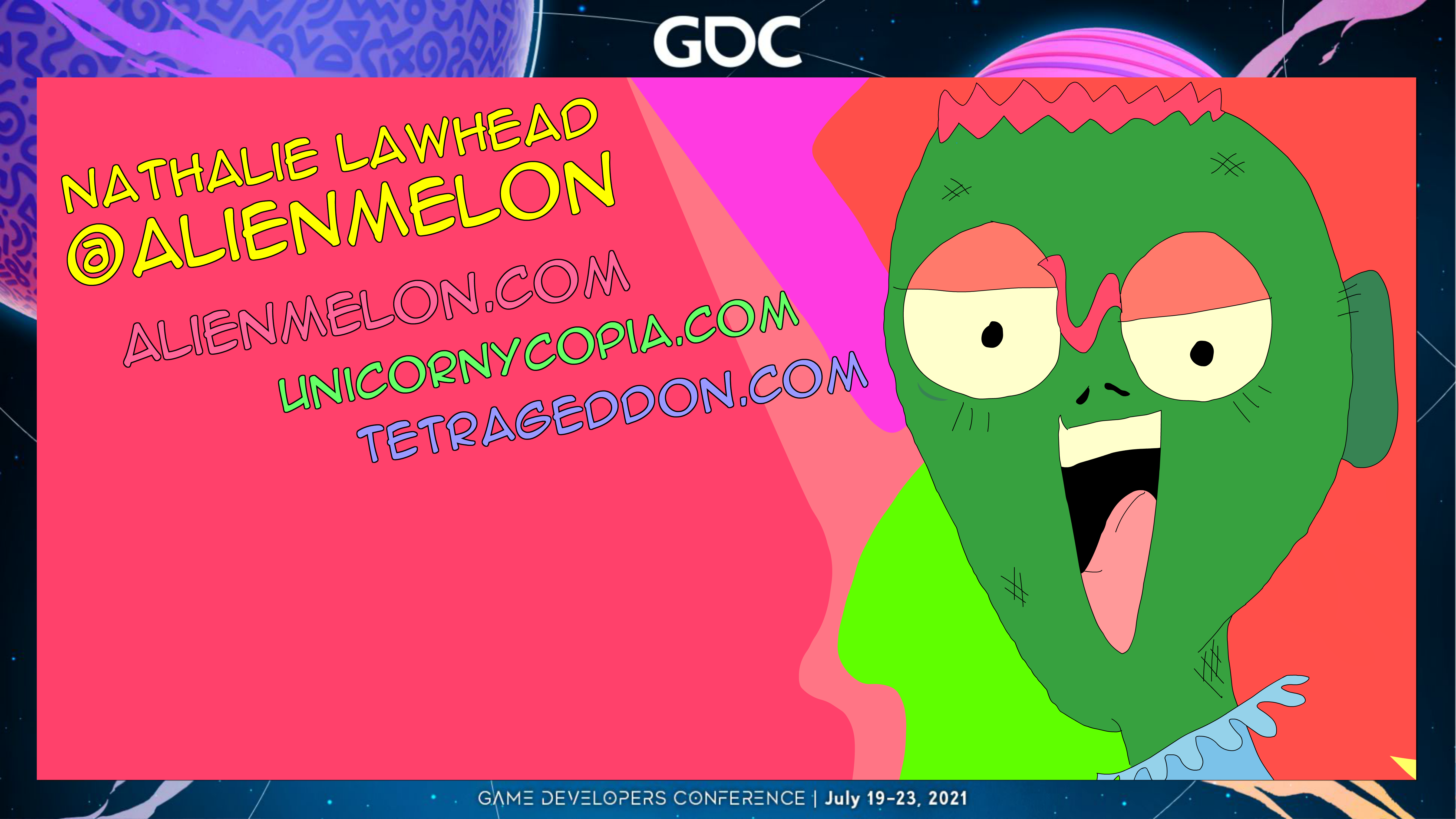 Hi everyone! My name is Nathalie and I go by alienmelon online and in my work.
I’m an experimental software developer, and game designer. I’ve been making things that today we call “art games” or “alt games” since the late 90’s.
Weird things on computers is the type of art that I live for!

I’m here today to talk about desktop pets and why you should be making them!
This is a very strange topic that I could probably fill a book with on how meaningful this type of weird computer thing is… I’ll try to convince you in five minutes.

I’ve done a lot of writing about these, curation, and also making them.
If you’re interested, please check out the links in this slide! 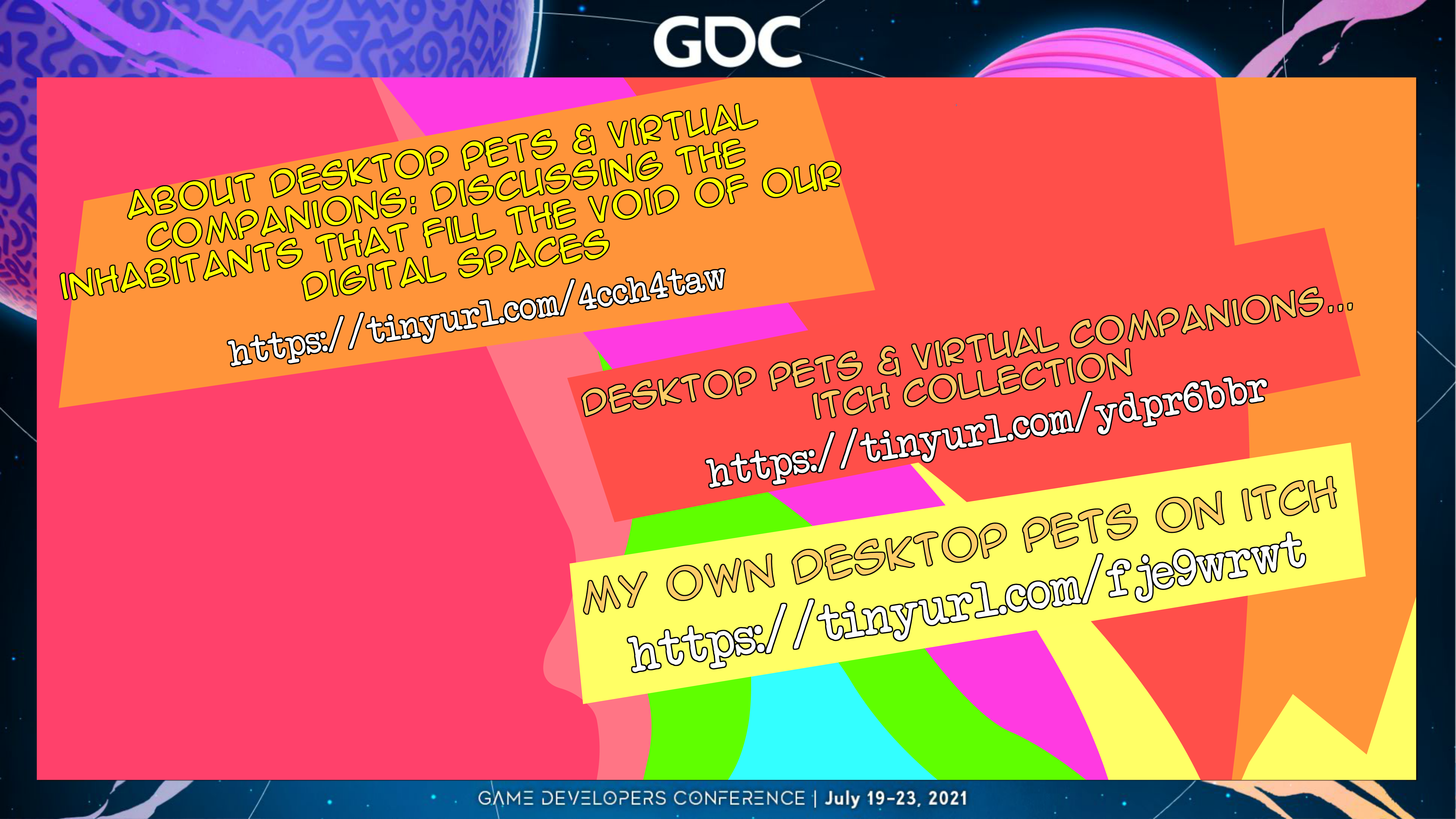 Our desktops, digital spaces, and virtual environments that we either work or play in are spaces that we spend A LOT of time in.
I spend as much time on my desktop, working, writing emails, reading… as I do anywhere else in the real world. That said, I think it’s really interesting how invisible these spaces are to us.

The time we spend in these virtual environments is real. It’s part of our life. We form memories and experience meaningful interactions in them.
I find it interesting tho how obsolete they end up feeling when that’s all said and done.

A really fascinating era to examine for how we relate to computers is the early 2000’s. I like pointing at this time because that’s when we had different expectations for things like the desktop.
People viewed these spaces as a “Home” (we can still see that in some of the naming convention that’s left over).
Back then, there were thriving theme-ing communities that would theme everything from the icons, cursors, screensavers, and even the bootup screen. People shared these, and it was tremendously popular to completely customize spaces like the desktop. Your computer really felt like YOUR’S. Your home.

Theming was really important to people. A good example that everyone knows is Winamp skins. This was normal to try to do with software that you used a lot.
It’s interesting to contrast all that to today’s modern desktop experience, where it feels more like you are renting it from either Microsoft or Apple, and not so much living in it anymore.

Either way, it was during that era that desktop pets really came into their own.
These were little inhabitants, friends, pets, some silly little sign of life that people populated their spaces with.
They were tremendously popular. Geocities websites were dedicated to finding and curating them.

I think desktop pets, screen crawlers, screen wanderers, prank software… all these silly little apps that let your digital space be occupied by something unusual, also occupy an interesting space in computer culture.
They’re kind of at the intersection between software and games. They’re something to make your space less lonely, more like an environment meant to live in, have fun in…
They are part of our desire for customization. They’re also part of our desire to make these spaces more than just a space that maximizes productivity. There’s a transformative quality to all this that’s really important to learn from.

As game designers we can learn a lot from desktop pets, and just that general era of computer history.
The way we interact with computers, what we expect from them, the way we “live” on them… has changed a lot. Our modern mobile and desktop experience is a lot more corporate. Silly little icons and goofy software has been replaced with banner ads, fluid design, modern UI… but it’s so fascinating when you take expectations from older computer eras and re-introduce them to people today.

Our relationship to computers is constantly changing, but there’s still such a strong desire from people to view these spaces as more.

These virtual spaces lend themselves to so much more than just an environment to run packaged apps on, that all exist in their own window… the virtual space, itself, can be the environment where your game takes place. Games can exist outside of the confine of their packaging. They can be aware of the space they are played on.

I’ve explored this tangent a lot in my own work with games like Cyberpet Graveyard, which is a “haunted” set of folders that you explore and find inhabitants in. It breaks the fourth wall for how it lives on your machine.
Or a game like A_DESKTOP_LOVESTORY where you help two files fall in love by helping them pass love letters back and forth… both of these examples take place on the actual desktop, existing on the player’s system in a really self-aware way. Like the computer is the home of these games, and that’s where the story is being told.

This is why I think older computer novelties like desktop pets are such a meaningful era to explore. For how we used to think it meant to live and play on a computer. There’s still so much unexplored potential if you step away from how we’ve kinda come to take all these spaces for granted.

Our digital spaces truly are more than a two dimensional space. They are real, meaningful environments that can be home of more than standalone apps that run in their own windows. They can be a world in themselves for you to explore as a designer. Figure out for yourself what it means for a game to exist here.

That’s why I think desktop pets are so meaningful. Please make one! You’ll be surprised by how much people will love them.
Thank you!