The project is playable here: https://alienmelon.itch.io/runonce

For reasons mentioned on the project’s page, and at the bottom of this dev post, I pulled out of DeleteGDC. For the sake of awareness, I encourage you to read it.

I’m participating in Delete GDC! Yay?
What I make will be shown there for one night, and then destroyed.

The idea of Delete GDC is that a selection of games, made specifically for this event, will live for five hours and then be deleted at the end of the night. The photos, videos, and any documented record will be the only thing that remains of them.
They will also only live on in memory.
It’s somewhat of an awareness initiative for the importance of electronic preservation. As far as I vaguely remember… Ok, either way, that’s what my thing will be about.

When I was invited to participate I was very hesitant because I really value my work. I invest a lot of time in keeping it current, and not letting anything “die”. I even backup like I’m paranoid. So the entire concept of making something that will only live for five hours seems way too edgy.

At the same time all my work will die someday. This is the nature of digital work. Nothing will live forever, especially not our small indie games.
At least not with the current state of electronic preservation.

Going counter to what makes me comfortable, for this delete jam I’m going to invest actual time and resources into making something good… as if it’s intended to last and not live for just one night.
I’ll also document the project on Twitter, so it lives on in memory there and on this blog.

As is the case with digital preservation, and nostalgia… If people like this enough, and fall in love enough with the character, I will monetize your love for it by making you pay to re-create it after it’s been destroyed.
I’ll probably do a small fundraiser on itch. It wont be a lot. The entire thing is going to be a fun little performance, hopefully to bring some awareness to the importance of digital preservation.

What will my entry be about?

My #deletegdc will be a small desktop friend that is aware that it’s going to die.
It doesn’t want to die. You must console it. Kind of provide comfort to it for the five hours that it will be alive.
If it likes the things you tell it, it will make small art out of your quotes and save those to the desktop as images.
It will leave something of itself behind in the form of reassurance, hope, acceptance, or love that it gathered while alive… over the course of the night.
People that interact with it will form a bond with it and not want it to die.

I don’t want it to be heartbreaking, but I think this will be a good space to explore accepting the inevitable and loving what you have while you have it.

After it has been deleted, I will run a fundraiser to monetize your love for it and bring it back (on itch). It won’t be a lot of money (about $150). Just enough to cover for time + resources. (lol I hope you’ll love it enough, because I really WANT to re-create it.)
The re-created version will be just like this one.

I’m thinking it might be cool to allow everyone to only be able to run it once, and then never again. So even after it’s been re-created, you can’t REALLY keep it.
(…in keeping with the existential gist of all this)

Overall I think this is a good performance piece for how digital preservation VS. intellectual property works. You never really own the thing you love. You only own the memories of it, and that brief moment that you are able to hold on to it.

This is the character:

(larger version of it here)

Updates will be shared here (bellow) and on Twitter…

The name of this “game” is: RUNONCE (remember_me)
More art of it is here: DELETEGDC directory

RUNONCE (remember_me) is 100% done!
a introspective existential desktop friend made for Delete GDC
Here are some videos of it…

The character will walk around the desktop, talking to you:

Sometimes it will make a comment, and then ask you for your input. This will either be just saving something out that it thought is worth remembering, or asking you for input first…
So playing it is kind of a conversation.

There will be a dialogue system. In cases where it wants your input, it will ask you a question, and you fill in a response in the field that appears at the bottom of the screen:

If you answer, it’s going to make a small artwork out of it, and save it, and then thank you. Sometimes it will reject what you say because it didn’t like the answer. 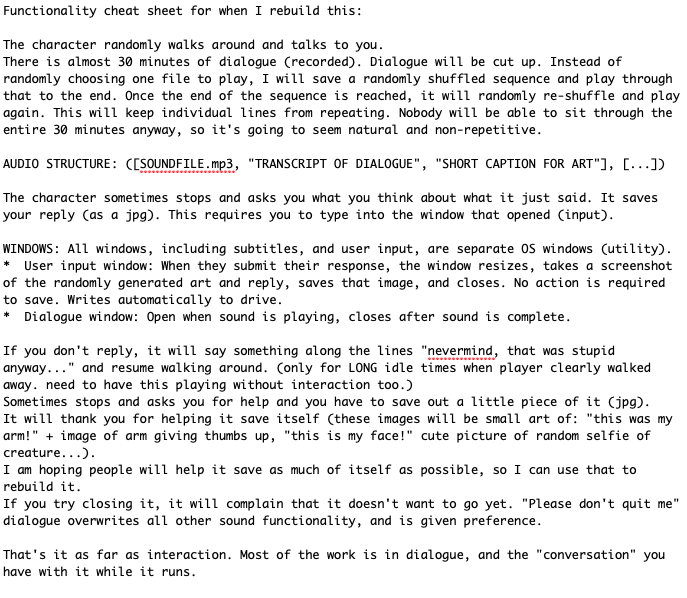 Some examples of the dialogue…
Turns out that writing dialogue for something that you know is going to die, makes the dialogue like super real. Lol, it’s so good.

for when i re-build this (if it reaches a financial goal)…
will make it so that it runs only once, and never again (to keep with the delete theme). if you try re-opening it after its “virtual death” you get a small gravestone with the date that you closed it, and a cute message.

about what i'm making for #deletegdchttps://t.co/9fqELfEQoH
this will be playable for one night only at gdc, alongside games from other cool devs, and then deleted at the end of the night. ?????
[i'll be posting updates to this thread] pic.twitter.com/SBJj25XqhK